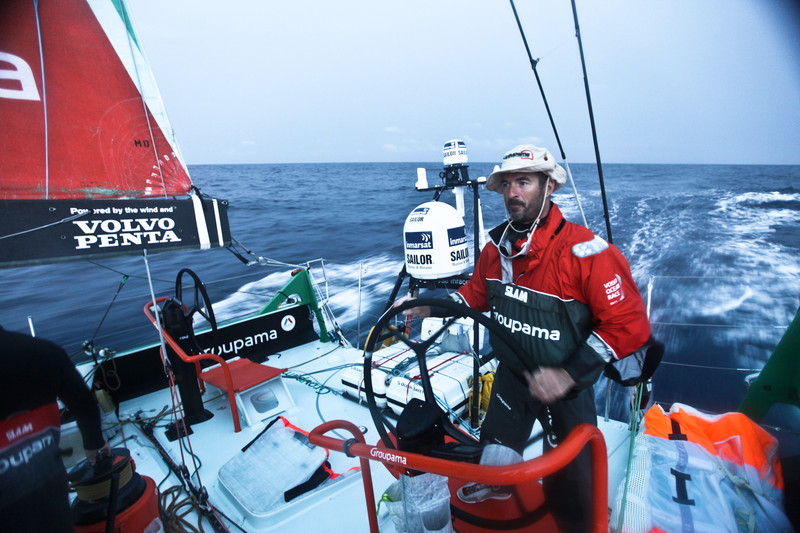 Caudrelier and Foxall were on the Groupama boat that won the 2011-12 edition. The Irishman was the natural choice when Dongfeng’s skipper looked for an experienced sailor to bolster his line-up for the 6,776-nautical mile (nm) stage from Auckland to Itajaí, Brazil, through the Southern Ocean and round Cape Horn.

Foxall, who has competed in four previous Volvo Ocean Races, arrived in Auckland fresh from victory in the EFG Sailing Arabia – The Tour (SATT), sailing with the renowned French sailor, Sidney Gavignet. He said on Thursday that he was thrilled to link up again with Caudrelier, who has guided his China-backed team to joint top of the current race standings.

“I am delighted to be back ‘in the saddle’. This will be the 10th round-the-world event that I will be involved in and my eighth rounding of Cape Horn,” he said. “It is a privilege to have the opportunity to join Charles and the boys onboard Dongfeng who have been doing such an exemplary job. My role is to fit in as seamlessly as possible and to bring the benefit of a fresh person to the team.

“It is hard to overstate the difficulty of the Volvo Ocean Race for the sailors and teams, the longest sporting event in any sport, and it is exactly this, the duration, that makes it so hard. A planned rotation of the crew at key times has become a crucial part of any successful team's strategy.”

Caudrelier agrees. “This leg is going to be a tough, freezing cold, with big seas and strong winds – only the toughest sailors can endure it,” he said.

Foxall could not be joining the race at a more challenging time. The first three boats finished the 5,264nm Leg 4 within just over eight minutes of each other after 20 days at sea with MAPFRE (Xabi Fernández/ESP) becoming the fourth team to win a leg.

Dongfeng Race Team won the second leg into their home port of Sanya from Abu Dhabi in January.

Foxall will replace Thomas Rouxel (FRA) on this leg, continuing the crew rotation programme set by Caudrelier to ensure his eight-man crew are fighting fit and bringing fresh energy into the team.

Navigator, Pascal Bidégorry (FRA), is back and will undoubtedly find the Southern Ocean leg less painful than being rested on land as he was for Leg 4. Caudrelier has yet to confirm which of his Chinese sailors will sail in the forthcoming stage.

The crew will be announced next week for the leg, which sets off on Sunday, March 15.