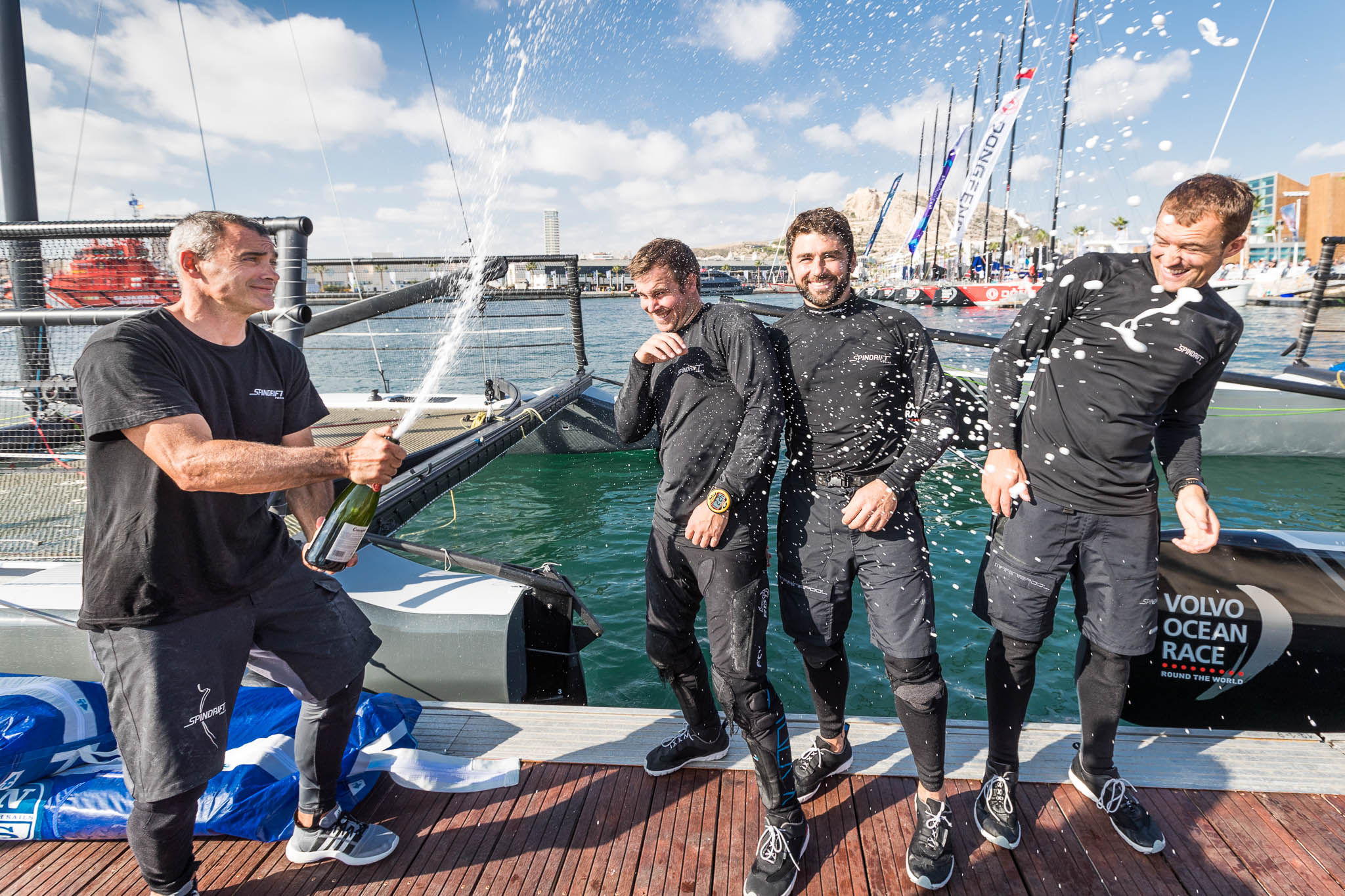 Alicante, Spain (October 15, 2017) – On a day when you couldn't have asked for better sailing conditions, Yann Guichard's Spindrift Racing rounded off a flawless display with victory at the Alicante Match Cup.

Guichard defeated Dutch two-time Olympian Pieter-Jan Postma in the final to maintain an impressive 100 per cent win rate during the four-day regatta, held in conjunction with the start of the 2017-18 Volvo Ocean Race.

The weather gods saved their best until last, delivering a 10-12 knot breeze and bright blue skies for the final day of action that saw the M32s able to really stretch their legs. Again the fleet of seven 65ft Volvo Ocean Race boats provided a stunning backdrop as they held their own Pro-Am racing just offshore from the M32 race course.

Guichard and Postma then showed their strength in the semis, the Frenchman easing past Warrer 3-0 while his Dutch counterpart only dropped one race in a 3-1 win over Edegran.

The finals began in dramatic style with Postma penalised in the pre-start of the first race for not keeping clear of Guichard as port tack boat, a mistake he never recovered from.

Race two saw Postma again hit with a penalty before the starting gun, and in a repeat of race one Guichard was free to sail the course untroubled.

With Guichard poised at match point in the first-to-three clash, Postma led off the start line of race three but by the first upwind cross the Frenchman was back in control. Postma was powerless to stop Guichard extending away and claiming his third victory on the bounce, and with it the regatta title.

A delighted Guichard said the result was just what his team wanted going into the 2017 WMRT Match Racing World Championship in Shenzhen, China, in under two weeks.

“It's been a huge performance from Spindrift Racing at this event,” he said. “We came here with a lot of things to work on, especially the starts. We won all of our races and the event, so it's been a great regatta for us. It's an incredible confidence boost for us, a fantastic feeling. The big event is the World Championship in China and we're focused on that. Our goal for China is to perform well and to reach the final.”

Postma, meanwhile, was happy to settle for second.

“It was an amazing day – lots of races and lots of action,” he said. “We were really happy to have been here in Alicante, enjoying racing against an awesome bunch of guys. Yann Guichard is a quick man! We just couldn't take them down. We're very happy with second place though.”

In the petit final Warrer proved too strong for Edergan, defeating him 2-0 to complete the podium.

The Alicante Match Cup was the result of a collaboration between the Volvo Ocean Race and World Match Racing Tour, uniting two great sailing events.

“This regatta is what it's all about – two great events sharing one stage,” Guichard added. “Mixing inshore multihull racing and offshore racing like this is a great thing for the future of sailing.”
FINAL STANDINGS