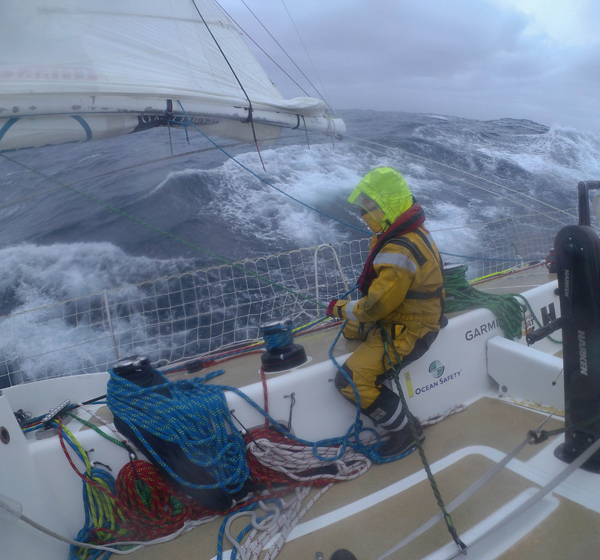 After another exhilarating day of surfing down South Atlantic waves for the Clipper Race fleet, focus on board has very much turned to the Race 2 Elliot Brown Ocean Sprint.

Just before it was due to become the first Clipper 70 to enter the western gate of the Ocean Sprint, Greenings activated Stealth Mode, meaning its position will remain hidden for 24 hours, until 18:00 UTC this evening.

With Greenings hidden from public view, Garmin has moved into first place. Garmin, which earned a bonus point for setting the third fastest time in the Elliot Brown Ocean Sprint in Leg 1, commenced its Leg 2 Ocean Sprint at 21:25 UTC on Friday night.

Garmin skipper, Gaetan Thomas, reported from on board: “We entered the Elliot Brown Ocean Sprint yesterday evening, so let's keep the speed up! Anyway, why would we drop the speed?

“We are flying now on the residual swell from the prevailing winds, which can give us some nice little surfs.”

Dare To Lead began its Ocean Sprint shortly after Garmin, and is in second place on the leader board. However, it hasn’t all gone to plan so far, as skipper Dale Smyth explains: “As we crossed the line, we had an unfortunate squall, we broached, blew the tack on the Code 3 (heavyweight spinnaker) and recovered it, to our horror, in tatters!

“The scale of repair was too grand for our small on board machine in the time given before Cape Town. What a disastrous way to enter the Elliot Brown Ocean Sprint!

“We limped along all night under white sails and are hoping that conditions will not be too well suited to our Code 3 from here on in.”

Elsewhere, there have been some big jumps up the Race 2: Stormhoek Race to the Cape of Storms leaderboard overnight, with Liverpool 2018 moving from ninth to third. Visit Seattle has hung onto fourth place, whilst Qingdao from jumped from 10th to fifth.

Despite the leaderboard shift, there have been multiple on board challenges for the team of Liverpool 2018, as skipper Lance Shepherd explains: “My crew and I have been helming in the dead of night, on the wrong wheel, with no compass lights, and no stars, whilst our generator has been offline and the engine has been pumping dirty fuel into the tanks.

“However, because we are Team Liverpool 2018, we have continued to do our best and not give in. The wind has now come back and is hitting 26 knots and the crew are sailing well.”

Understandably with bonus points on offer, most Skippers are keeping their tactics close to their chests this morning, with the skipper of the sixth placed Sanya Serenity Coast, Wendy Tuck, saying: “We have now started the Elliot Brown Ocean Sprint, and what a fine, fine morning it is to start one.

“The stars are out; it’s pretty chilly on deck but very nice. I can’t tell you what sail plan we have up, but we are sailing nicely.”

Nasdaq is in seventh position, followed by HotelPlanner.com and GREAT Britain. Unicef is still attempting to make ground up on the main pack following their spinnaker wrap, whilst PSP Logistics is continuing to race hard, with skipper Roy Taylor reporting: “By the next blog, we aim to be less than 3000 nautical miles to run, which all things considered will be a pretty big milestone for us (600 miles in eleven days).”

The bulk of the fleet is expecting to slow down over the next 24 hours as the weak ridge extending from the high behind the pack rotates over the leading teams. The fleet is still expected to have some breeze, but it will be quite fickle, and teams will need to work hard to keep any good speeds consistent.