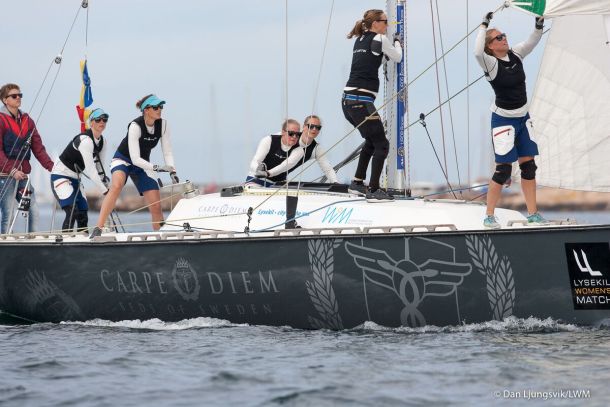 World #1 Camilla Ulrikkeholm Klinkby has four consecutive victories in Lysekil Women’s Match, now aiming for a fifth triumph. But with seven of the eight top skippers on the ISAF world ranking present at the event, her mission for the week is not the easiest one. Home sailor Anna östling is among the skippers with best chances to stop the Dane.

“Camilla gave us a really hard time during Monday’s practise session, but rather now than later this week,” the Swede smiles.

“We’re here to win again, nothing else,” Ulrikkeholm Klinkby confirms.

When Camilla Ulrikkeholm Klinkby and Anna östling clashed in a couple of fierce fights during Monday’s practise session at the waters of Lysekil, it was like no time at all had passed since last year’s exciting final. Then, 51 weeks ago, they met in five thrilling final matches that showed all the tricks the two most skilled match racers in the world possibly could perform. Scandinavians in general, and Ulrikkeholm Klinkby and östling in particular, are namely experts in the DS 37s, the boats used at match racing centres in their respective home clubs: the Royal Danish Yacht Club and the Royal Gothenburg Yacht Club. Out of breath the spectators in 2014 saw the Dane winning the fifth and ultimate match for her fourth consecutive Lysekil Women’s Match victory, a series she is now aiming to complete with a fifth triumph:
“We love the DS 37s, no doubt about that. When Anna asked us to practise together we immediately accepted. Both gain from it, and that’s OK” Ulrikkeholm Klinkby explains.

Last weekend she practised with östling’s fellow club member Caroline Sylvan, ranked 7th in the world and another sailor able to seriously fight for a podium position in Lysekil Women’s Match. Neither French World # 3 Anne-Claire Le Berre, nor her compatriot Pauline Courtois, can be counted out. Both have recently climbed the ranking, and have their sights set on the top spot in the Swedish WIM Series event.

World #4 Stephanie Roble secured the bronze medal in the Worlds a month ago, and has spent the time since coaching back home in the USA, together with team member Maggie Shea. Now she’s enjoying being back in match racing again:
“Every year we’re really looking forward to Lysekil Women’s Match. It’s a great event on a beautiful venue, and I have a very strong team,” she says, revealing that experienced match racer Sally Barkow will call her tactics.
In 2004 and 2005 the World Champion title went to Sally Barkow, who just finished Volvo Ocean Race on the Swedish all-female SCA boat.

Juliana Senfft is the first South American ever in Lysekil Women’s Match, and she was happy sailing the DS 37 for the first time:
“I’ve never before raced boats as big as these, but we ran through all boat handling and got a good feeling. We enjoy being here, I’m sure we’ll have fun during the week and then we’ll see where that takes us,” the Brazilian says.

WIM Series Manager Liz Baylis is also happy to be back in Lysekil, for the event that concluded the 2013 inaugural WIM Series:
“The Lysekil Women's Match is always a favourite on the WIM Series, combining a spectacular sailing location with the powerful DS 37 class yachts and an incredible festival on shore” she says, continuing:
“The competition on the water is always top-notch in Lysekil, but it is also rivalled by the high standard shown by the scores of volunteers from LSSG who work with the event organizers, Sailnet, to put on an incredible event. And they all do it with big smiles on their faces! It is a pleasure to work with them.”

Camilla Ulrikkeholm Klinkby, DEN, 1
Having four consecutive victories in Lysekil, 32 years old titleholder Camilla and her crew are the unquestionable queens of the event. Since 2003 this smiling Danish sailor has concentrated on match racing, keeping her ranking as one of the world’s best, but her career started in different dinghies. Camilla’s speciality is the big DS-boats that are raced in Lysekil, as well as in the training centre of her home club KDY in Skovshoved. Camilla is an architect who has just become a mum for the first time.

Anna östling, SWE, 2
She started as a match racing sailor on foredeck, but in former America’s Cup challenger Magnus Holmberg’s Sailing Factory, now 31 years old Anna östling of the Royal Gothenburg YC found her interest in helming rise. After her Olympic debut in Weymouth, she finished runner-up in the 2013 inaugural WIM Series season. Last spring Anna became a mother for the first time, and just a few weeks later she took the 2014 World Championship title. But in the 2014 WIM Series Anna finished second.

Anne-Claire Le Berre, FRA, 3
In 2013 33 years old Anne-Claire Le Berre from Brest on the Atlantic coast of France became National Champion on her home waters, and followed up with a victory also in the 2014 Championships. Her latest results in Lysekil are sixth places in 2013 and 2014. Since 2005 she has been into match racing, ranked number 3 in the world as best, and before that she did an Olympic campaign in the Yngling. Anne-Claire is not only a skilled sailor, but also a naval architect at renowned design company FinotConq.

Stephanie Roble, USA, 4
26 years old Stephanie Roble started sailing dinghies and scows out of Lake Beulah YC, where she was a successful junior sailor. Later she picked up match racing and fell in love with the fast paced game. Together with Maggie Shea she became in 2012 the first woman to win both the US Women’s and the Open Match Racing Championships. Last year Stephanie Roble won the Etchells Worlds and the US Women’s Match Racing Championships, and took the bronze medal in the Worlds. This year she also finished 3rd.

Pauline Courtois, FRA, 6
26 years old sport teacher Pauline Courtois from Brest started sailing at seven and racing at nine. She has been in match racing on different positions since 2011. In 2013 she finished runner-up when calling the tactics for Julie Bossard in the WIM Series event in St Quay, and took a bronze medal in the national championships. Pauline made her skipper debut on the WIM Series in 2014, and will this year race in Lysekil for the first time. Her favourite boat is the RS 800, and for match racing the Elliot 6m.

Caroline Sylvan, SWE, 7
As “everybody else” in Sweden, 26 years old Caroline Sylvan began her sailing career in the Optimist and Europe dinghies, participating in Nordic and European as well as World Championships. After twice becoming national champion in Laser Radial, she began match racing in 2010 and immediately won the Youth National Championships. In 2012 Caroline took the bronze medal in the European Match Racing Championships, and finished fifth in Lysekil. Last year she finished fourth in the Worlds and in Lysekil.

Klaartje Zuiderbaan, NED, 8
Dutch veteran match racer Klaartje Zuiderbaan, 42, is an engineer who became the European Champion in 2000. In 2006 she was ranked second in the world, and two years later she scored her last victory, winning the Grade 1 match racing event in Trentino, Italy. After coaching the Dutch Sonar to a gold medal in the Paralympics in Weymouth, she came back to match racing and finished 7th in WIM Series last year. Klaartje also sailed the Volvo Ocean Race on Amer Sports Too in 2001-02.

Annabel Vose, GBR, 13
20 years old Annabel Vose is an experienced dinghy sailor and 420 World and European Champion, studying Engineering at the University of her hometown Southampton. Last year she won the World University Match Racing Championship as well as the British Youth Match Racing Championship, and finished 10th on the WIM Series. This year will be her first in Lysekil. Annabel has also raced many different keelboats, becoming Quarter Ton Cup Champion in 2011 and in 2013. Older skippers better beware!

Sanna Häger, SWE, 18
27 years old Swede Sanna Häger is a newcomer on the match racing circuit, but with a lot of experience from various dinghy classes. She learned sailing on the Lake Mälaren, and is hence an expert in the shifty and gusty wind conditions that often prevail also in match racing. Sanna has now formed a team of six girls, with the ambition during 2015 to get into the top-10 on the ISAF women’s match racing world ranking. Until now they’ve only won local events on their home waters.

Alexa Bezel, SUI, 21
On the west coast of the elongated Lake Zürich, right where the ferry to Meilen departs, is the home waters of Swiss Rookie Alexa Bezel, 24. She is a language talented person, managing to keep her French and German speaking crew together. Their sailing background is in 470 and Laser as well as in keelboats and multihulls. In 2012 they came to Grade 1 event Lysekil Women’s Match and shocked everybody, beating many higher ranked sailors for a surprising second place. Now they’re back on the WIM Series!!

Juliana Senfft, BRA, 26
As a full-time sailor for the Brazilian navy, 26-year old Juliana Senfft spends a lot of time on the water, exercising and practising to improve her sailing skills. Having been in match racing since 2007, she took time off from match racing to try a 49er FX campaign for the 2016 Rio Olympics. Now the HA Sailing Team is aiming to defend the 2013 Nations Cup title from Middelfart, Denmark, and to compete on the WIM Series. Juliana Senfft will this year be the first South American skipper ever to compete in Lysekil.

Johanna Bergqvist, SWE, 111
Team X Match Racing is a brand new Swedish team from Gothenburg. Skipper Johanna Bergqvist has already, at age 19, competed at several international regattas in different dinghy classes. Members of Team X are between the ages of 18 and 21. Most have a background in dinghies but some also have experience in keel-boat racing. Team X was recently assigned a wildcard at Lysekil Women's Match this summer, and is now determined to train hard to achieve the best possible result.