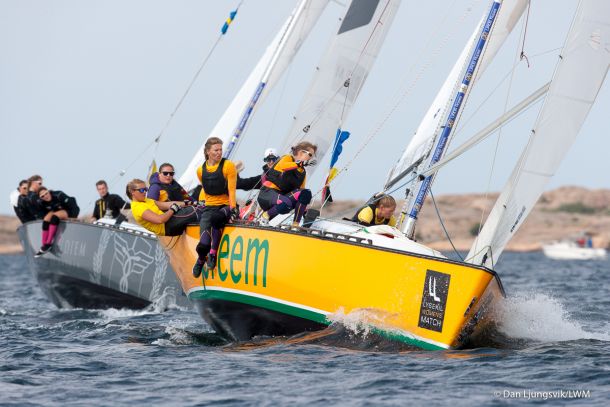 Local hope Caroline Sylvan is undefeated and alone at the top of Lysekil Women’s Match, the second stage of the 2015 WIM Series, after a first day severely shortened when the wind died just before lunch. Although French Anne-Claire Le Berre has three victories in as many matches, she also received a 0,5 point deduction after a collision. However, Sylvan describes an essentially perfect day on the racecourse:

“We’re sailing really well and everything works perfectly aboard. We’re solving all problems and finding the right wind shifts and tactics,” she says, especially satisfied having beaten fellow club member and World #2 Anna östling of the Royal Gothenburg Yacht Club.

“Our fault, we made a mistake. We had the match and should have won, but just a small mistake is enough when the margins are as small as here,” a sighing östling notes.

Lysekil Women’s Match started Tuesday morning in perfect sailing conditions, with southerly winds up to 15 knots and a Swedish high summer temperature that tempted large spectator crowds to occupy the cliffs and the promenade surrounding the waters of Lysekil.

Unfortunately the unusually warm weather also caused the race committee some problems, as the wind disappeared at lunchtime. After a fruitless waiting for at least a small puff, further racing was finally cancelled at around six, without any races at all for the half of the field that didn’t race in the morning matches.

As early as the very first match there was still enough wind for Anne-Claire Le Berre to be able to bump into Swede Johanna Bergqvist’s boat so badly that it caused damage. For the French that collision not only caused her a 270 degrees penalty turn, but also a 0.5 point deduction. Now she’s on 2.5 points in the results:

“We had a really good day anyway, and we’re very pleased with our sailing,” Le Berre comments.

Annabel Vose made her Lysekil Women’s Match debut, and got herself a victory over another newcomer, Sanna Häger of the Swedish capital Stockholm. The greatest challenge for the British team was to master the big DS 37s, raced with a crew of six:

“Everything happened a lot faster than we’re used to, but we learned so much and are really positive and happy, looking forward to meeting the rest of the teams,” Annabel Vose says.

Lysekil Women’s Match continues Wednesday and Thursday with the round-robin, before Friday’s quarter finals and Saturday’s semi finals and final.