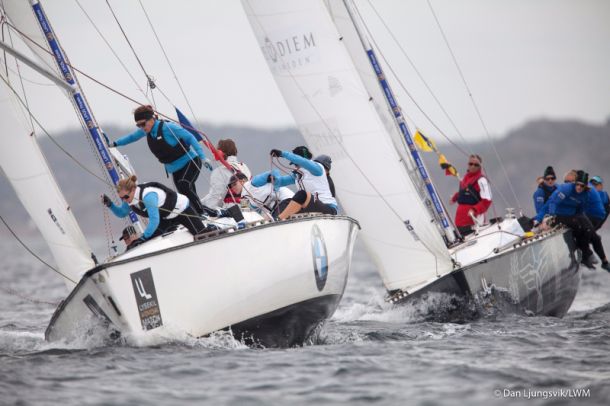 06/08/2015
American Stephanie Roble is on fire at Lysekil Women’s Match, the 2nd stage of the 2015 WIM Series. An intense Wednesday with eight matches and as many victories, puts her at the very top of the leader board.

“Including the practise day this was just our second day of real sailing this week. My team made everything really smooth, and that was the key today,” Roble says.

“Everything we do is done in exactly the right way. We’re trying to be one step ahead, covering our opponent also when our lead is substantial,” she explains.

Wednesday offered the race committee and the sailors steady winds that lasted for the whole day, which made it possible to catch up in the programme after a Tuesday afternoon with no wind on the Swedish West Coast waters. Stephanie Roble was among the sailors sailing the most matches, but that obviously didn’t concern her at all. World #1 and reigning Lysekil Champion, Camilla Ulrikkeholm Klinkby of Denmark, was one of the opponents that had to give up against the US force.

“We weren’t aggressive enough and gave Stephanie too much room in the prestart. That doesn’t work against a skipper as skilled and ready to use even small mistakes,” the Dane notes.

Ulrikkeholm Klinkby is third so far in the regatta, after this only loss and seven wins besides.

World #2 Anna östling of the Royal Gothenburg Yacht Club won both her Wednesday races, now holding fourth place in the round-robin on four wins and just a single loss. After their Tuesday loss against fellow club member Caroline Sylvan, the östling team analysed their performance and decided to have another attitude Wednesday.

“It was our fault we lost yesterday. Today we performed flawlessly and with great confidence, with our usual high technical standard,” östling comments, valuing tight racing also in the beginning of the round-robin:

“We will gain from that later this week,” she hopes.