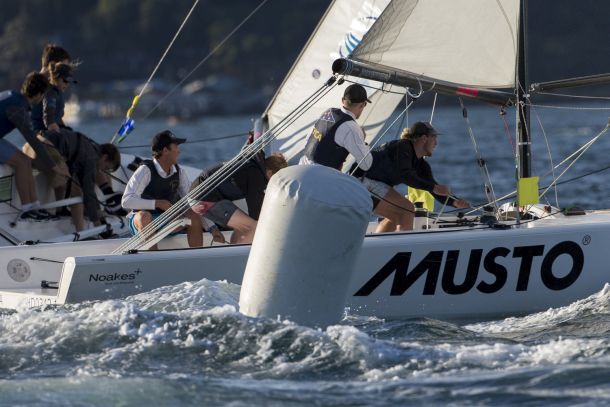 Parker and Price fighting it out in the final match of the championship. Photo Andrea Francolini.

“It’s great to have this result after such a mix of condition over the weekend,” Price said after finishing on top of the round robin with eight wins. Unfortunately the conditions only allowed for one round robin to be completed with no time for semis or finals.

Rounding out the podium places was Royal Prince Alfred Yacht Club team of Malcolm Parker, Evelyn Foster, Sam Treharne and Harry Hall. Parker’s last race of the day was the one to determine the podium positions and with Price taking the win, this relegated Parker to third place.

Race Officer Darryl McManus had another tough day battling shifty conditions and trying to push through the required matches. Conditions were similar to those experienced on Saturday, but the glass out in the middle of the day lasted a little longer with the Elliott 7s waiting at the dock. The north-westerly breeze came in at about 10-12 knots just in time to get the last ten races in to complete the round robin before the time limit expired.

“The CYCA team of volunteers on the start boat did a fantastic job over the duration of the weekend in trying conditions,” McManus said. “It was great to have Commodore John Cameron on board for the final matches on Sunday to watch the CYCA not only take the win, but to also witness the racing spectacle provided by competitors.”