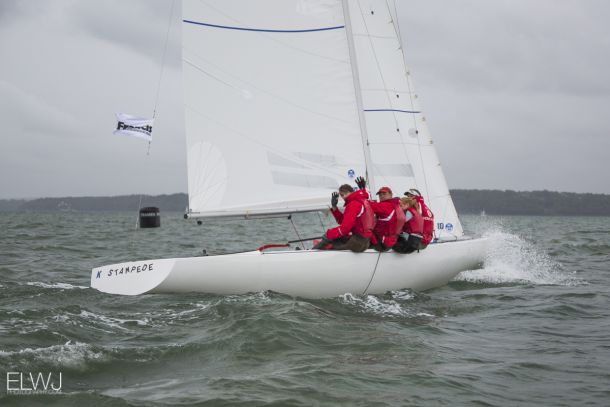 Cowes, UK, August 3, 2015 – The second day of the Etchells Invitational Regatta for the Gertrude Cup saw more intense competition, including an incredibly tight finish in the second race that saw the four leading boats cross the line in just three seconds. With a discard having kicked in following the completion of six races, Mark Thornburrow’s team from the Royal Hong Kong Yacht Club, with crew of Laurence Mead, Malcolm Page and Charlie White, remain overall leaders in this high-scoring series, despite a disastrous first race in which they languished near the back of the fleet.

The first race of the day started in a south-south-westerly breeze of 17-19 knots, with a strong east going stream helping to keep teams behind the line. However, a right hand wind shift less than two minutes before the start saw competitors bunched close to the committee boat. At the gun, Curruthers was over the line and recalled, while Mark Thornburrow’s Royal Hong Kong Yacht Club team also returned, even though they were just on the correct side of the line, It was a move that might have cost them a top position in this race.

At the end of the first lap three of the teams of young sailors were leading the fleet. Fiona Hampshire’s Royal Thames Yacht Club Youth Academy boat held a tenuous lead from another youth team, Jack Wilson’s Trinidad and Tobago Yacht Club entry and local sailor Matt Reid from Spinnaker Sailing Club, all three boats reaching the leeward gate within two boat lengths of each other.

At the end of the final beat, Hampshire and her crew of Arthur Henderson, Jack Davies and Honor Fell, was still looking well placed, but approaching the windward mark near the port lay line was forced to tack early by Reid. With the strong tide setting the boats onto the buoy she hit the mark and had lost several places by the time she had completed her penalty. This left the door open for Chris Hampton’s Melbourne, Australia based Royal Brighton Yacht Club Team, crewed by Ian “Barney” Walker and Ben Morrisson-Jack, to take their second win of the event, just ahead of Reid and Wilson.

The next race saw the fiercest of battles for the lead –one that was not to be resolved until the finish line. After a tight contest right round the course, running into the finish, three teams – Anthony O’Leary, Robert O’Leary and Julia Bailey’s entry from the Royal Cork Yacht Club, Tom Carruthers and Jean-Claude Strong – were very tightly bunched. Meanwhile Reid was a few lengths to leeward and powering towards the line at a higher angle to the wind. All four boats were overlapped at the finish, with Reid holding a two-metre advantage over the Irish boat, while Carruthers and Strong finished just moments later.

The day’s racing took place as the tide changed from an east-going stream to a west going one. Therefore, in the early races the right hand side of the beat tended to be favoured, but by the final race of the day the left hand side of the upwind leg had a strong tidal advantage, which caught out two of the opening day’s four best-placed teams.

By this race, however, Thornburrow had recovered much of his form from the opening day, leading for the first lap of Race 6, until a botched spinnaker drop saw his crew drop five lengths behind Jan Muysken, David Bedford and Mark Lees Emirates Palace Yacht Club team. On the second run Thornburrow significantly closed the gap on Muysken, piling pressure onto his opponent. An untidy rounding at the leeward gate by the UAE team provided the opportunity Thornburrow needed to slip inside at the mark and gain an advantage that he held to the finish.

The day’s best performance was by Spinnaker Sailing Club’s Matt Reid and his crew of Jamie Diamond, Izzy Welch and Graham Sunderland. “Yesterday we were slow to adapt to the boat we had, and didn’t have our heads out of the boat enough, but today we were stronger strategically,” Sunderland says.

“Our starts were also much better today than yesterday and our manoeuvres were all good,” says Reid, “including gybe sets that opened up more options at the start of the downwind legs. With the wind more in the south-west it also felt easier to call which side of the course would pay, especially when we could see that other good local sailors were making the same decisions.

“For us the most challenging part today was maintaining our lead in the race we won, as the fleet was split right across the course, which made it really hard to defend our position. Looking ahead, we already have two big scores to discard, so the challenge will be to maintain consistency.” With big winds forecast for the third day of racing that’s a thought that’s likely to be on the minds of many competitors.