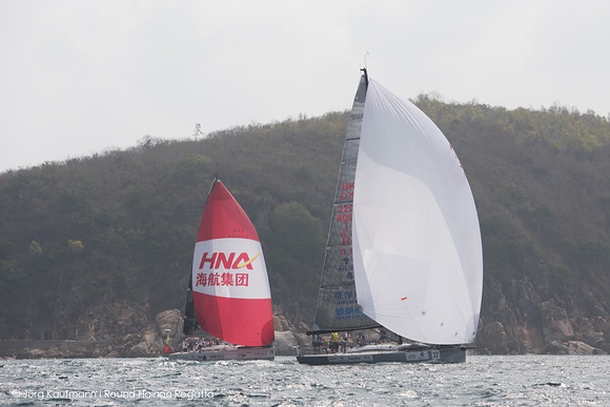 Racing in the Round Hainan Regatta. Photo Go4Image.

By crossing the line at 20:26 on Monday evening, Chinese flagged Ubox took line honours in the first 300nm offshore leg from Sanya to Haikou, Lei Wang's Swan 82 also set the new race's reference time. RHN Dubois50 Sanya, skippered by Jim Johnstone, gets on top of the IRC1 scoreboard in corrected time while Archambault 40 Seawolf closes in fourth overall and leads in IRC2. Smaller boats leave Sanya in the morning bound to Wanning, 120nm up the East coast for their offshore debut.

The tropical island of Hainan, with its stunning coastline and beautiful greenery, and the South China Sea provided the IRC 1&2 twelve boat strong fleet with a spectacular setting and array of sailing conditions on the first offshore leg from Sanya to Haikou. After a fairly quiet first day, on the last stretch North to the island's capital the crews were put to a test with stiff breeze, gusting up to 35 knots and big waves. Moreover, nearly all boats reported getting stuck in unmarked fishing nets, requiring some effort get untangled from.

On Monday at 20:26 local time, Shenzen-based Swan 82 UBox crossed the line in first, not only taking line honours but also setting the new reference time of 32 hours, 1 minute and 58 seconds. Shortly after midnight it was RHN Dubois 50 Sanya's turn to finish, followed by Archambault 40 Seawolf (IRC2) in third and one hour and 14 minutes later by sister ship Lingshui. Ubox's margin though was not enough to keep the top spot in corrected time. Class IRC1 leader is Sanya, with Lingshui in second and UBox in third. Seawolf easily got the gold in IRC2, distancing Shangui and Old Boy Dream. The fleet will have a lay-day tomorrow in Haikou before taking on the second leg back to Sanya via the east coast next Thursday. “It was a great leg, it's the first time that we can have the fleet sail non stop to Haikou to set the new reference time. The conditions were just perfect for an challenging, exciting and fought for race.” Declared race director Bernard Bonneau.

Meanwhile the smaller IRC 3/4/5 fleet left Sanya this morning set for their first offshore race, the 120nm route to Wanning, the attractive village with its modern and welcoming marina, situated on the east coast. As happened for their bigger “counterparts” on the opposite coast, they too encountered pretty hard weather conditions, 20 to 30 knots and big swell that forced no less than six boats to abandon racing. According to the race tracker at mid-afternoon the Mills41 Ambush (IRC3) was in the overall lead, with a slight margin on Yue Liang NV Shen (IRC4) and in third was Bavaria 40 Qihang (IRC5). The first boats are expected to reach Wanning tomorrow.