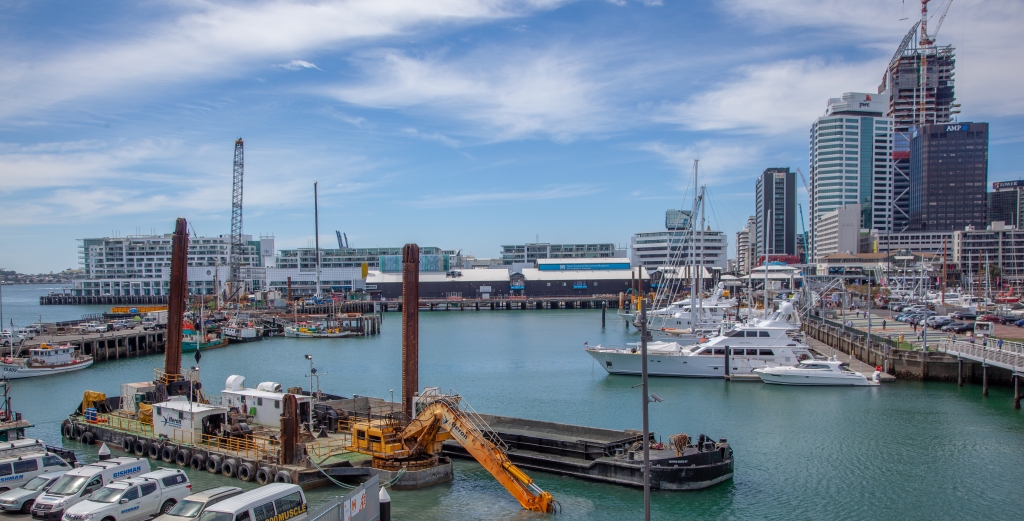 Dredging the Viaduct Harbour for the America's Cup.

It seems like a long time, but this is the America’s Cup and time is the biggest issue- you never have enough of it.

Every day is important. Is two years long enough?

“Not even close, we could use four,” explains America’s Cup veteran and Skipper of American Magic, Terry Hutchinson. “Every single day is already accounted for as we work and prepare for the 36th America’s Cup.”

Each of the teams will now be at varying stages of their individual design, development and testing in their respective campaigns towards 2021. But just what is going on behind closed doors right now will go a long way to defining success in two years’ time, according to Kevin Shoebridge, COO of the Defender, Emirates Team New Zealand.

“Historically, when you look back on who has won any America’s Cup, it is often decisions that have been made two years to 18 months previous that are the key to what your performance will be at the end when it matters.

“A lot of the philosophy and direction that you take is often taken quite early. So, decisions we are making today, decisions we have just made with the design of the first boat could be critical to the outcome of the America’s Cup. So, there is no slow ramping up to the big decisions coming later on. The big decisions are now.”

With this in mind, it is anyone’s guess as to who is better placed at this point in time. No one could know. But, according to four-time America’s Cup winner and INEOS Team UK CEO Grant Simmer, it’s not just making the right decisions, but how effectively you manage your time once they have been made, that matters.

“Normally if you manage your America’s Cup properly you run out of time at the same time you run out of money. You can sometimes find more money, but you can never find more time. So, managing time is a critical part of the program and this Cup is like any other – you have to time your developments to come online right at the end of the Cup.”

This all seems straight forward enough, until you start to add up the mountain of important milestones that need to be juggled and ticked off in the next two years and all of a sudden, the immediate and daily pressure on the teams is apparent, according to INEOS Team UK Skipper Ben Ainslie.

“We are up against it, so a lot of pressure is already on the team and the organisation to fulfil all of that. But that is part and parcel of the America’s Cup challenge, and that’s what makes it so exciting.”

Exciting indeed. Especially when the next most pressing milestone for the teams is getting their first AC75’s on the water and mastering their ability to race the giant foiling monohulls, a leap into the relative unknown.

“We have seen the smaller test boats out there warming up but to have the real scale 75-footer will be a big step up for all of the teams,” continues Ainslie.

“And then we go through a race circuit around the world and then into New Zealand in 2020 and into the Cup itself. Throughout all of that we have to bring new components online, and to try to really make sure they hit their deadlines so we can have our training and development schedule running as we want it. That’s probably our biggest challenge and then making sure we are absolutely maximising development times and opportunities that we have.”

It is pretty clear the arms race is on when you take stock of the pace the teams are working at around the world. Whether still in the infancy of setting up new teams like Malta Altus Challenge, DutchSail in Europe, or Stars & Stripes Team USA on one coast of the US, to American Magic on the other.

The East Coasters have been operating at a relentless level since they officially entered the 36th America’s Cup the very minute entries opened on the 1st January 2018.

Their focus now is eking out all the time possible on the water putting their “Mule” test boat through its paces by chasing seasons. Launched in the Newport Autumn, then moving south en masse, clocking up untold days in Pensacola, Florida for the winter.

“Everything that we are doing is developing either our Mule boat, or boat 1 or boat 2. There are so many items that are coming at us and so many choices that we are going to have to make as we work through this process, that you can easily see that as we develop our equipment, our sails, our foils that every day is going to be occupied,” explained Hutchinson.

Meanwhile, in Cagliari, Sardina, Luna Rossa has quietly been focusing on the many important design aspects of their AC75 with one specific item sticking out as key to their design success.

So much to do, so much to get right and that’s just to win the Prada Cup to therefore make the start line of the 36th America’s Cup Match in 730 days.

So, what do the teams hope to be thinking of on the start line for the 36th America’s Cup presented by PRADA on the 6th March 2021?

Grant Simmer: “I hope I am not thinking we didn’t take enough risk, with the America’s Cup you have got to take risk – weighing up risk and making good calls along the way. If we are too conservative with our decisions, we will probably fail. So, I hope we are not thinking that, and I hope I am feeling proud of what we have done to get us to this point and feeling proud of the whole team.”

Ben Ainslie: “Looking back on the start line of the 1st America’s Cup match – I won’t be looking back, I will be looking forward trying to win the race trying to beat the opposition because ultimately it’s a development race but when you get on the water it’s each team against the other and the best team will win out at the end.”

Max Sirena: “ I’ll tell you in 2021! When you get to the first day of the race you start a flashback on what has been done and you ask yourself if you have done enough or if you could have done anything different. In the end it all comes to time, what’s done is done.”

Terry Hutchinson: “On the starting line in Auckland, in two years’ time, I am looking back thinking about the hard work and determination that has gone into that moment . The process we have worked towards as a team to get to that moment. And really at that point I know from past experience it’s actually the easiest part of the competition because you are in the Match and from there you control your own destiny. You have created a boat that is fast enough to win and from there you just have to trust you have the gear the equipment and the people and let it happen.”

Kevin Shoebridge: “I hope at that point we feel we have left no stone unturned. That we have developed the right design tools, we have used our simulator correctly, done all the testing and basically taken every opportunity that is there, that’s what I will be hoping in two years’ time.”

It isn’t just the teams that are counting the days, the entire event infrastructure is also on a very tight timeline, but making good progress.

“The America’s Cup is going to bring vibrancy and excitement as well as visitors and jobs to the City, as Emirates Team New Zealand readies itself to take on the best in the world,” says Mayor Phil Goff. “With two years today until the first race takes place, Auckland Council and Government are working hard to put the necessary infrastructure in place.

“With the team village in the heart of the City and the races themselves visible from the shore, the event is going to be more accessible than ever to New Zealanders.

“AC36 will be the best America’s Cup yet, and we will have a great opportunity to showcase our city, our technology and sporting skills to the world,” Phil Goff said.

Resource consents are in place and the Wynyard Edge Alliance – the Auckland Council and New Zealand Government-owned agency created to drive the infrastructure requirements – is leading the delivery of a number of crucial construction projects.

The process of removing the storage tanks on Wynyard Point is nearing completion; Hobson Wharf is being extended; and the alliance has also started work on a breakwater along the western side of Hobson Wharf which will ensure the berths being built there will be as tranquil as possible.

Dredging of the outer Viaduct Harbour and its entrance channel are being done to make the area deep enough for syndicate race boats to access.

At the waterfront’s western end, 100-year-old Wynyard Wharf has been undergoing strengthening, so it can hold the weight of construction equipment and, eventually, the base cranes that will launch race boats.

Once complete, the work will have created bases for the six confirmed challengers, Emirates Team New Zealand, and Luna Rossa – the Challenger of Record, the wider village space, and on-water space for the race yachts and visiting superyachts to moor.

By mid-to-late 2019, when teams are expected to arrive, the result of the current work will be there for all to see.

All this progress supports the Alliance Mission; creating a stage for the America’s Cup and a waterfront destination Kiwis and visitors love.