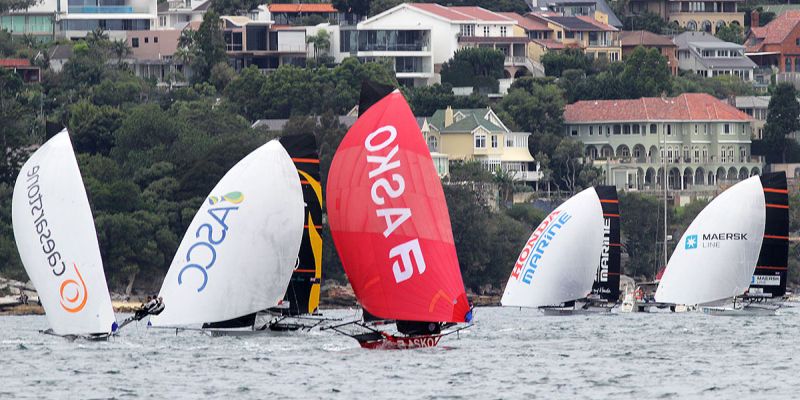 Asko Appliances leads the fleet down the first spinnaker run in Race 6.

The New Zealand 18ft Skiff teams ASCC and Honda Marine shared the honours with comfortable wins in Races 6 and 7 on Day 5 of the Winning Group 2019 JJ Giltinan Championship on Sydney Harbour today.

With just two more races to be sailed in the championship over the weekend, Honda Marine has a net score of 10 points, and a discard of only 4 points, and holds a strong grip on the title.

Conditions were far from perfect as a light, shifting SE breeze, which faded a little over the day, made things difficult for all teams.

Honda Marine tightened the grip on the trophy in Race 7 when the team produced an unbelievable recovery to defeat ASCC by 17s, with the consistent Winning Group another 1m19s back in third place.

The day started well enough for the Australians as Asko Appliances held the lead over the first half of Race 6, but was unable to hold off the ASCC challenge when the two teams chose to go opposite ways (around Shark Island) to reach the top mark on lap two of the course.

There was a great (and welcomed) surprise in the latter race when Heinrich von Bayern’s German Marinepool team led the 25-boat fleet to the top mark with a 30s break over ASCC and Smeg.

Smeg was too fast downwind but the German team remained competitive to be in the top three to round the bottom mark.

The Smeg team went to the left of Shark Island on the beat back into the top mark in Rose Bay but the move didn’t pay off as the two New Zealand teams went to the right and grabbed the leading two spots, which they maintained on the run back to the finish.

It was an impressive day’s sailing by the kiwis, who proved far too good for their Australian opponents.

Racing continues on Saturday with Race 8 and concludes on Sunday afternoon when the blue ribbon will be presented to the championship winner after Race 9.

The club will have a spectator ferry following both days' racing, leaving Double Bay Public Wharf at 2pm. NOTE: THERE WILL BE TWO SPECTATOR FERRIES NEXT SUNDAY MARCH 10

For those who can't make it onto the water, live streaming is available on 18FootersTV: https://www.18footers.com.au/18-footers-sailing/18-footers-tv/. The live streaming coverage features pre-race interviews, which go to air at 2.15pm. The full race coverage of each race commences at 2.30pm, and it features a variety of 18ft Skiff greats as guest commentators. Saturday’s guest commentator is Adrienne Cahalan. A full replay of each race is also shown at the same address