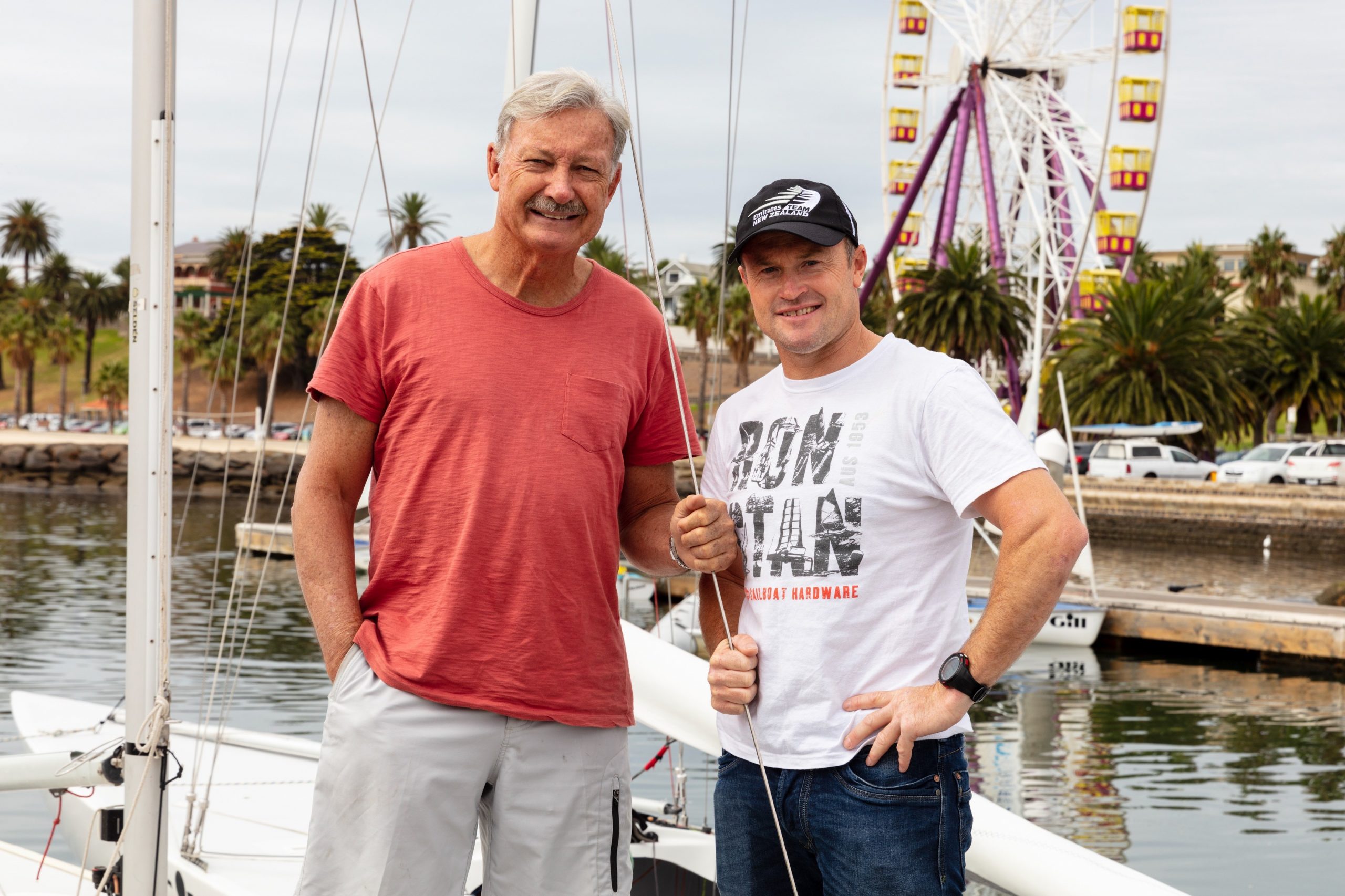 In what is possibly a world first, two winning America’s Cup skippers from different eras – John Bertrand and Glenn Ashby – will sail together to compete in the Victorian Etchells Championship from 9 to 11 March at Royal Geelong Yacht Club.

Hailing from Victoria, Bertrand and Ashby, both Olympic medallists, state and world champions, will compete on Bertrand’s Etchells Triad 2, joining a fleet of approximately 25 Etchells’ for the three day event.

Ashby and Bertrand headed out onto Corio Bay for a sail this morning, with teammate Billy Brown, ahead of the weekend’s racing.

“I haven’t been on the Etchells for about four years, or maybe even more, so it will be nice to go out for a couple of hours to work out where all of the ropes are again,” Ashby said.

“It will be a fun opportunity to sail together. The sailing is always fantastic here,” Ashby said of Corio Bay.

“It’s one of Australia’s hidden gems for racing for all different types of classes. It really is great sailing – I always enjoy my time here.

“I was here for the SuperFoiler Grand Prix last year and had a fantastic event there and we did well – previously I have done other events in Geelong as well.”

Meanwhile, around 25 of Victoria’s best sailors will compete in the Victorian 9er Championships, also being held over the weekend, in preparation for next year’s 49er/49er FX/Nacra 17 World Championships. The Worlds, from 8-15 February, is a key selection event for the 2020 Tokyo Olympics for many countries, and is also being held in Geelong.

The Laser Masters World Championship will also be held in Geelong next year during the 2020 Summer of Sailing and will take place from 19 to 28 March, 2020.

These events are expected to inject more than $6 million into the Victorian economy as competitors, support crew and spectators flock to Geelong and the surrounding region.

Ashby said it was, “an absolute feather in Geelong’s cap” to be hosting the world championships next year.

“The 49ers, 49er FX and Nacra 17 are going to be blessed with some fantastic sailing on Corio Bay.

“I think the reason why Geelong has been able to secure these events is because of the good work it has done in the past with other events, and particularly the sailing events. It’s a real credit to the community and the Club.”

Meanwhile, Bertrand said racing would be extremely intense on Corio Bay this long weekend: “It’s like an amphitheatre; a large part of the sailing venue is circled by land so it makes the racing really interesting.

“It’s going to be a terrific regatta with world-class competition. We will give it our best shot and have a lot of fun doing it.”

Bertrand and Ashby both said they were looking forward to sailing together for the first time.

“It’s something I have always wanted to do. Glenn’s been able to get away from his America’s Cup responsibilities in Auckland and come sail with me. I’m thrilled about that.”

RGYC Commodore, John Kint, said the RGYC was excited to be hosting a strong fleet for the Championships this weekend.

“To have two Victorian winning America’s Cup skippers, from different eras of this historic race, sailing on the same boat is pretty special.”

Looking ahead, the Commodore said “2020 would be “a massive year for the RGYC and for Geelong.

“RGYC is gaining a strong reputation for attracting major events to the Geelong region. We look forward to welcoming some of the best sailors from around the world to our waters and our wonderful city next year.”