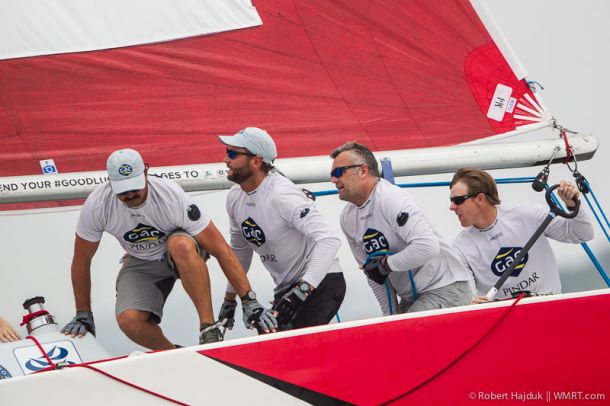 Johor Bahru, Malaysia (11th Feb 2015): Keith Swinton (AUS) struggled through sickness to notch up two wins and zero losses on day two of the Monsoon Cup Malaysia. The skipper of Team Alpari FX, along with bowman Ricky McGarvie, were struck down by a bug that saw them driven off to hospital after their matches were complete. Yet somehow they managed to keep their stuff together to score some vital victories over France’s Pierre-Antoine Morvan and fellow Western Australian, David Gilmour.

Swinton now sits on 6 wins and 2 losses, putting him in 4th place in Qualifying. Above him on the leaderboard are some of the usual suspects: Ian Williams, Taylor Canfield and Phil Robertson.

There’s a lot of pride and prize money at stake in this, the final event of the season on the Alpari World Match Racing Tour, so Swinton will be keen to get back into fighting form as soon as possible. Team Alpari FX trimmer Ted Hackney stood in for his stricken skipper at the post-race press conference. “Keith is very dehydrated, so we sent him off for some hydration assistance,” explained Hackney, who said they modified their approach to the racing to accommodate Swinton and McGarvie’s mystery illness.

“If anything we tried to make it more simple, took a bit of the load off Ricky, some of the layline stuff. Keith could pretty much function normally, but between the rest of us we tried to share the load a bit more. With the light conditions we had a bit more time to think. If it was a bit windier we probably wouldn't have fared so well.”

The easy assumption is that it’s a spot of food poisoning, and Hackney has been asked many times throughout the day which restaurant in Johor Bahru the team ate at last night. “Everyone has been asking us that so they can avoid it, so I've been trying to think of a really good restaurant that everyone can avoid,” Hackney joked. “But it wasn't like that. Keith and I went to one restaurant and Ricky went to a different one, and we've got one person sick from each group, so I'm not really sure what's going on. Maybe a virus or something.”

The wind was a bit lighter for the second day of Qualifying, but even with the fickle conditions and shifts up to 30 degrees, principal race officer Dave Tallis breezed through six flights. With only the top eight of the 12 teams set to go through to the Quarter Finals, some of the lower-order crews need a very good day on Thursday when the final five Qualifying flights are scheduled.

At the top of the leaderboard it’s business as usual for the two leading contenders for this year’s world title, Ian Williams and Taylor Canfield both displaying their devastatingly consistent ability to win matches even from tough situations.

One of the most exciting battles came right at the end of the day, between Williams and one of his old rivals, Mathieu Richard from France. “It was a classic Williams-Richard match of the kind we’ve been doing for the past 17 or 18 years,” said the GAC Pindar skipper.

The key moment, all captured on the live broadcast, came at the windward mark when the British and French crews went into a long slow dial-up, with jibs dropped to the deck. “The current did us a favour,” said Williams, “taking us into the two boatlength zone. Then Mathieu tacked where he shouldn’t have done and he got a penalty. I don’t know why he didn’t get a double-penalty, but anyway, we managed to overtake him at the finish and we’re pleased with that win. Pleased with all three wins today because they were all close matches, really sharpening us up before the Quarter Finals.”

Taylor Canfield had a heart-stopping moment when his spinnaker came uncleated and dropped to the water. “The boys did a good job of catching it and re-hoisting before it went under the bow, so it didn’t hurt us too much,” said the US One skipper, who is the only one to have kept a perfect score so far, sitting on a win:loss of 7:0. Williams sits on 8:1, having dropped a match on day one to Robertson, who always looks comfortable at the Monsoon Cup, even with the change of venue to Johor Bahru for the first time. “We always enjoy sailing the Foundation 36 boats,” said the WAKA Racing skipper. “The crew is all over it. The boys just commented that it’s like riding a bike, even when you haven’t sailed these boats for a while.”

The skippers sitting on the cusp of scraping into the Quarters, or heading home for an early bath, are Pierre-Antoine Morvan, Bjorn Hansen, David Gilmour, Eric Monnin and Johnie Berntsson. Hansen often finds himself on the borderline but has an uncanny habit of doing just enough to get through, and then finds a new lease of life in the knock-out stages. The Swede will be hoping that’s the case tomorrow.

For the two local teams, skippered by Malaysia’s Jeremy Koo and Singapore’s Maxi Soh, there is no prospect of advancing beyond Qualifying. In their local derby match, Soh got the better of Koo in the pre-start and went on to take his first point of the Monsoon Cup. The racing area takes place right on the border of Malaysian/ Singaporean waters, and Soh joked that he had the home advantage of starting the match on the southern side in his home patch.

Koo has yet to get a win, and was docked half a point after being judged to have caused damage in a pre-start incident with Richard that led to a nasty T-bone crash. However, his score belies some close contests that could have gone very differently for Malaysia’s top match racer. He lost to Hansen by just 7 seconds, and led much of the Richard match until an error at the leeward gate. “We should have tacked as soon as we had gone round, and put a closer cover on Richard,” Koo admitted. “That might have been the difference in that match, but still we are improving and getting better day by day. It’s always a great learning experience at the Monsoon Cup.”

Qualifying continues at 1000 local time (UTC +8) on Thursday and can be watched live via the Tour’s Livestream page https://new.livestream.com/WorldMRT/mcm-15-qr3

Results of Qualifying after Flight 12