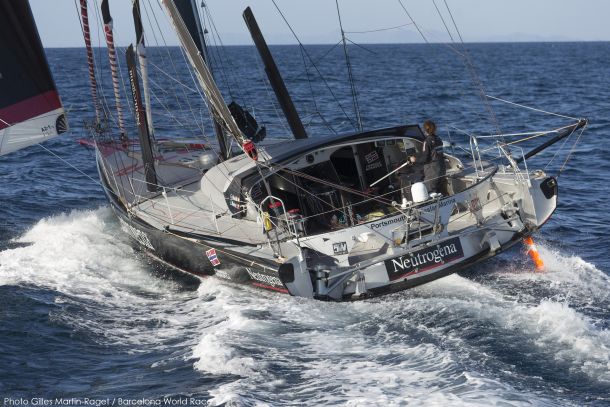 After suffering an engine problem which affects their ability to generate electrical power, Guillermo Altadill (ESP) and Jose Munoz (CHI), who are racing in second place in the Barcelona World Race around the world,  have taken the decision to reroute to the south of New Zealand to make a technical repair.

Altadill notified Race Direction at 0220hrs UTC this Wednesday morning of their decision, saying: ” We have a problem in the main engine, and we cannot charge batteries, we are sailing to the South of NZ island to get spare parts and get back in the race again at 100%.”

The Spanish-Chilean duo altered course to the NE around 0300hrs UTC this morning and had 585 miles to sail to Invercargill in the south of New Zealand's South Island. Altadill reckoned their ETA in Invercargill would be in about 40 hours.

Neutrogena is sailing in about 25kts of NW'ly breeze which is due to increase to 30kts with big seas. They are in regular contact with their shore team in England and with Race Direction which are tracking their progress closely.

Race rules require that any technical pit stop is a minimum of 24 hours duration and maximum eight days. After more than 40 days racing this is the first technical pit stop of the eight boat IMOCA 60 fleet which started from Barcelona on 31st January 2014.

“We dont have the battery system charging at all and so just now we are using the hydro generators just to maintain the battery system and to make water and to keep the electronics on. The only problem now is that the conditions are getting worse and worse, with a big sea state, and more wind. So we cannot use the hydros. So we have to economise for the next 40 hours. We have to hand steer and not use the electronics. We have made enough water to get to the south of New Zealand.

“We are in contact with the shore team of 5 West in England. This morning they are meeting and probably will send a couple of guys and some people from NZ to come and help.

“This happens in a marathon race like this one. It is part of the game, one of the things you have to face up to. We are disappointed because we were trying to fight all the time for the last 40 days, to be at the front. We were in a good position waiting for our options and now we have to lose quite a lot miles. But the race is still long. We go there, we keep things together and keep racing. Who knows? If it happens to us it can happen to others.”