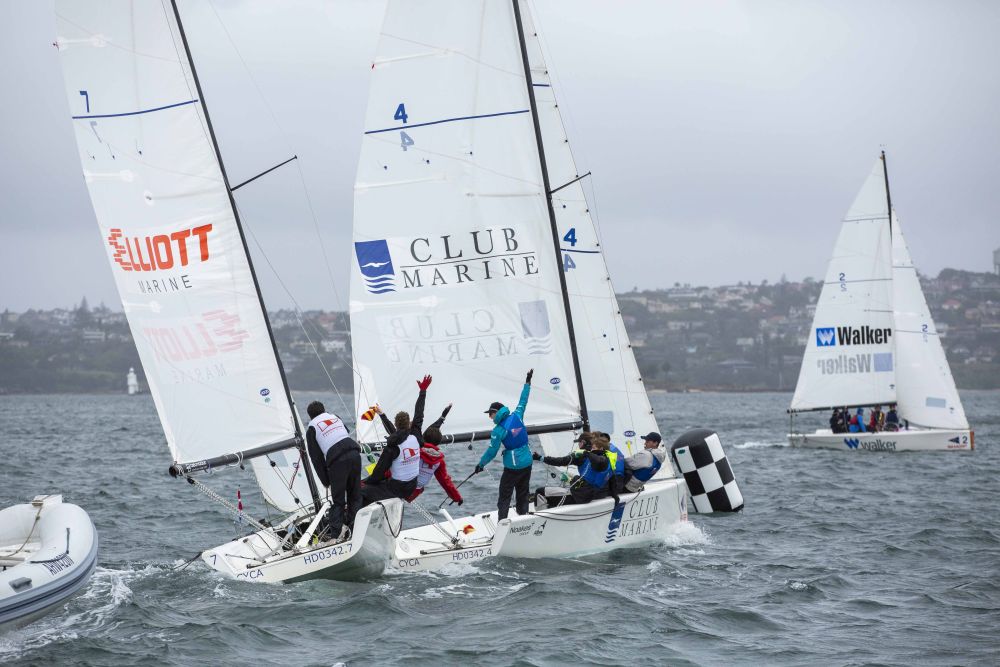 The solid breeze made for some action-packed prestarts on day 2. CREDIT - Hamish Hardy CYCA.

Two teams have been confirmed for the semi-finals of the 2018 Sharp Australian Youth Match Racing Championship with last year’s two finalists, defending champion, Tom Grimes (CYCA) and current regatta leader James Hodgson (CYCA), both securing enough points for the next round which is due to commence tomorrow afternoon.

On a wet and windy Sydney day, the 10 teams from five states took to the water on time with the race committee managing to complete the two final flights for Round Robin 1 in a strong 20 knot Southerly breeze. Overnight leaders, Finn Tapper, had a tough finish to his round robin, losing both his final two races against fellow CYCA teams to eventually finish the round in third place.

After a 2-hour delay over lunch as Sydney was hit by a thunderstorm, teams took to the waters once again with four flights of the second-round robin completed in varying conditions ranging from 8-22 knots with wind shifts of up to 30 degrees.

James Hodgson, also representing the CYCA, continued his dominant display on-board the Elliott 7s as he and his team of Ryan Wilmot, Harry Hall & Charlie Gundy held onto their unbeaten record by the days end. The team now sits clear ahead of the chasing pack on 13 points and have booked themselves into the next round.

This week’s highest ranked team skippered by Tom Grimes have climbed into second place, one point further back on 12 points, having only lost one race to Hodgson in the previous days competition. Whilst the three leading teams are now all on double digit points, the fight for the remaining semi-final berth will be fiercely contested tomorrow with two teams fighting hard, whilst a further 3 teams still mathematically could make the cut.

Currently the Royal Prince Alfred Yacht Club’s Niall Powers sits in fourth place on seven points with Newcastle Cruising Yacht Club’s Thomas Steenson one point further back on six points. Both teams have now raced each other twice, with both teams having won a race each. The remaining five flights will be a strong test for both teams with matches against the top three still to come.

Darwin’s Jed Cruickshank and Royal Sydney Yacht Squadron’s Charlotte Griffin are also in with a chance to spoil the party although will need to post an almost perfect day.

Tomorrow racing will continue at 1000hrs with the intention to complete the remaining flights of the Round Robin.