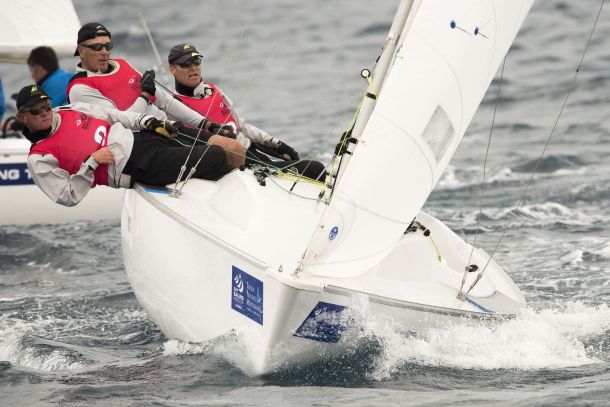 The Australian Sailing Team won two silver medals in the Sonar and the 2.4mR on the final day of Paralympic racing at the ISAF Sailing World Cup in Hyères, France on Saturday, 25 April.

The Sonar competition stirred up several ups and downs throughout the week resulting in a final race showdown in the 18-boat fleet.

After winning the first race they were only one point behind the leading French and it was a winner take all scenario for the final race of the regatta. The Australians had the advantage at the first mark, leading the French and German teams but the French battled their way back with Australia finishing the race behind them in fourth.

A first and a fourth place meant silver for Australia with the Germans taking bronze.

“Today we got a win in the first race, and a fourth in the second race. The fourth in the second race was so close, everyone going over the line could have touched each other. The fourth place put us into silver medal position, which is great news for us because the last few regattas we’ve only ever got bronzes. So we’ve got rid of the bronze curse,” Jonathan Harris said.

About the overall event he added, “The regatta overall has been fantastic, the racing has been very close and competitive. We’re really looking forward to going to the next regatta and consolidating what we’ve done today.”

It was a big day on the water for Australian Sailing Team’s Paralympian Matt Bugg in the 2.4mR. He went into the final race day ranked seventh and put in a strong fight recording a second and first which catapulted him up into the silver medal position.

“I had a great day today, I started the day in seventh thinking if I sail really well I can jump up in to third, but to come away with a silver medal after having a second and a first, I’m absolutely stoked,” a happy Matt Bugg said after racing.

“We’ve had a really good fleet and all the best guys in the world were here racing. It’s been really good training for me, because it’s a similar size fleet to what the Paralympics will be next year and with the same sailors,” he added.

It was the first time Paralympian Matt Bugg competed in Hyères and his best European regatta so far.

“It was a beautiful day here in Hyère and we’ve been really lucky with the weather.  We’ve mainly had sunshine and perfect sailing conditions. I’ve been absolutely loving it and I’m pretty keen to come back next year.”

The Australian Paralympic team boats will continue to the Netherlands to compete at the Delta Lloyd Regatta 26- 30 May 2015. In the Netherlands Paralympic gold medallists in the Skud-18 Daniel Fitzgibbon (NSW) and Liesl Tesch (NSW) as well as Australian Sailing Squad’s crew of Amy Barnbrook and Brett Pearce will join them.

The next ISAF Sailing World Cup regatta in Weymouth and Portland, Great Britain will feature the 2.4mR, SKUD18 and Sonar with racing commencing on 10 June. For many of the athletes it will mark a return to the venue of the London 2012 Paralympic Sailing Competition.