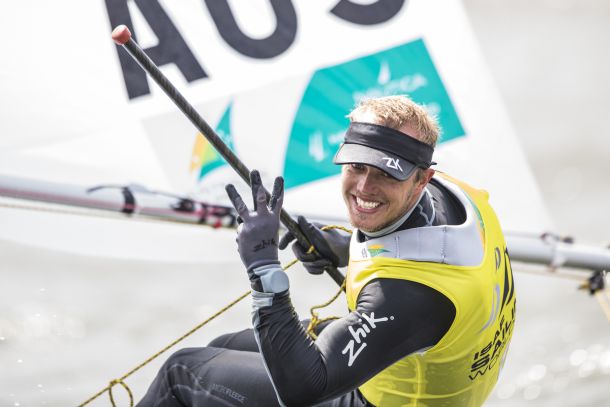 Olympic gold medallists Nathan Outteridge (NSW) and Iain Jensen (NSW) added a silver medal in the 49er, which they had already secured on Saturday with one day to spare. Australia’s second crew in the top-ten medal race, David Gilmour (WA) and Rhys Mara (VIC), just missed out on bronze after a capsize put them back into fourth overall.

This brought the total Australian medal tally to one gold, two silver in the Olympic classes at the first European World Cup of the 2015 series.

In a strong breeze of 15-20 knots selected races were broadcast live. Click here for a full replay.

The Australian Sailing Team was competing in full force at the ISAF Sailing World Cup Hyères with this Olympic and Paralympic class regatta being the first major event on the road to Rio 2016 selection. The top 40 boats of the world's best competed in each of the ten Olympic class events in Hyères after changes to the ISAF Sailing World Cup format and pre-qualification based on the ISAF World Sailing Rankings and a qualification regatta.

Laser World #1 Tom Burton took over the yellow leader’s jersey on day two of the regatta and never let it go.

Tension was rising on the final day of fleet racing when he lost a few points in a heated battle with Croatian Tonci Stipanović in race two of the day, which first saw him slip into third.

But following an overnight protest, Burton was awarded points in a redress to start the medal race in the lead with just two separating him from Nick Thompson of Great Britain. And in the final race of the event he never left any doubt about wanting to make it a hat trick at Hyères regatta.

“Today was a bit different than the last few days, bit windier and some nice big waves. We had some tight close racing and a bit of fun as well,” Tom Burton said about the racing.

It was the third time in a row Burton won the ISAF Sailing World Cup Hyères, which made the win extra special.

“This was my hat-trick here in Hyères, three years in a row so this win is pretty special. I sailed quite well all week, but some things didn’t really go my way. So it was just nice to finish it all off on an up, sail well and get the job done.”

About the plans ahead he added “I’ll have a bit of time off now after we’ve had a block of two big events in Palma and Hyères, with the priority being this event. I’m off to Garda, which is a very nice place to be, and I like to spend time there when I’m not fully competing and do a bit of preparation for the next World Cup in Weymouth (8-15 June). I will use the time to work on a few things, do a bit of recovery and hit Weymouth hard.”

World Champions and World #1 in the Men’s 470 Mat Belcher (QLD) and Will Ryan (QLD) went into medal race in third place, after a slow start to the event and consistently working their way up throughout the week.

In the Medal Race they rounded the first mark in pole position, held their lead throughout the race and went on to claim the Medal Race victory which handed them silver.

“We were a bit rusty as we came into things, but as the week progressed we improved. We are happy with the way we sailed in the medal race and it’s nice to come away with the best result we could on this particular day,” Will Ryan said after racing.

“This was our first event for this year’s European season and we’ve got quite a long season coming up ahead of us, as our Worlds are not until October. We had a bit of a break over Australian summer to have the chance just to focus on a few different areas, while we were at home. Now we are looking forward to put that back into our racing style.”

“I’m sure some of our friends and followers might be a bit surprised to not see us at the top of the podium. There’s that expectation that goes with it, but that’s we want our competitors to expect as well. This week they might say we sailed badly but we came away with a second, so we can’t complain too much about that. Ultimately, we want to be at the top. There’s nowhere else we’d prefer to be,” Will Ryan added about the expectations around their success over the last events ever since teaming up together.

Gold and silver were already wrapped up in advance of the Medal Race with Nathan Outteridge and Iain Jensen winning silver and World Champions Peter Burling and Blair Tuke (NZL) gold.

This was the first European and first World Cup regatta this year together for the pair after Nathan Outteridge missed the World Cup in Miami in January.

It was a bit of an up and down week, but given the fact that it was the kick-off to their European Olympic 49er season and their first time racing in the new ISAF Sailing World Cup format, they were quite satisfied with where they are at as Nathan Outteridge explained:

“We had a bit of tough week with some incidents on a windy day, tight racing in the 40-boat fleet and we are still getting our heads around racing with 40 instead of 25. But all in all we are happy and had a good lead over third place overall and for us that’s a good thing.

“We’ll really have to have a look at how we race the bigger fleets, instead of the Olympic-size fleets of 20 boats, but we’re looking forward towards Weymouth, which will be another 40-boats regatta.”

With regards to their archrivals from New Zealand he added: “Pete and Blair sailed really well this week. We made some good improvements from last year and we have a few more events this year in the lead up to our World Championships in November, so this is a process of improving and slowly grinding them down.”

Together with Outteridge and Jensen in the Medal Race were Australian Sailing Team’s David Gilmour (WA) and Rhys Mara (VIC) who went into the race ranked third. With only eight points separating them from Germany in fourth.

They were in control for the first 50% of the race. However, on the second downwind disaster struck for Gilmour and Mara as they capsized and lost their third position. As a consequence they dropped down the pack and came through in ninth. The Germans capitalised on the Australians misfortune, coming through in fourth to steal bronze.

Despite this misfortunate Nathan Outteridge was full of compliments for his up-and-coming training partners:

“We had four teams in this top 40 event and two crews in the top three going into medal race. It’s great to see the Aussie squad getting stronger all the time and we are far from being complacent that the Olympic spot is ours. We know, the better our team mates get the harder we have to work to get that spot and the higher the chance will be to get a gold medal.”

The Women’s skiff – 49erFX was the final race of the day and the wind had picked-up to 18-20 knots by race time. Big breeze and big waves tested the 49erFX sailors in a testing race.

Olivia Price and Eliza Solly qualified for the final top-ten medal race in seventh and had continuously moved up the ranks throughout the week. In the challenging conditions, a capsize in the first part of the race did not let them climb the results ladder any further.

The crew showed a strong progression throughout the event and will go back to Australia next for a training block at home before competing at the World Cup in Weymouth in June.

The gold medal was already decided ahead of the final race, but a medal was still possible for both Australian crews in the race with points being tight.

Darren Bundock and Nina Curtis went into the final race in sixth and finished overall fourth, winning this internal round over Jason Waterhouse and Lisa Darmanin, who finished overall seventh.

“We went into the race in sixth and managed to climb into fourth overall, but we did the damage earlier in the regatta and there was a bit too much of a gap to jump up into the medal ranks. But we’re really happy that we progressed throughout the regatta,” Nina Curtis said.

And Darren Bundock added: “Mathematically we could have made into silver or bronze position today, but the stars didn’t align for all the other boats to finish in the correct places to make this happen.”

We will head to the Delta Lloyd regatta in the Netherlands next and use it as a warm-up regatta for the World Cup in Weymouth in June and that again will be a bit of a lead-up event for our World Championships in Denmark July. We have series of events that are important for Olympic selection. With three Australian Nacra crews in contention, no-one on our team has jumped through the hoops yet, so there will be a bit of pressure for the next events,” Nina Curtis said about the plans ahead.

Jason Waterhouse and Lisa Darmanin started the week in the lead and had been amongst the leaders throughout the week, before they dropped down the ranks at the end of the regatta to finish in overall seventh.

“We started the week really well and were really happy to mix it with the best and show that we are here and ready to go. We had a few errors throughout the end of the regatta, making a few tactical mistakes, but overall we are happy with how we are sailing and how we are progressing. It’s a long way to Rio and we aim to not make the same mistakes at the next regatta,” Lisa Darmanin said at the event of racing and the tasks ahead.

Teams will be heading different ways, with some competing at Garda (6-10 May) as well as at the Delta Lloyd Regatta in the Netherlands (26-30 May). The whole team will compete again at the ISAF Sailing World Cup in Weymouth from 8-14 June 2015.