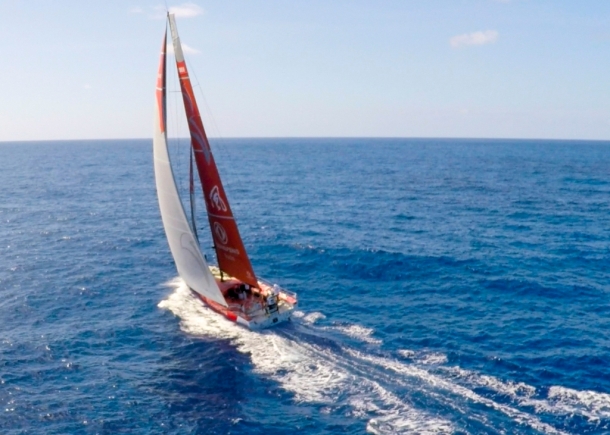 Dongfeng Race Team (Charles Caudrelier/FRA), fully recovered from the trauma of breaking their mast on the last leg, narrowly led the chase to Newport, Rhode Island, USA, on Monday.

There was no room for the slightest complacency on the Chinese boat, with MAPFRE (Xabi Fernández/ESP) hot on their heels just 4.6 nautical miles (nm) astern, and Team Brunel (Bouwe Bekking/NED) a further two nautical miles behind.

Even Team Alvimedica (Charlie Enright/USA), so determined to win the 5,010nm stage from Itajaí, Brazil, to their home port of Newport, were far from out of contention.

Although in last place of the six boats, they were only 23.3 miles adrift of the leaders. Team SCA (Sam Davies/GBR) and overall race leaders, Abu Dhabi Ocean Racing (Ian Walker/GBR), were also handily positioned, 19.5nm and 19.7nm respectively behind Dongfeng Race Team.

For Caudrelier the tension only continues to grow. After surprising most by sharing the points lead with the Emirati boat after four legs, they were forced to limp to Argentina and safety after fracturing the top of their mast 200nm from Cape Horn during Leg 5.

There was no option, but to replace their rig with only a couple of days to spare before the Team Vestas Wind Itajaí In-Port Race and the Chinese team’s skipper was concerned that the rig had not been fully tuned before starting Leg 6 on April 19.

If he were worried that Dongfeng would have lost the boat speed that posed such a threat to their competitors earlier in the race, then so far those fears have proved groundless.

Francisco Vignale, Onboard Reporter for MAPFRE, was trying to work out at the weekend how Caudrelier’s crew were extracting such pace from their identical, one-design Volvo Ocean 65.

“Dongfeng is sailing so fast that the team have been taking around half mile on each watch (every four hours),” he wrote. “All of this is a bit desperate and frustrating since we do not know why and how they always have that extra speed. Is it the mast? Do they have a new mainsail?”

Caudrelier sounded like a man who would love to know the secret himself. In a recent blog from his boat he wrote: “The wind is very light and unstable and each of the boats has good and bad phases. It’s hard on the nerves, no gain is ever for keeps.

“This Volvo Ocean Race is really something else. The move to a one-design boat has changed the race and made it even tougher. The permanent contact with our competitors is tiring and stressful.”

The fleet is expected to reach Newport from May 6-8 after around 17-19 days of sailing from Brazil through the Atlantic.

Over the next few days, they are likely to be pushed along by a two-knot current behind them, giving the entire fleet an ‘escalator’ effect.

After this leg, they have three more stages to negotiate, finally completing the 38,739nm, nine-month offshore marathon in the last week of June in Gothenburg, Sweden.