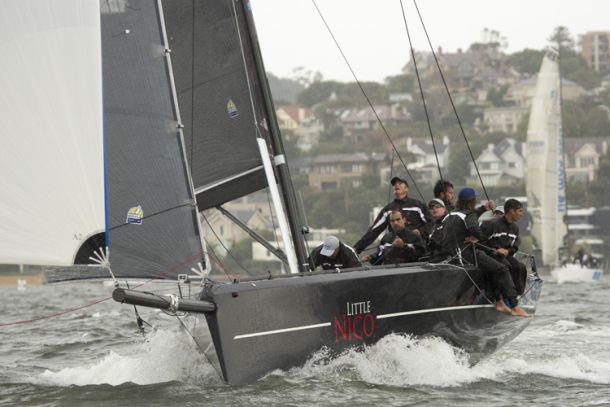 Rugged up on the new ' Little Nico'. Photo David Brogan

Nearly 100 diehard owners and their crews ignored the unfriendly conditions in the first pointscore race of the Land Rover Winter Series sailed on Sydney Harbour today; a cold, slow water torture is the best way to describe the gusty and rainy gloomy day competitors faced.

Early this morning, many competitors sat eating breakfast at the Cruising Yacht Club of Australia, bemoaning what was to come. But at least it was a vast improvement on yesterday afternoon’s weather when freezing cold hailstones and torrential rain rocked most of Sydney, leaving it looking like a ski field.

Two of those early ashore were Geoff and Pip Lavis who took out Division A1 from Darryl Hodgkinson’s Victoire and Damien Parkes’ Duende.

“It was really wet and cold, but the racing was good. It was an interesting start to the Land Rover Winter Series – 12 knots one minute gusting to 25 the next, maybe we’ve got the hardest one out of the way early,” Lavis said.

“It was nice to get a win up, but like most people today, we had a few hiccups. We got around the course cleanly in the end, but we shredded a kite earlier. There was a bit of carnage on the course; it was a day to make sailmakers smile – Broady (Ian Broad, Hood Sails) will hopefully be able to repair ours,” Lavis, a past commodore of the CYCA, said.

Warwick Sherman (Occasional Coarse Language Too) got out of bed and rugged up after two weeks with a near-bout of pneumonia to pip Les Goodridge’s Wax Lyrical to the post in Division A2; just 25 seconds split the two.

“I really wanted to race, but still not 100 percent, I came straight home after to warm up with a shower. Then I discovered we’d won, so I’m pretty happy,” said Sherman.

Sherman, who is in remission from cancer, is in the process of raising money for the Snowdome Foundation. He has already donated $10,000 through his yacht’s sponsor, Concierge Business Travel, in the fight to ‘make hope real’ for blood cancer patients.

“We’re building our crew up for the season ahead, and I had two new guys aboard today. All went well, no damage, because I told the guys I wanted to sail conservatively,” the CYCA member ended.

In Division J1, Kevin Whelan was happy not just to win with his Beneteau 45 F5 Reve, but because, “We finished the race and arrived back at the CYCA with all our crew and nobody lost any fingers!”

“The day started off pretty ordinary and got worse from there! It was raining when we headed out and then the wind picked up. We were lucky not to do any damage – Reve is a comfortable cruiser that weighs 14 tons, so she was perfect for today’s race.”

While others were struggling to get their yachts around the course in the big fleet, Whelan said his crew enjoyed a hot lunch.

“Despite the weather, or maybe because of it, we enjoyed hot roast chicken drumsticks. They kept our spirits up,” he said after beating L’Attitude, (Jon Short/Rob Hunt/Miles Bastick) to the punch by a mere 14 seconds.

Principal Race Officer Denis Thompson gave his view from the start boat. “Winter is here. It was a cold, wet, windy day. The breeze was west, going south-west throughout the race. It was pretty gusty; the biggest we saw was around 18-20 knots. It mostly averaged around 15 knots,” he said.

“It was pretty puffy, making it a hard day’s sail and we heard a bit of shouting when the boats were gybing around marks. I heard rumours there is a bit of damage in the fleet too – it was that sort of day. I think it was a good start to winter and at least a watery sun came out as competitors got back to the Club.”

Weekly prizes are awarded to first, second and third placegetters in each division and include exclusive CYCA Land Rover Winter Series merchandise. One lucky division winner each week is drawn to receive a Land Rover Range Rover Evoque experience for a week.

In addition, the Noakes Group is providing a lift stand launch and two free laydays for one lucky division winner each week. Noakes’ Sean Langman has three N26’s entered in Division G of the Series and will enjoy a race within a race each week.

This week, Larki Missiris (Buildrite/G&R Isuzu) was the lucky winner of the Land Rover experience. Missiris, who won Division B this week, is on a winning streak. In early March he was drawn to win a return trip for two to New Zealand for a six-night luxurious cruise around the Bay of Islands after winning PHS Division 1 at the Sydney Harbour Regatta.

Robert Carr/Stephanie Cook/Kerry Burke (Mortgage Choice Rumba) won Division D and were the lucky ones drawn for the Noakes Group prize, which will come in handy with a long season of racing ahead.

Next Sunday competitors will sail Race 2 of the Land Rover Winter Series and will be hoping for more convivial conditions.