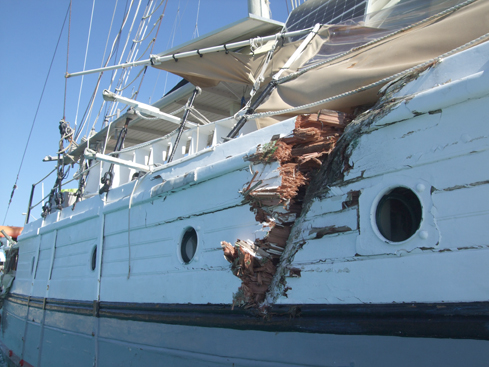 The BVI Beacon. By Todd Vansickle.

Police are confirming that a collision occurred between the St. Thomas charter boat Talofa and a barge based out of Virgin Gorda early Thursday morning in St. Thomas Bay, VG.

No one was reported injured in the incident, but the 97-foot sailing ship did sustain major damage to its wooden hull, a solar panel and one of its masts. The boat took on about two feet of water and had to be assisted by Husky Salvage & Towing.

According to police, Talofa was moored and had six passengers and three crewmembers onboard at the time of the incident. The boat is currently at the ferry dock at St. Thomas Bay. Its passengers cut their visit short by two days and boarded an afternoon ferry to Tortola.

“I can safely say no one was injured,” said Talofa Captain Wilson Bryan. “It is a sturdy ship.”

The captain was waiting on the BVI Ports Authority to clear him to sail back to St. Thomas, where he planned to have the ship repaired.

Police, who did not identify the barge, are currently investigating the cause of the collision, according to Diane Drayton.