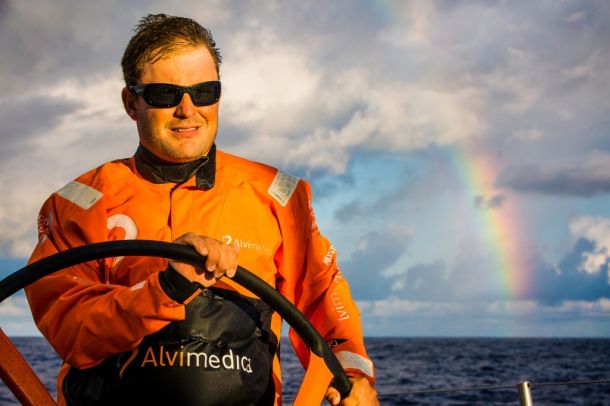 ALICANTE, Spain, April 24 – American Team Alvimedica (Charlie Enright/USA), who are dreaming of winning the Volvo Ocean Race’s sixth leg to their home port of Newport, Rhode Island, USA, snatched a narrow lead on Friday. The 5,010-nautical mile (nm) stage from Itajaí, Brazil, to Newport could not be more finely balanced as, once again, the six boats are incredibly closely matched in the Atlantic as they headed from South to North America.

After leaving a windless Itajaí on Sunday, overall race leaders Abu Dhabi Ocean Racing (Ian Walker/GBR), have had their noses narrowly in front for a large part, but the rest of the fleet have been no more than 10nm adrift for much of that time. With some squally conditions and shifting winds as the boats progressed away from the Brazilian coast, the fleet finally showed some sign of separation – but it is still anyone’s leg to win, with more than 4,000nm to sail.

Enright’s crew overtook the Emirati boat early on Friday (0940 UTC) and claimed a slim lead of 8nm with Chinese challengers Dongfeng Race Team (Charles Caudrelier/FRA) some 3.5nm further behind. Team SCA (Sam Davies/GBR), who had concerns about their key fractional code zero (FRO) sail before the leg and then broke a winch, threatened briefly to take the lead themselves on Thursday before falling back.

Onboard reporter Corinna Halloran (USA) explained that there was plenty of work to be done after the team discovered their portside runner winch housing had cracked. “We are currently fixing the cracked winch. However, the repair will not be ideal and still might cause trouble,” she wrote in a daily blog from the boat.

“The odds of that happening are pretty much a billion to one,” added British crew member Abby Ehler. That particular winch takes up to 10 tonnes of load as the runner helps to hold up the rig.

The women’s boat, however, was still very well placed in fourth with Team Brunel (Bouwe Bekking/NED) to their their stern, and MAPFRE (Xabi Fernández/ESP) currently bringing up the rear, 14.5nm behind the leaders.

The latest projections are that the fleet will arrive in Newport between May 6-8 after 17-19 days of sailing.

Abu Dhabi Ocean moved seven points clear at the top after winning Leg 5, but there are still just under half of the overall points up for grabs with four stages, including the current one, to race before the climax in Gothenburg in the last week of June.