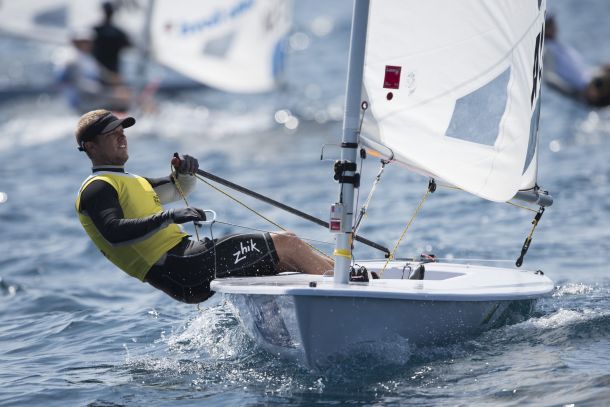 In a light and shifty breeze of three to eight knots, Olympic gold medallists Nathan Outteridge (NSW) and Iain Jensen (NSW) posted one race win in the day’s three races and hold onto third. Australian Sailing Team’s David Gilmour (WA) and Rhys Mara (VIC) also moved up into the top ten and sit in eighth with three more races scheduled for the final day of fleet racing on Saturday, 25 April.

World Champions in the Men’s 470 Mat Belcher (QLD) and Will Ryan (QLD) move up one spot into sixth and have two more races scheduled on Saturday.

The wind continued to die in the afternoon and resulted in only one race for the Nacra 17 and two for the 49er FX.  In the Nacra 17, Darren Bundock (NSW) and Nina Curtis (NSW) had their best race of the regatta so far and with a second place moved up into the top ten finishing the day in ninth. Jason Waterhouse (NSW) and Lisa Darmanin (NSW) posted a ninth, which put them back into fifth overall.

The racing will be live broadcast on the International Sailing Federation (ISAF) website www.sailing.org.

Tom Burton will carry the yellow leader’s jersey into the final day of the 40-boat fleet racing. An eleventh and fifth place was enough to defend his first place in the Laser after three days of racing. He sits five points clear of Croatian Tonci Stipanović.

“The day was alright. We had pretty flat water and just around five knots and to get through a light day without any dramas is a good sign,” Tom Burton said after racing. “I picked the wrong side in the first race, went 20th around the top mark and made it up into eleventh, which was a positive and a good indication of my boat speed. In the second race the wind died a bit but I managed a fifth place to defend my first place, which is good.”

Burton leads on 23 points followed by Stipanovic on 28. Nicholas Heiner (NED) is in contention in third on 32 points.

Australian Sailing Team’s Matt Wearn (WA) struggled in the light conditions and dropped back into 17th. But the 19-year old stayed positive keeping the bigger picture in mind:

“It’s good for me to get more light wind situations in at regattas as so far we haven’t had so many light events yet and it’s definitely something I need to work on,” he said. “But even though I had a pretty bad day, the bigger picture is looking pretty good and it’s all about practicing more and getting more experience and hopefully the next races will be a bit better,” he added.

Nathan Outteridge and Iain Jensen won the second race of the day on Friday, which together with a 17th and eleventh place meant they held on to third place.

Australian Sailing Team’s David Gilmour (WA) and Rhys Mara (VIC) continued to work their way up the fleet and finished the day in eighth.

“We had three races in pretty light breeze and we managed three places around ten. That’s okay in this level of fleet and we had no blowout races, which is good for us. There were a few things we could have done better, but all in all it was okay. We went up the ranks a bit, but we still can’t have any blowouts on Saturday, as it will still be difficult to get into the medal race (top 10),” David Gilmour said.

“It’s the first regatta in Europe and there are still many things we need to work on, but we’ve already improved throughout the regatta. We also got some new things to work on, but it’s all been promising moving forward.”

Joel Turner (QLD) and crew Lewis Brake (QLD) dropped into 26th, while new combination of Will Phillips (VIC) and James Wierzbowski (VIC) sit in 37th at their second regatta together.

Olympic dual medallist Darren Bundock and Olympic medallist Nina Curtis had an average regatta over the first couple days, but put in their best race thus far and finished second on Friday.

Unfortunately it remained the one and only race of the day after the breeze died down in the early evening.

“We had a much better day on the water today and came away with a second, which brought us up the scoreboard a bit. First, we didn’t really know what we got as it was really close at the finish. We wanted the race win today and were sailing really well in the very light conditions out there. It was actually quite Rio like with the shifts out there so we really enjoyed it,” Nina Curtis said about the day.