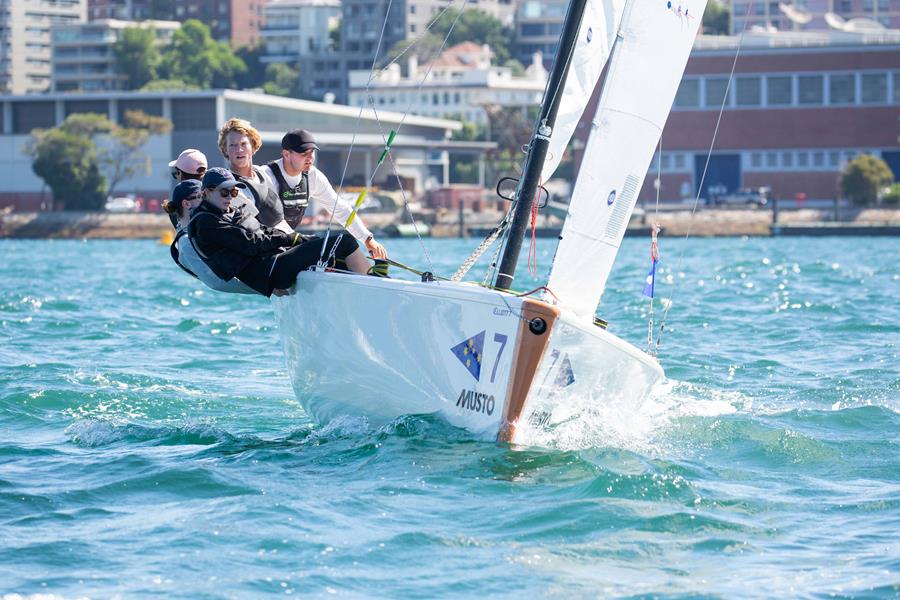 Matt Whitfield (GBR) was able to secure his spot in the semi final with three straight wins on Day 3 of racing. Credit - CYCA/Hamish Hardy.

Two semi-finalists have been decided on Day 3 of the Musto International Youth Match Racing Regatta as Matthew Whitfield delivered a knockout blow to defending champion Frankie Dair in today’s Quarter-Finals, scoring 3-0, to book his berth in tomorrow’s semi-finals. Whitfield is currently joined by Jordan Stevenson, who also went 3-0 over Australia’s Finn Tapper.

Before heading into the Quarter-Finals though, the Race Committee had a small task of not only finishing off the round-robin qualifying stage but also the eight-team repechage stage. All in all, 43 races were completed, with six of the 12 teams now knocked out of contention for this year’s ‘Joy Ride’ Perpetual Trophy.

It was another postcard sailing day on Sydney Harbour with 8-18 knots blowing from the north-east. There were early upsets from the beginning of the day. The final flight of the round-robin saw Cruising Yacht Club of Australia’s (CYCA) James Hodgson snag the final Top 4 spot when Frankie Dair losing to David Wood and Hodgson beating Tapper.

Stage 2 of the regatta saw Grimes, the current Youth Match Racing World Champion, dominate the proceedings, topping the round with a 6-1 scorecard. Cricket Racing’s Jeffrey Petersen, representing Balboa Yacht Club, also seemed to benefit from more time in the Elliott 7m, improving throughout the day to score 5-2, along with fellow American Frankie Dair.

CYCA’s Finn Tapper was the final skipper to qualify for the quarter-finals, with a 4-3 scorecard. At the end of Stage 2, four competitors were knocked out with Niall Powers climbing from 12th to 9th in the repechage, David Wood finished in 10th, Niall Malone in 11th, and after an impressive qualifying stage which saw him initially qualify in 7th, Jed Cruickshank unfortunately slipped to 12th.

Moving into the quarter-finals, there was an upset from the start with Jeffrey Petersen dominating Nick Egnot-Johnson in the opening race. Petersen looked set to record a second victory over the World #2 when he again penalised him in the pre-start and led down the first run. A poor tactical decision at the gate saw Egnot-Johnson wipe his penalty and take the lead to level the series. Egnot-Johnson then took a comfortable victory in Race 3 to now lead the series 2-1 heading into the final day.

In the other quarter-final, it is once again the two inseparable competitors and ex-teammates ,James Hodgson and Tom Grimes matching up against each other. The World Champions were never more than a few lengths away from each other during the entire series.

It was inevitable that it would be tight racing between these two and they didn’t disappoint. Hodgson got the early jump in Race 1, whilst Grimes came from behind to take out Race 2 by only 1 second. Race 3 then got extremely aggressive between the two with Grimes having contact with Hodgson around the bottom gate, resulting in significant damage to Hodgson’s boat. However, Grimes managed to overtake and extend from Hodgson to complete his penalty turn and take the series lead. Back at the CYCA though, Grimes was found in breach of heavy contact and was award a 0.75pt penalty for the collision.

Friday is the final day of the event, where a new champion of the “Joy Ride” trophy will be crowned. The Quarter Finals will commence at 1100hrs Sydney time, with the semi-finals scheduled for 1230hrs and the Finals at 1500hrs.