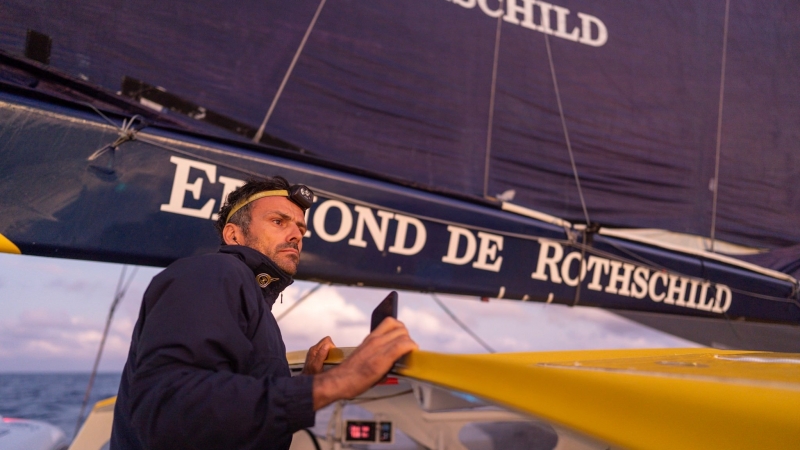 At 10:02am today, Actual Leader crossed the equator, which means that all three boats racing on the Brest Atlantiques are now sailing in the northern hemisphere, with maxi Edmond de Rothschild more than a day ahead of its two rivals.

For the six skippers, one of the priorities towards the end of the race is to preserve their trimarans, which have been tested to varying degrees since the start in Brest on 5 November.

Maxi Edmond de Rothschild was the first to re-enter the northern hemisphere at 2:13 am on Thursday morning, with MACIF and Actual Leader both crossing the equator this morning, at 7:30am and 11:02am respectively, after exactly 24 days and 2 minutes at sea.

As was to be expected, given the respective speeds of the trimarans since Thursday morning, Edmond de Rothschild’s François Gabart and Gwénolé Gahinet overtook Actual Leader in the middle of the night.

As Gabart explained during the weekly video session held today: “I think we played the right strategy. On starting out, we were a little behind Actual Leader, and now we're back just ahead, so we're pretty happy. It was the right option to take.”

Aboard Actual Leader, Yves Le Blevec, who also joined today’s video session, has a slightly different take: “We were watching MACIF from the corner of our eye, and yes, they took a radically different option, but at the end of the day, we’re all on a level playing field in terms of strategy.”

Following the action from a distance, Franck Cammas gives his opinion: “I think it was a success for MACIF, which gained a hundred miles on Actual Leader. It proves that it was an interesting option to take, even if it wasn’t the simplest.”

That said, these two trimarans are still very close to each other as they attack the Doldrums, which Maxi Edmond de Rothschild passed through very smoothly yesterday. It’s looking like it will be a close call all the way until Brest. Especially as at this stage of the race, the trimarans all have their own set of damages.

Yesterday, in a session organised by his team, François Gabart said: “We won't hide the fact that we’ve had several problems that have slowed us down considerably, for example the drift before Rio. But right now, we're sailing at almost 95% of the boat's capacity, which is great for us!”

As for Actual Leader, Yves Le Blevec seems pretty satisfied with the state of their trimaran after 24 days at sea: “We have nothing major that is slowing us down; the boat's potential is intact, just as it was when we left Brest more than three weeks ago”.

Finally, for Edmond de Rothschild, which at 3pm today had a solid lead of 544 and 620 miles over its rivals respectively, the priority is to preserve the boat. “Our main concern is to sail through safe areas only and not overwork the boat; we're not in 100 percent attacking mode when changing our sails.

Our strategy now is to reach the Azores as quickly as possible, to get ahead of a front and catch a southerly wind to take us to Brest. We hope it will be plain sailing from then on in winds of around 20-25 knots. That would be the ideal scenario.”

A scenario that would mean Maxi Edmond de Rothschild arriving in Brest on the morning of Wednesday 4th December, after about 29 days of racing…