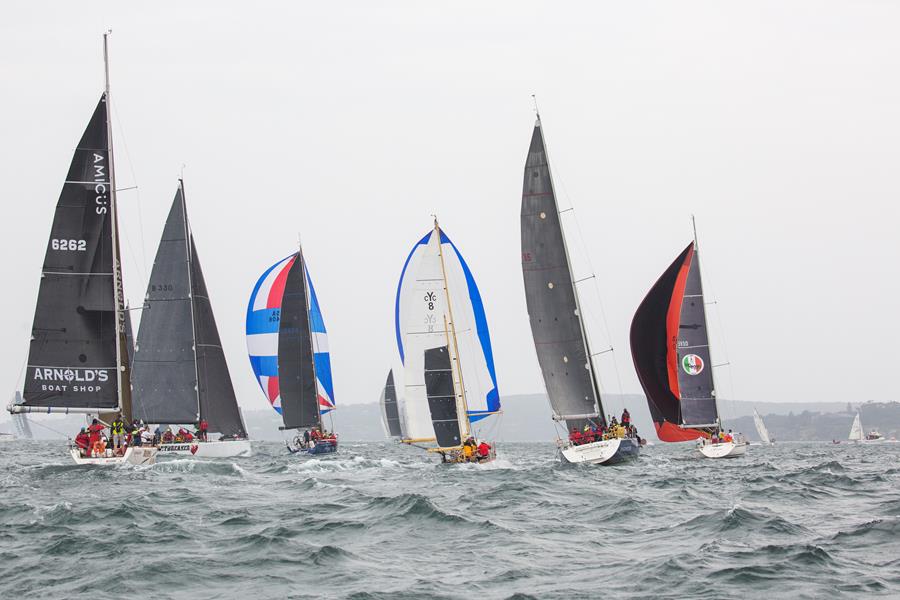 A blustery 25-knot southerly greeted the competitors for the 10am start of the Audi Centre Sydney Blue Water Pointscore Bird Island Race, making for a spectacular downwind start on Sydney Harbour on Saturday.

Colourful spinnakers and code zeros made a stark contrast to the smoky sky as the fleet sailed north to Bird Island some 40 miles beyond.

Of the two super-maxis, Peter Harburg’s Black Jack made it to open water first, Christian Beck’s InfoTrack trailing in her wake.

Making an impressive start was Quentin Stewart’s Infiniti 46R Maverick 49 from the UK with some hot young sailors aboard. Maverick 49 flew down Sydney Harbour on her DSS foils, but slowed as she passed Shark Island. The boat and crew are one of many with their sights firmly set on the 2019 Rolex Sydney Hobart Yacht Race.

Katwinchar, the 1904-built ketch now owned by Bill Barry-Cotter, is another team taking on the Bird Island Race in the lead-up to the Sydney Hobart. The oldest confirmed yacht to have ever competed the race to Hobart, the 1904 built boat has undergone a meticulous restoration, and in the hands of Barry-Cotter’s brother Kendal and veteran Michael Spies.

The heavy downwind conditions are forecast to shift towards the east this afternoon.