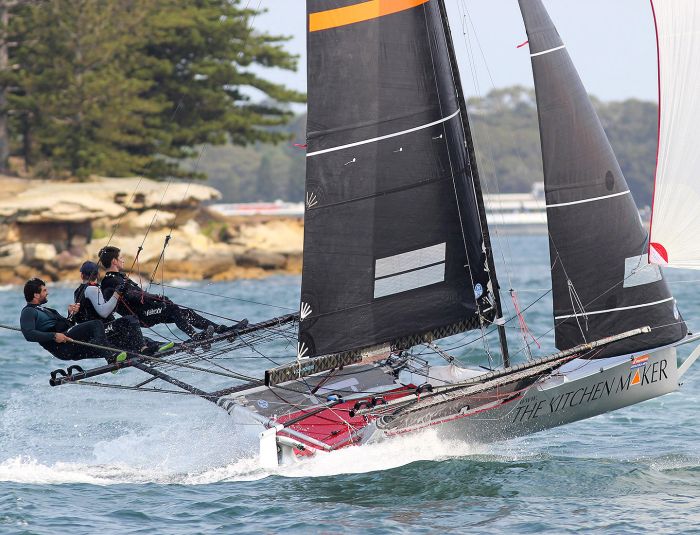 The Kitchen Maker-Caesarstone team came back to better form with a seventh place in Race 2 of the NSW 18ft Skiff Championship. Photo 18 Footers League.

The Winning Group team of John Winning Jr., Seve Jarvin and Sam Newton gave a brilliant exhibition to dominate the fleet and take out Race 2 of the NSW 18ft Skiff Championship on Sydney Harbour today.

After leading narrowly over the first lap of the course, Winning Group raced away over the second windward leg from Clark Island to the Beashel Buoy to defeat Shaw and Partners Financial Services (James Dorron, Harry Bethwaite, Tim Westwood) by 2m59s. Spring Championship winner appliancesonline.com.au (Brett Van Munster, Phil Marshall, Kurt Fatouris) was just another 2s behind Shaw and Partners, in third place. Rag & Famish Hotel (Michael Coxon) finished in fourth place ahead of the new Tech2 skiff (Jack Macartney) which was having her first race today.

Incredibly, the next four teams The Oak Double Bay-4 Pines (Aron Everett), The Kitchen Maker-Caesarstone (Jordan Girdis), Yandoo (John Winning) and Smeg (Micah Lane) were all separated by just 3s. with one sec. separating each skiff.

After taking a 10s. lead from Shaw and Partners Financial Service and The Oak Double Bay-4 Pines at the first windward mark, Winning Group led for the entire North-East course, although Shaw and Partners was only one boat-length behind Winning Group at the bottom mark on the first lap of 3-laps. At that point in the race, it looked as though it would develop into a great match race between the two champion teams, but the long second windward leg was devastating as the Winning Group team opened up a race-winning 2mins lead.

The race for minor placings was far closer and produced some dramatic finishes. Appliancesonline had recovered from a seventh placing at the first windward mark to cross Shaw and Partners only 400 metres from the finish, but the defending champion team came back to cross the line 2s ahead of Appliancesonline. A similar thing happened only 50 metres from the finish when Smeg sailed across the bow of The Oak Double Bay-4 Pines, only to have The Oak come back and beat Smeg home by 2s.

After a slow start to the season, The Kitchen Maker-Caesarstone team showed better pace and the Tech2 skiff is certain to be much better following an impressive 5th place after getting a slow start off the line.

Points standings after the two races so far are Winning Group on 2, Shaw and Partners Financial Services on 4, appliancesonline.com.au on 8, The oak Double Bay-4 Pines 9, Rag & Famish Hotel on 11, and Smeg on 15.

The Australian 18 Footer League's 2019-2020 Season continues next Sunday when the club will stage Race 3 of the NSW Championship.

Spectators can see all the teams while they are rigging, then follow the racing on board the club's spectator ferry, which leaves Double Bay Wharf, alongside the rigging area, each race day at 2pm.

The AeroMedia Live Broadcast team will also be out on Sydney Harbour to capture all the action for those who can't make it onto the water. The livestreaming is available by going to www.18footers.com and clicking on the '18 Footers TV' link.