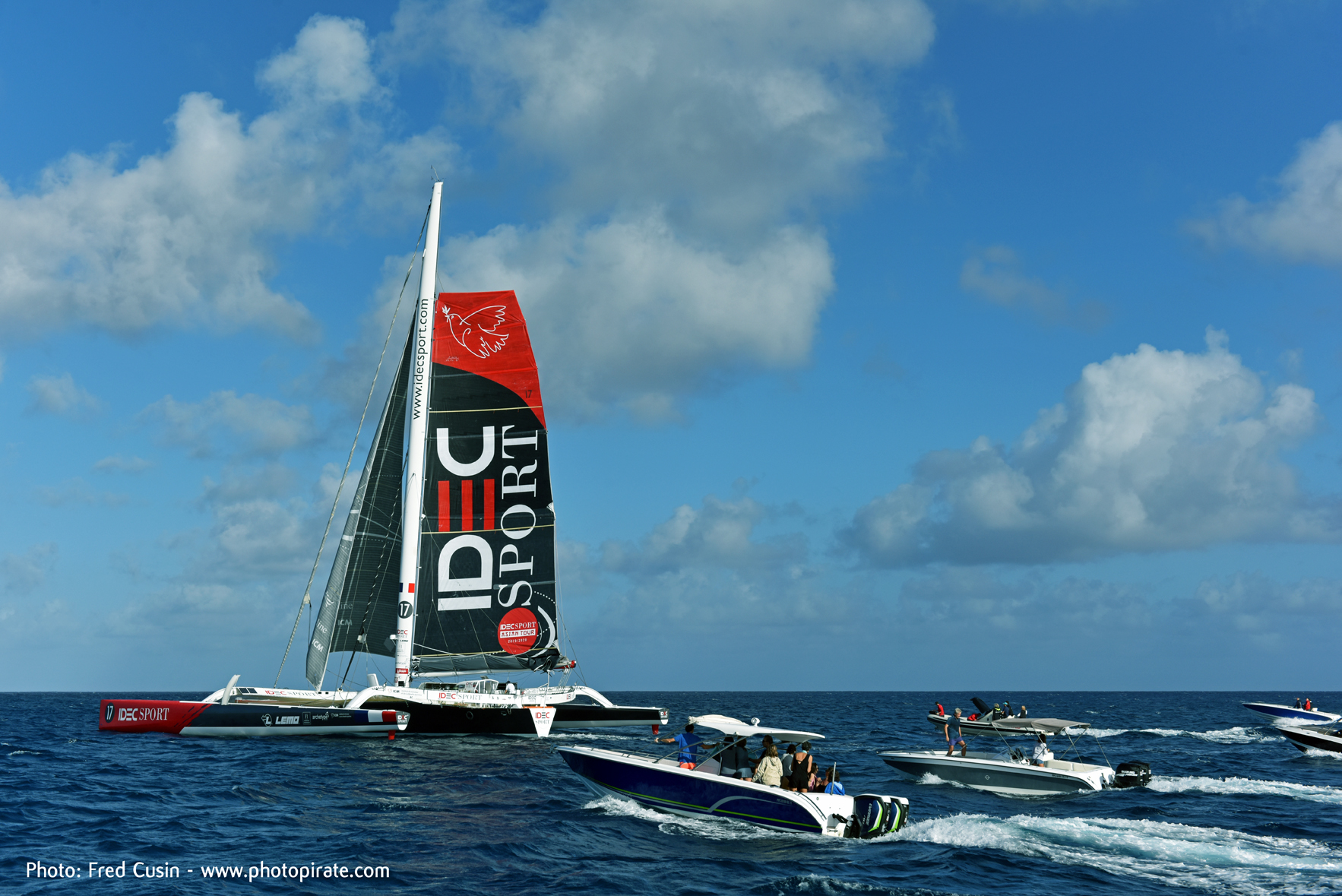 Eight days after setting sail from Mauritius, Francis Joyon, Christophe Houdet, Bertrand Delesne, Antoine Blouet and Corentin Joyon have reached the Sunda Strait, which is the gateway to the Karimata Strait, that narrow stretch of water between the Java Sea and the China Sea, close to the islands of Sumatra, Java and Borneo.

IDEC Sport arrived there in a very decent time after sailing the 2900 theoretical miles of the Great Circle Route from Port Louis. The maxi trimaran had to sail more than 4200 miles out on the water, tracing a parabolic curve towards the south of the Indian Ocean to avoid having to face the trade winds upwind. The trades would have shaken up the crew and the equipment and punished the boat for no good reason.

Francis and his men preferred to go for speed rather than the straight line, averaging more than 22 knots on this long route, where they sailed down close to 37 degrees south.

A different sort of adventure began this morning as they sighted the islands of Indonesia for the first time. It coincided with the wind dropping right off and the arrival of a strong head current, which caused the giant trimaran to drift towards Krakatoa. Last year, the spectacular eruption of this volcano hit the headlines.

“We’re working our socks off in these light airs struggling with a 2 or 3 knot head current in the unbearable heat,” said Francis.

The picture postcard image of the arrival off the islands, with evocative names such as Java and Sumatra, that they had been looking forward to seeing, is far from the reality the crew of the maxi-trimaran IDEC Sport is experiencing this morning.

“The coasts are shrouded in mist and we were wondering whether it wasn’t smoke from the many forest fires raving the region,” Francis added.

“It was all very emotional for us catching sight of our first sight of land after eight days of fast sailing in the trade winds. The wind not only dropped right off, but it happened very suddenly and we found ourselves drifting into the current.

“We did a lot of gybes under gennaker in two knots of wind, having to manoeuvre every five minutes. The whole crew is out on deck and we’re all beginning to feel tired. Those who tried to take a nap soon gave up, as the damp and humid heat is unbearable.

“We hope that when we enter the Java Sea that we will get some fresh air. It’s getting dark, and we need to be extra cautious. Just now, we got to within 30 metres of a steep cliff with some rocks poking out of the sea.”

The final stretch of the voyage as they tackle the crossing of the South China Sea towards Vietnam is likely to be tricky for the team. After the light winds off Indonesia, they should pick up a strong north-easterly air stream powered up by Cyclone Kamuri.

Gusts in excess of 40 knots are forecast ahead of the bows of IDEC Sport, and the final 900 miles or so look like being a bit of an effort, sailing upwind in strong winds.

“If only the mist would rise, we would be able to take advantage of the magic of the area,” sighed Francis, who estimates they will arrive in Ho Chi Minh City early in the morning (European time) on 3rd December.