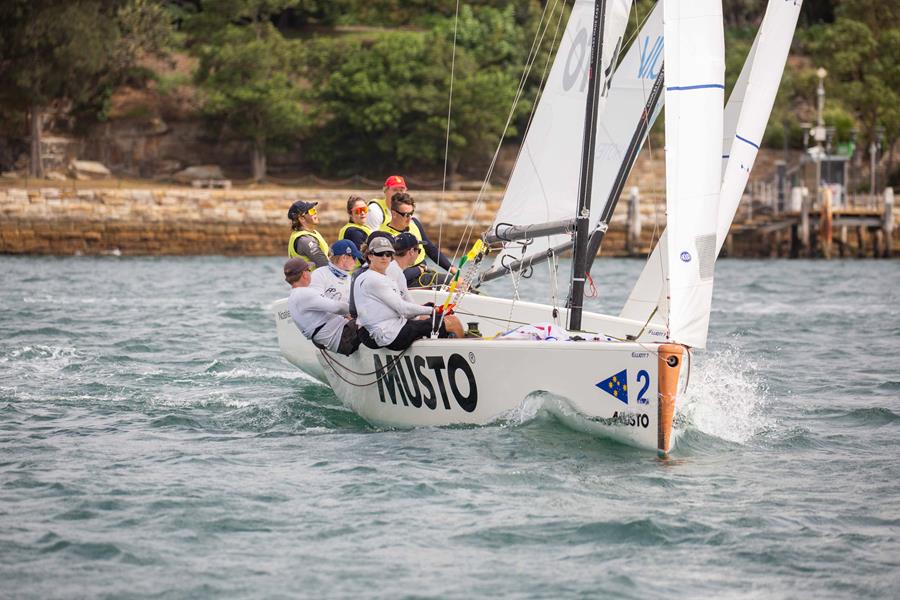 Jordan Stevenson and the Vento Racing team have been working hard to make their way to the top of the leaderboard. Credit - CYCA/Hamish Hardy.

There were some big movers on Day 2 of the Musto International Youth Match Racing Regatta as the international teams took charge, with all teams fighting for the prized top four spots which secures them a berth in the quarter-finals and allows them to skip the repechage round.

Jordan Stevenson from Vento Racing redeemed himself after the previous day's collision, which cost him a half-point deduction. Day 2 saw him and his team from the Royal New Zealand Yacht Squadron finish with a score of 6-0 to climb into the lead heading into Day 3.

The biggest mover of the day, however, was Great Britain’s Matt Whitfield, who skyrocketed from eighth to second. For the British team, this week is all invaluable experience as they campaign towards next year’s World Championship in the Elliott 7m class in Auckland, New Zealand.

For the host club, Cruising Yacht Club of Australia, and their three teams it was a mixed bag of results. James Hodgson and Tom Grimes are currently still tied in fifth place, battling it out with defending champion Frankie Dair for the remaining spot in the top four.

Three teams are now set for the Quarter-Finals, with Jordan Stevenson (NZL), Matt Whitfield (GBR) & Nick Egnot-Johnson (NZL) commanding the top three spots, booking themselves a place directly into the knock-out stage. Day 3 will see the completion of the final flight of the regatta, with Frankie Dair (USA) and James Hodgson (AUS) now the only two teams which can make it through to the knock-out round directly.

For the remaining teams, points will then restart for the second stage, with a repechage round scheduled for the bottom eight teams.