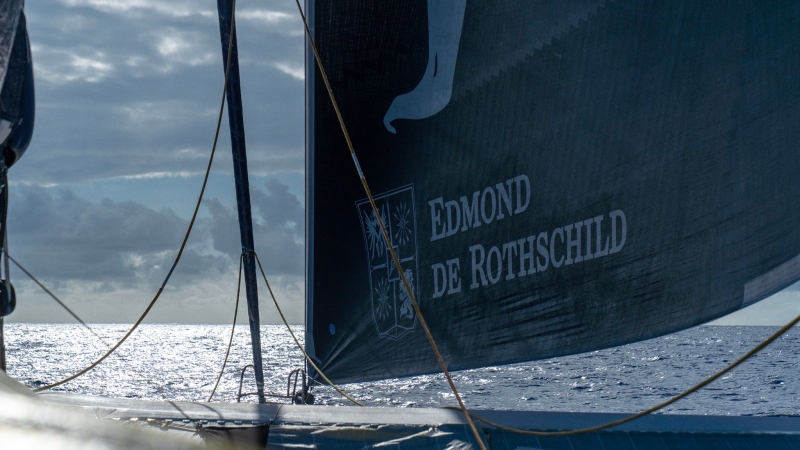 After crossing the equator last night, Maxi Edmond de Rothschild is now making its way across the Doldrums, with a comfortable lead over its competitors. Meanwhile, MACIF’s decision to head west has proved to be a very good strategy, and they are now closing in on Actual Leader at a fast pace.

Seventeen-and-a-half days after leaving the Northern Hemisphere, Maxi Edmond de Rothschild re-entered it last night at 2:13am, in the lead as they have been since the evening of November 14th. Franck Cammas and Charles Caudrelier, who on Wednesday at 3pm clocked a total of 2795 miles since leaving Brest, were quick to start their journey across the Doldrums, which, despite the cloudy conditions and lack of wind, shouldn’t slow them down too much.

With a lead of almost 500 miles over Actual Leader and 800 miles over MACIF, the two skippers aboard Maxi Edmond de Rothschild are right on track. After crossing the Doldrums, they will turn their attention to the weather conditions in the North Atlantic, and in particular the Azores High, whose positioning will determine how quickly they can return back to Brest. If all goes well, they are currently scheduled to arrive at the end of next week.

MACIF, which spent around four hours last night sailing at a slow pace in very light winds, has since been picking up speed, with an average of 28.8 knots between the 12pm and 4pm rankings. This is exactly what the skippers were expecting, as François Gabart explained in a video shot by their media man Jérémie Eloy: “We're once again faced with fairly shifty trade winds, that will be getting stronger in the coming hours. We’re happy to be in this position, but we now have to accelerate northwards to try and catch up. Actual Leader are in front of us at 45 degrees, and still have to tack to get in a good position for the Doldrums. In the coming hours, we should be able gain a lot of ground on them.”

The fact that the Doldrums are lighter to the west could equally benefit the two skippers of MACIF, compared to Actual Leader which is located further east, and boost their morale before they attack the final stretch of the Brest Atlantiques.