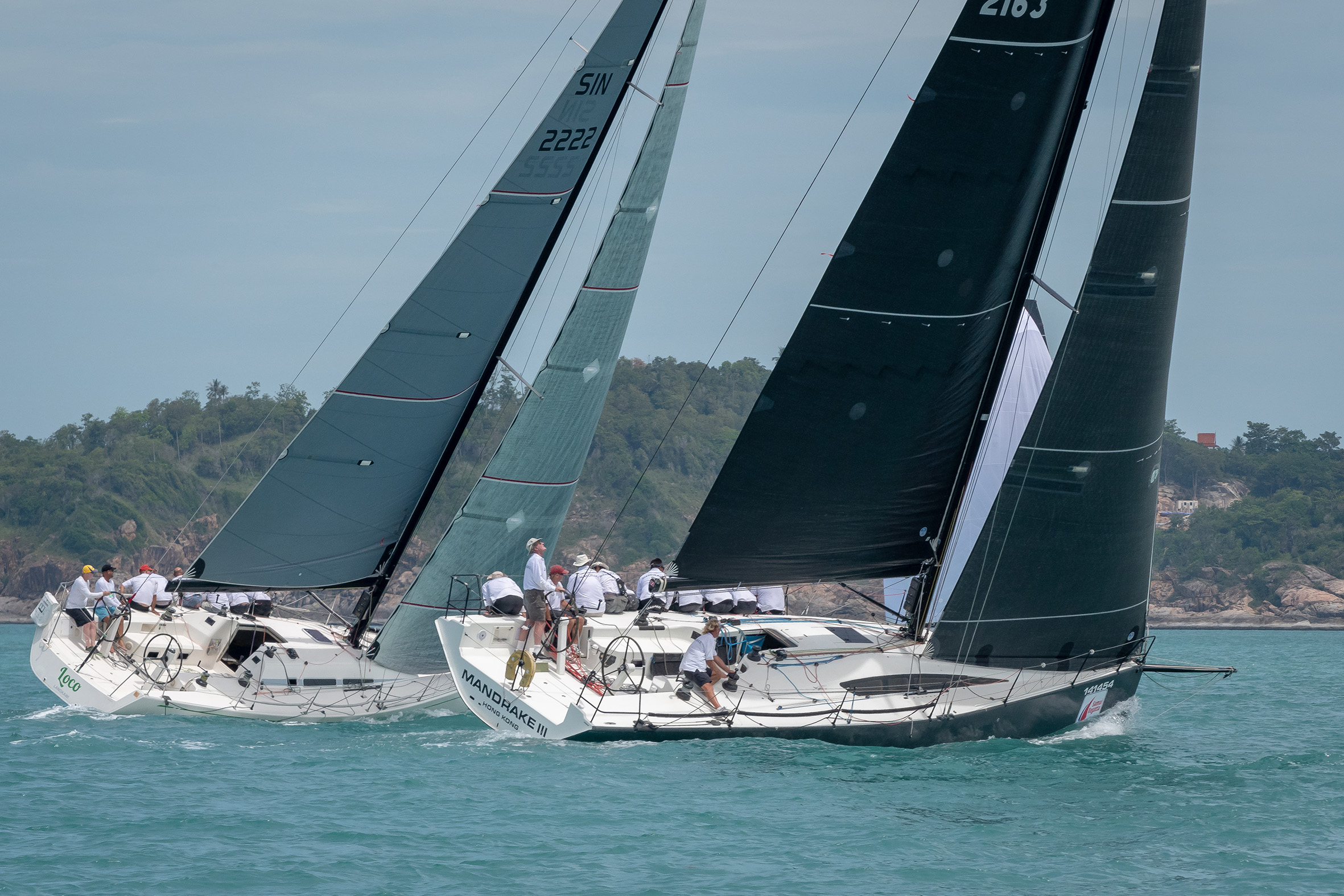 The sun teased and the wind held steady on the final day of the 2018 Samui Regatta. Race Officer Ross Chisholm set two windward/leewards for the keelboat and multihulls classes off Mae Nam Beach.

It's been a week of dominance by Kevin and Tom Whitcraft and their crew on the TP52 THA72. Other than a fourth place on Day 3, they haven't put a foot wrong across a wide range of conditions and have won eight from nine races, defending their IRC Zero title with a 17 point winning margin.

When you delve into the results deeper, however, the racing has been much closer than it at first appears with winning margins of eight seconds in Race 1 and only four seconds in Race 3, a trend that can be seen across the seven-strong class.

Today the battle was more about second and third places. Tensions were high with individual recalls for Ark 323 and Freefire in the first race and a general recall in the second. A second in Race 8 by the much improved Chinese team on Ark 323 (less than 60 seconds behind THA72 on corrected time) helped put some breathing space between them and Freefire (HKG) in the overall standings while a third for Zannekin (HKG) saw them leapfrog Alive.

Heading into the final race, Sarab Singh's team on WindSikher were sitting second overall with a five point lead over Zannekin and bearing any major mishap, had their place secured. A fifth in the final race for WindSikher was enough for them to finish second overall while a third for Alive saw them claim third place, two points ahead of Zannekin.

Seeing two or three TP52s on the start line of any regatta in Asia is quite special, but four is almost unheard of. A fifth TP52 was expected to compete this year but sadly had to pull out last minute, and there's talk of two more joining the circuit in the not-too-distant future – seven TP52s on a start line is a distinct possibility come next year.

Over Samui Regatta week all four have made it on to the podium but it was THA72's consistency that saw them claim the division win. Second and third place went down to the wire with Sam Chan's Freefire having a single point lead over Ark 323 with just one race to go.

Freefire drove their advantage home in the final race finishing second, and in the process claimed second overall in the TP52 division. Ark 323 had to settle for third, two points back.

Timothy Fox and crew on the chartered Fujin (AUS) saved their best for the final day – two wins from two races. A second for Mandrake III (HKG) in Race 8 meant Loco (SIN) had an uphill battle, needing to rein in a three point differential in the final race. Ultimately, it was too big an ask. While they finished second ahead of Mandrake III, their third place was enough for them to win the IRC One class.

Nick Burns and Fred Kinmonth, co-owners of Mandrake III, have been competing on the Asian circuit for more years than perhaps they would care to remember. Based in Hong Kong, they are stalwarts of the regional racing scene and have travelled far and wide competing in regattas with a number of Mandrakes and predominantly a Corinthian crew.

Not only have they defended their IRC One title at Samui Regatta this year, but this win is the cherry on top of their 2017/18 AsianYachting Grand Prix season. Having competed in eight regattas on the 13-regatta circuit this season, their top six scores count.

It was all change in Performance Cruising today when SailQuest Hi Jinks (THA) won the first race – their first win of the series. A second for Souay 1, despite some sail damage, was, however, enough for them to secure the title with one race to spare while they went on to wrap up the series with a win in the final race by 20 seconds on corrected time. Two DNS' brought Moon Shadow's (THA) series to an early end and a third place overall.

This gesture of sportsmanship helped Sudu Red score two wins on the final day and with that, the class title. Two second places for Sudu Grey (THA) meant a tie with Pixalux (AUS) which on count back (having more second place finishes over the series) finished second overall.