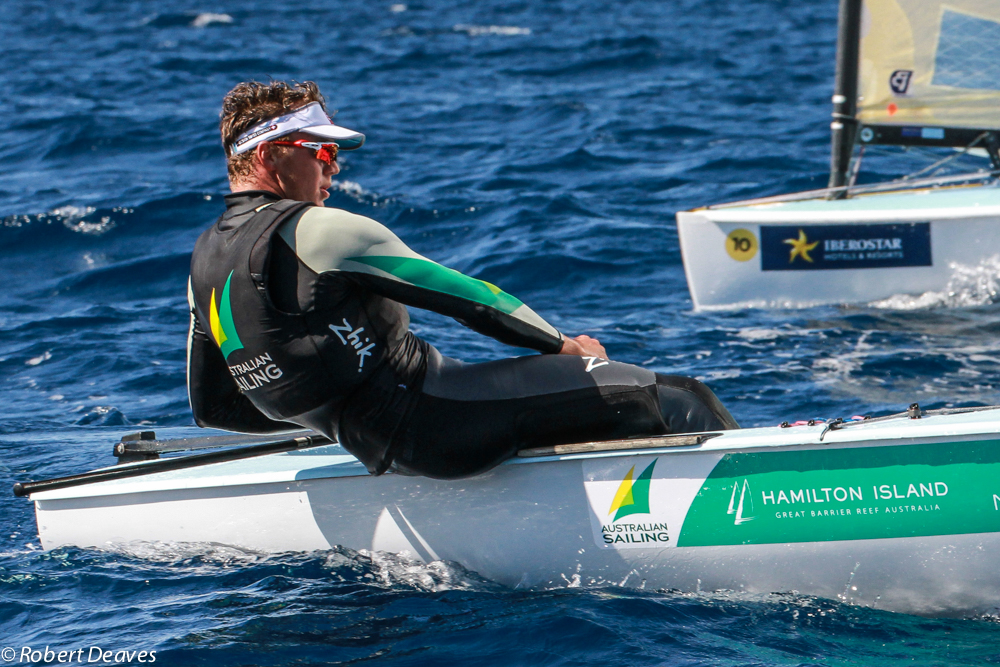 As the 47th Trofeo Pincesa Sofia moved into the Finals phase unfortunately the usually reliable sea breezes had not taken note of the transition to the real business end of the key Olympic indicator event.

Through the early part of the racing day light, lazy unsettled airs threatened the schedule . But a long day of waiting – both on the water and around the boat parks – was rewarded with high quality, intense competition for all classes except the RS:X which were signalled AP over A – no further racing – at 1900hrs this evening not having got their first Finals race away .

Breezy or light, Qualifying stages or Finals, there has been no discernible weakness in the performance of the runaway leaders in the Men's 470 fleet, Aussies Mat Belcher and Will Ryan. Their two wins today step them 14 points clear of USA's Stu McNay and Dave Hughes. Belcher and Ryan still maintain a scoreline of all firsts, discarding their one third place.
As they seek to accelerate improvement as much as possible from one Olympic Games to the next, different National Olympic squads embrace entirely different philosophies.

In the Womens 470, Australians Carrie Smith and Jaime Ryan cling to hopes of a medal race appearance, sitting in 10th place. Sasha Ryan and Ella Clark are 31st.

Both of today's fleet leaders in the Laser class are the product of similar ideals, programmes where four or five sailors work through the whole quadrennial as a close knit, tight unit. Competition within the group hones skill levels, information and knowldges is freely shared. Andy Maloney is top of his New Zealand group of four or five Kiwi Laser sailors along with Sam Meech, who is sitting out this regatta. Maloney's solid 8,5 today keeps him ahead of Croatia's 2014 European Champion Tonci Stipanovic who finished fourth at the 2012 Olympic Games. In the absence of leading Australians Tom Burton and Matthew Wearn, Jeremy O'Connell is sailing well to hold seventh place.

So, too, in the Laser Radial fleet Denmark's World Champion Anne Marie Rindom's two bullets today extend her overall lead. She is the product of what she calls the 'Danish Model'. The Danes group is coached by Piotr Wojewski and has been together for three years. They started out with four, tapered back to two and now have two younger girls included. That Rindom and Sarah Gunni Toftedal are first and fourth in the Trofeo Princesa Sofia IBEROSTAR fleet, taking 1,2 in the first Gold Fleet race today, says something for the Danish Model. Or may that yet be proven to be Danish Supermodel?

“We call it the Danish Model where we all train together and stay together. You dont have to be best friends but we share everything together, we tell each other everything. We started with four girls three years ago. Now we have two of us at the same top level and have two younger girls starting out with us. We all still work together. The level is very high at the top and it is crazy how much we have all improved together. If Sarah (Sarah Gunni Toftedal) and I did not have each other then we would not be where we are. Today we were first and second.” Explains Rindom, “

” And between the top Laser Radial girls now I think we are all so very strong now in all the conditions. We are working to be good in all conditions. I can be good in strong winds and I can have a great day in light winds. It is much more about being mentally strong now.”

Laser leader Maloney adds: “The regatta is going well so far. Really for me this is a chance to get another big fleet regatta under my belt before going to Hyeres and working on a few things, tactical big fleet things.”
” We have had such a good squad of four of five of us pushing each other all the way through the four years through in training. Now we are at the pointy end of it all. But the selectors will make their choice in May, looking at all the big events. It is really close with Sam (Meech) and we are both sailing really well. Hyeres is the last big event before May so that will be important.”

Training alliances are also founded between top crews from different nations. The philosophy of the best learning from close equals, and competition between each other, transcends national team boundaries. In the Nacra 17 Class the French four times world champions Billy Besson and Marie Riou train with Italy's Vittorio Bissaro and Silvia Sicouri, inviting each other to camps in Cagliari and La Grande Motte respectively. The top two Nacra 17s on today's rankings, after nine races are Besson and Riou who are now 22 points ahead of the young Italian world championshp bronze medallists.

In the 49er fleet the youthful duo Diego Botin and Iago Lopez are so far delivering the perfect riposte to being overlooked by the Spanish authority for Rio selection. They lead the class 22 places ahead of the Alonso brothers who clinched their selection at the World Championships after what was reported to be some slightly controversial boat on boat racing.

“Although we had our chances and ulimately had hopes to go to Rio, the truth is that we had never really seen us at the Games in Rio”.

Iago Lopez adds: “When we started to compete together our goal was compete at the highest level in Tokyo 2020.”

New Zealand's Josh Junior holds off world champion Giles Scott in the Finn Class, Australia's Jake Lilley becoming the only sailor to have won two races when he took the gun in Race 6. He is holding fifth place overall.

Scott reported: ” It was a lot better today. Yesterday was a bit frustrating really. I got it all wrong, a concertina of errors, so its great to get two solid results today and keep myself in there. A long hard day, lots of waiting, and when the wind did come in it came in strong.”