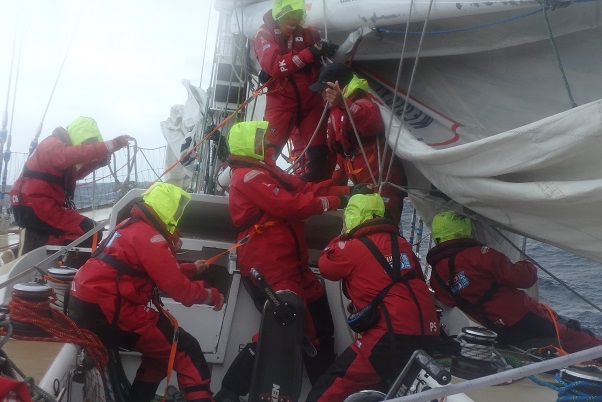 The upcoming Scoring Gate is on the minds of the Skippers as they debate weather options and the routing implications for the next four days on the Seattle Pacific Challenge. With another low forecast further north, the teams must decide whether they head further north to the Scoring Gate some 600 nautical miles away in search of extra points, or stay further south and keep heading east with a better wind angle.

Following a day of light winds yesterday, the fleet is reporting that the sky has gone grey again, and the front is expected to hit soon.  Gusts shouldn’t get to more than about 35 to 40 knots, but individual large squall clouds may, and probably will, give localised stronger ones, Simon Rowell, the Clipper Race’s Meteorologist advised the Skippers in their weather briefing today.

The teams are split into two distinct but closely packed groups, with the leading pack to the east, and the chasing pack further west but also further north where it is making good progress.

Unicef is still at the front of the fleet, with Garmin in second, and LMAX Exchange in third with just 4nM separating the trio.

Max Stunell, Skipper of PSP Logistics, in ninth place in the western part of the fleet, writes about the dilemmas facing the teams in his blog today.

“After running into a patch of light airs yesterday, we have been travelling in a north-easterly direction. It's raining and the temperature is noticeably colder than yesterday.

“The Scoring Gate for once isn't easy pickings for the leaders and currently looks like it may be the wrong side of a low pressure system which would mean smashing into some pretty big headwinds and no doubt sea state, but as this area of ocean is so remote there is comparatively little data and the weather forecasts may change,” Max said.

Darren Ladd, Skipper of IchorCoal, in twelfth place, says due to the unpredictability of the localised weather so far, for almost the first time this leg, he was able to follow a route projected by the Nobletec software.

“The last few schedules have helped us regain some of the lost miles between us and the speedy Unicef et al. Despite the distinct lack of desirable choices heading a little further north seems to be paying off for now. I am out of range of PSP Logistics and Visit Seattle on the Automatic Identification System but I look forward to seeing how we have all progressed against the rest.

“The crew are on standby as reefs are put in and out with the constant shifting of the wind strength. As the low passes north of us we should get an opportunity to fly a spinnaker,” Darren added.

“After the front goes through then the West Pacific becomes somewhat of a one-system ocean for a while as the low spreads and moves east.  This could give really good sailing conditions for a few days with moderate to strong north-north-westerly to north-north-easterly winds if the fleet can then keep ahead of the ridge of high pressure developing behind it,” Simon concluded.

Who will go for the Scoring Gate in search of three, two and one extra point for first, second and third to cross?

*All positions correct as of 1000UTC.

If you are being inspired by the crews and would like to join the race yourself, click here.