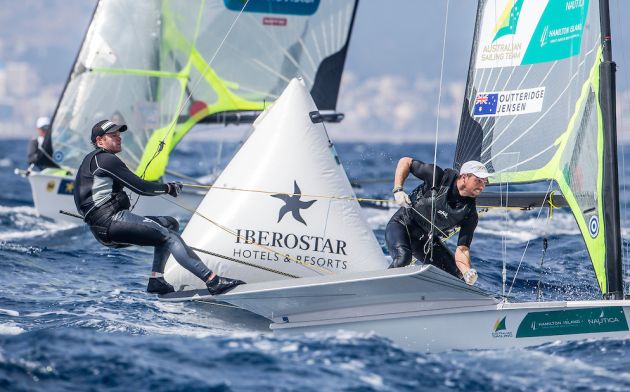 Iain Jensen goes for the spinnaker hoist at a mark rounding in Palma. Photo Jesus Renedo/Sofia.

It was Last Chance Friday at the Trofeo Princesa Sofia IBEROSTAR. The Olympic classes regatta on the Bay of Palma offered the final opportunity for European nations to qualify for the 2016 Olympic Regatta in August and today's last Finals races saw some dreams of Rio glory kept alive, whilst others were washed away in the heavy spring rainfall and unsettling winds.

It is hard to consider that the tension, emotions, tears and traumas of today will be in any way topped in Saturday's medal races. In the Men's 470 Class Mat Belcher and Will Ryan sat out the last race today. Because they could. So too in the Nacra 17 Class France's four times world champions Billy Besson and Marie Riou need only to compete in the Medal Race to clinch the Palma title. A broken rudder for Britain's world champion Giles Scott leaves New Zealand's Josh Junior with a straight run at the Finn title, 19 points ahead of second.

Ireland's Ryan Seaton and Matt McGovern will start the 49er Medal Race with 15 points of margin ahead of Australia's 2012 Olympic champions Nathan Outterridge and Iain Jensen who pulled themselves up to second today.

The big ticket matches of the Medal Races will be in the Women's 470 Class where Brazil's Fernanda Oliveira and Ana Barbachan start tied on the same points as the young British crew Amy Seabright and Anna Carpenter. Andy Maloney has 17 points of a lead in the Laser class which points to a possible Kiwi double in the Men's Singlehanders.

To the wire.
The last spot for a European nation in the Men's 470 Class had to be decided on countback. On the final reach of the last race the young Italian pair Matteo Capurro and Matteo Puppo had done enough to wrest the national qualification place from the Ukranians Boris Shvets and Pavlo Matsuyev who had started the day with a three points lead over the Italians.

Both finished locked on 126 points apiece, in 14th and 15th respectively  but the Ukranians finished the regatta with their best score being a second place which outpointed the Italians' sixth. The still Ukranians had to wait to find out if a possible protest against them arising from the first race of the day would go to the room, but it didn't.

“The guys are very happy. It has been a long and very stressful day for them but we are all happy. They have had this dream for a long time and it is still alive. Our country has a good history in the 470.” said their coach Volodymyr Kyselov.

The young Italians took some time to come back to the beach but were far from despondent:
“To finish even on points is hard. Until the last reach we could qualify the nation but it is hard to take right now. The regatta was good and we sailed well. We are still young, just 22 and so we look forwards.”said the Italian crew Puppo.

Turkey seal the deal
The close battle in the high octane Finn class sees Turkey qualify thanks to Alican Kaynar keeping his nerve top return a 14th in the penultimate race and so finishing with a 10.5 points margin over the Czech Republic's Ondrej Teply who made a 31st and 13th over the last two races of the season:

Kaynar, who represented his nation at the 2012 Olympics, looked relieved and delighted as he sailed back to the dock at the Club Nàutic S'Arenal:

“When we started today I had two very close opponents, the Czech and the Russian. In the first race I tried to concentrate on my race to make a good result to put a few more points between us, and I managed that. I finished in front of them. Then in the second race I just had the Russian close to me and I stayed close to him to guarantee my place and everything went well. It was a nice day but a difficult day but everything went well. It was a very tough week. This week more than 30 people were trying to qualify their country. And also all the time it was windy conditions, from many directions, so it was very challenging.”

” Over the last four years my wife and my parents have given me a lot of support, so it was a lot for my family and my federation, they support me to to get to this point.”

A break in racing during the early afternoon as heavy rainfull played havoc with the NE breeze which dropped away before veering to the NW and building to 15 to 17kts at times. The wait increased the tension for the crews had all but qualified their nation, not knowing if they would race again.

In the 49er FX Class Noora Ruskola and Camilla Cedercreutz had Finland's qualification within their grasp after winning the penultimate race, also squeezing into Saturday's medal race in 10th overall.

“This is the third time we have tried to make the qualification for Finland and have recently missed out at the Worlds. We were confident we could do it here but we had not had a good regata for a while, so we are pleased to have done it when we needed to.  We are happy to get the country spot. We had 27 points on the Austrians and we worried they might match race us. They did come and annoy us a little and so we were not so focused at the start. But the next race we went out and won and that was enough.” said helm Ruskola.

Tears of joy
Israel qualified in the Women's 470 Class thanks to the ninth of Gil Cohen and Nina Amir who also confirm their own selection. It will be Cohen's second Olympics after 2012:

“I have learned so much from the last time. We just needed to do what we knew we could do today and it would be OK.” said Cohen.

Her young crew Amir was fighting back tears on the beach:
“This has been my dream to get to the Olympics and I will be going. It is unbelievable.”

It was a red letter day for Hungary, qualifying in the RS:X and the Laser Radial. In the Radials Maria Erdi closed out qualification by making the cut to the Medal Race in ninth. As the Laser Radials have two country qualification spots Sara Carmo ensures a Portuguese berth. Correspondingly the two Laser Men's spots are Russia and the Czech Republic.

For the Czech Republic's Teply family, Last Chance Friday finished with mixed emotions, Viktor qualifying the nation in the Laser and Odrej just missing out in the Finn.

ALL NATIONAL QUALIFICATIONS ABOVE MENTIONED ARE SUBJECT TO FINAL RATIFICATION. RESULTS ARE PROVISIONAL.