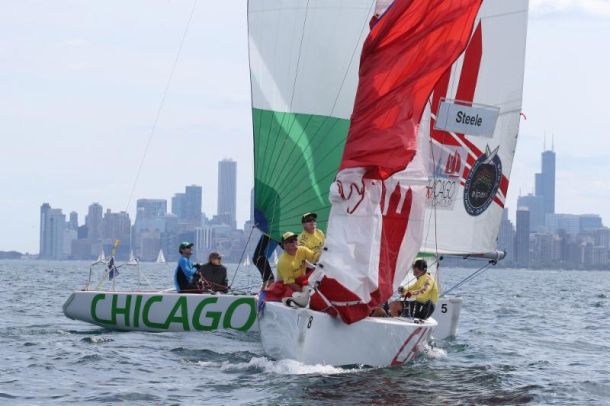 Chicago, IL — It was another perfect summer day on Lake Michigan for the 12 teams assembled here for the Chicago Match Cup Grand Slam, with the southerly breeze remaining steady enough to complete the remaining matches needed to finish the Round Robin and start the first-to-three point Quarter-Finals among the top eight teams.

Having an excellent series with help from Taylor Canfield and the US One match racing team, David Storrs entered the day with one loss to Matt Jerwood from Australia yesterday, but went undefeated today to win the Round Robin 11-1. In defeating yesterday's leader and today's runner-up, Chris Steele and his 36 Below Racing team from New Zealand, Storrs earned the right to choose his opponent in the first-to-three point Quarter Finals, and he choose CMRC's Steve Lowery.

On only four wins in the Round Robin, Lowery barely made it through to the Quarter Final stage were it not for a critical battle won against fellow CMRC sailor Will Holz, also on four wins.

Other teams that made it through were two Australians on 7 points each, Matt Jerwood and Sam Gilmour, who are now paired against each other in the Quarter-Finals. CMRC's Don Wilson finished the round robin with 6 points and is now locked in battle with Chris Poole, who finished the prior stage on 7 points.

And the last pairing in the Quarter-Finals is Steele up against young Swede Patrik Sturesson, who qualified to advance on having earned 6 wins from the Round Robin.

In this stage, Steele and Storrs dispensed with their opponents in three straight matches, leaving the Wilson-Poole and Jerwood-Gilmour pairings left to resolve. Wilson is against the ropes now, having only one win, and must win his first match of the day tomorrow, since Poole has two wins already.

Likewise for Gilmour: he must win his first match to keep his chances alive to advance to the next stage tomorrow, the Semi-Finals.

Another day of southerly breeze is predicted, so if the weather permits, after the remaining matches of the Quarter-Finals there will be a Consolation Round of matches held during the Semi-Finals to determine the 5-8th places.

Then the Finals and Petit-Finals will be held in a format to be determined tomorrow based on weather and timing.

Racing starts tomorrow once again at 0900.