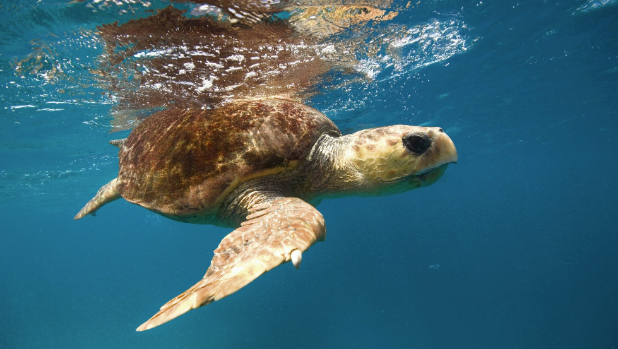 A boom in the number of sea turtles in Bermuda has caused concerns for America's Cup authorities. Photo stuff.co.nz.

Have you heard the one about the turtle and the cats? It seems one of the world's slowest reptiles is endangering some of yachting's fastest boats.

And it's no joke. In fact, the feeling is mutual as Bermuda authorities move quickly to clear the America's Cup waters of sea turtles.

It's a case of preserving the beautiful creatures and minimising the chances of damage to some of the most expensive items on the multi-million dollar catamarans – their razor-edged foils and rudders.

“We've seen a lot of turtles and other debris out there and we try to avoid them wherever possible. You can't engineer daggerboards or rudders strong enough to withstand hitting something like that. It is a concern. We hope that for the actual racing the area will be protected by a barrier of superyachts,” Team Japan skipper Dean Barker warned last month.

Some of the six syndicates involved have already had to undergo repairs after collisions with the hard shells of the turtles.

Barker's wishes have been met with the Bermuda government ordering turtles to be collected and temporarily relocated to a purpose-built ocean enclosure near the Bermuda Aquarium, Museum and Zoo.

Continue reading this article at Stuff.co.nz