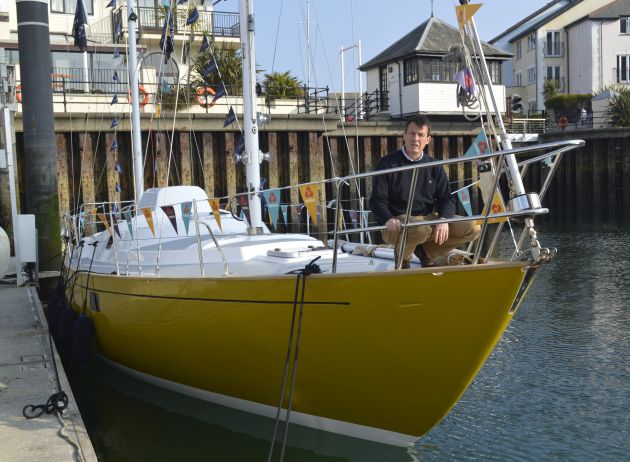 Cousot (45) is one of 30 yachtsman from 13 Countries to have entered the 2018 Golden Globe Race, which celebrates the 50th anniversary of the original Sunday Times Golden Globe Race and the success of Sir Robin Knox-Johnston, the sole finisher, in becoming the first man to sail solo non-stop around the world back in 1968/9.

Sir Robin prepared his 32ft ketch rigged Suhaili for that momentous circumnavigation at the same boatyard in Flushing where Cousot and two other GGR skippers, Ian Reid and Nabil Amra have chosen to have their yachts prepared for the Race. The two other entries will be launched at the Falmouth Boat Co later this year.

1969 also marks the 50th anniversary of The Open University, and Antoine, who is a graduate from this successful on-line institution, plans to use his entry in the GGR to raise £1 million and gift 50 deserving individuals with the chance to change their lives like he did, through education.

“I took up an Open University MSc degree course at a late stage in my life while serving as a professional yacht skipper, and the experience changed my life.” Says Antoine, adding, “The goal of this scholarship fund is to inspire others to improve themselves in a similar way through education. The fund will provide an opportunity for 50 students to take up a Degree course of their choice.”

For further information about the Scholarship fund, click here:

Cousot’s Goldstar Golden Globe Race campaign is supported by several French companies including the watch manufacturer LIP whose last brand ambassador to sail around the world was the famed yachtsman Eric Tabarly. “Eric was one of my heroes when I was a boy. I’ve read all his books and followed all his races. I feel very privileged to now be following in his wake,” says Antoine.

About Antoine Cousot.
Antoine Cousot is a professional sailor based in Noirmoutier, France, with his wife and three children. He has sailed the equivalent of three times around the world, delivering boats and skippering large luxury yachts. With 15 oceans crossing under his belt, Antoine has extensive experience and skills on boat handling and passage making. In 2015, Antoine sold his 45’ steel ketch to participate to the 2018 Golden Globe Race, and purchased the first Alan Hill designed Biscay 36 class ketch built in 1975 at Falmouth Boat Co.

About Goldstar
Goldstar is one of four Falmouth built Biscay 36 class yachts entered in the 2018 Golden Globe Race. The yacht has been extensively strengthened and rebuilt by the Falmouth Boat Co in Flushing to withstand the rigours of the Southern Ocean. After a series of trials that will include sailing under jury rig in the open waters of the Western Approaches, Cousot will sail her to his home port of Port de l'Herbaudiere, France early in June ready to introduce the boat and his scholarship fund campaign to the French public on June 15.

At the end of June, Antoine will embark on a 2,000 solo qualification trial from Vendée to the Azores and back, returning to Falmouth during the latter part of July where he will be based until the Golden Globe Race start from Plymouth on June 30, 2018.

About the 2018 Golden Globe Race.
This 50th edition of the Sunday Times Golden Globe Race is a celebration of the original event and Sir Robin Knox-Johnston’s achievement in becoming the first man to sail solo non-stop around the Globe. Competitors in the 2018 Race will all be sailing rugged traditional production yachts like Cousot’s Goldstar without the benefit of modern electronic aids.

The challenge is pure and very raw, placing adventure ahead of winning at all costs. All who finish will be heroes for this is a race for those who dare – the equivalent of climbing Everest without oxygen. Cousot and his rivals will be navigating with sextant on paper charts without GPS or electronic self-steering. They will hand-write their logs and determine the weather for themselves. This will be a lonely 9-month challenge. Only occasionally will they talk to loved ones and the outside world when long-range high frequency and Ham radio’s allow.

The GGR starts from Plymouth on June 30, 2018 and the winner is expected to complete the 30,000 solo circumnavigation in around 260 days.

Before the start, the Golden Globe Race fleet will congregate in Falmouth on June 14, 2018 to salute Sir Robin Knox-Johnston and his yacht Suhaili and mark the 50th anniversary of his departure at the start of his race back in 1968.