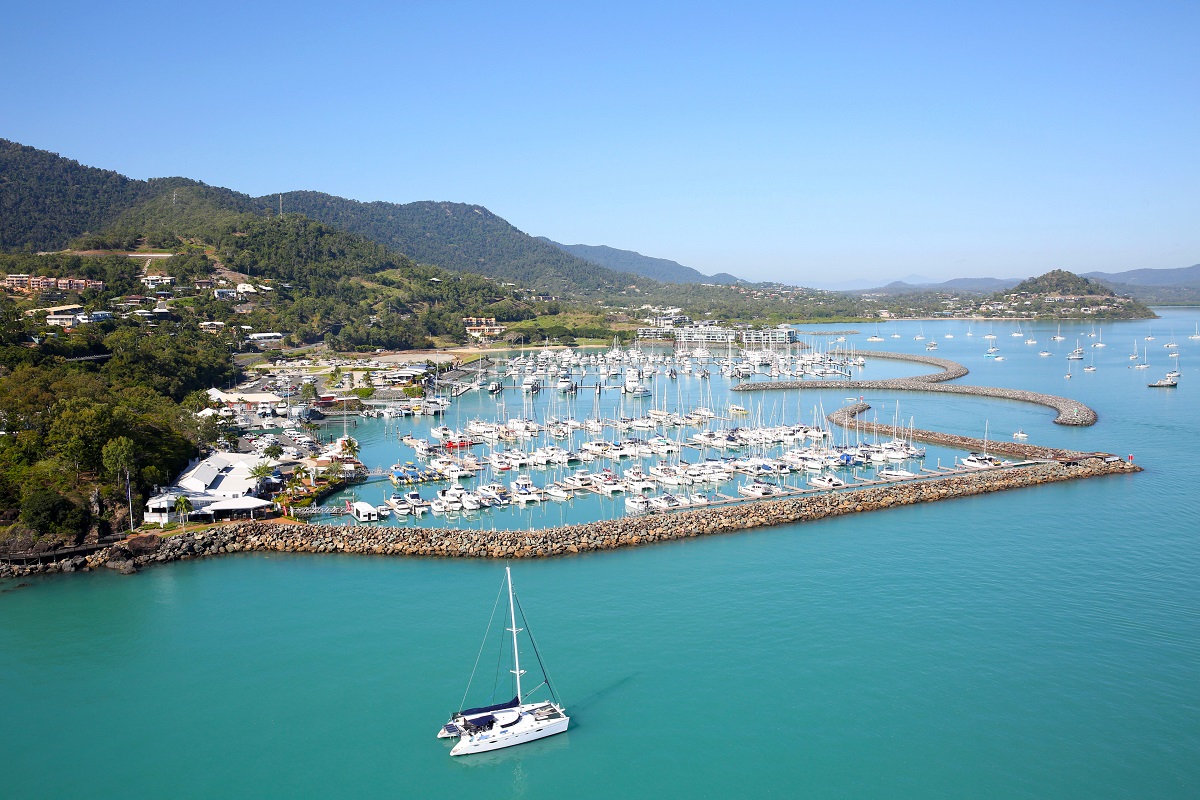 While clean-ups are still in progress in the aftermath of Cyclone Debbie, all in the Whitsundays are working hard to make sure everything is ready for the winter season of racing and cruising, including, of course, for Airlie Beach Race Week, to be held from 10 to 17 August 2017.

You have to hand it to the Queenslanders, they don’t let a cyclone dampen their enthusiasm or spoil their winter business with tourism a major factor for the region. There isn’t time.

Nor do they complain – it’s noses to the grindstone. Locals need to get back to normal and be ready for the influx of the hundreds of thousands who flock to this stunning playground each year.

It is no surprise therefore that Luke McCaul, General Manager at Abell Point Marina, is amongst those went above and beyond with his staff to look after his clients’ interests and keep the business afloat.

In 2016, Abell Point Marina became the first marina in the world to attain 5 Gold Anchor Global Marina Accreditation, so McCaul and his crew have a reputation to protect.

“We were back to business quickly, back to work immediately,” McCaul commented. “The cyclone is behind us, so the message we want to get out there is that our focus is preparing for the winter season for racers and cruisers. It’s a busy period for us and already boats are booked in for Airlie Beach Race Week.

“From July this year, all 507 berths will be back in service. We had no choice but to be ready. We lost 100 of our 507 berths, but we’ve already demolished the damaged ones and we’re currently piling them,” said McCaul, adding: “We have 407 berths that did not suffer damage. We are a large marina, so there is plenty of room.”

At Port of Airlie Marina, witnesses observed the Marina’s Operations Manager, Clayton Matthews, out and about before the cyclone, making sure his clients’ boats were ready, making good some that weren’t, thereby saving them from destruction.

Matthews says, “Port of Airlie is open for business post Cyclone Debbie. Construction of the new D Arm berths, ranging from 15 metres to 30 metres, has commenced and is scheduled for completion in late 2017. With 70 percent of the unique 90 plus year berth lease options being taken, only eight berths remain.”

Those entering Airlie Beach Race Week Festival of Sailing who are yet to book their berths, need to do so quickly to avoid missing out.

Officials from Whitsunday Sailing Club are happy with how the entry level of the annual event is progressing, but remind boat owners that it is only three months away – and accommodation and berths will fill quickly.

So far, entries have been received from Western Australia, Victoria, South Australia, NSW, Tasmania and Queensland, not to mention the strong support from the locals, such as WSC’s Kevin Fogarty, a regular with his Beneteau 40.7, Twister.

For those who would like to race, but are yet to find a boat, and equally for those short of crew, select ‘On Water’ from the main menu at the official website and click on ‘Crew Wanted/Available’. It does work, with some great match ups made over the years.

You can also find charter boats in this section and delivery skippers. There is no excuse not to be there.

There is also an excellent accommodation selection under ‘Local Info’, so book now to move into your favourite hotel/motel/unit/house.

For entry and Notice of Race, go to: www.abrw.com.au/sailing/entries