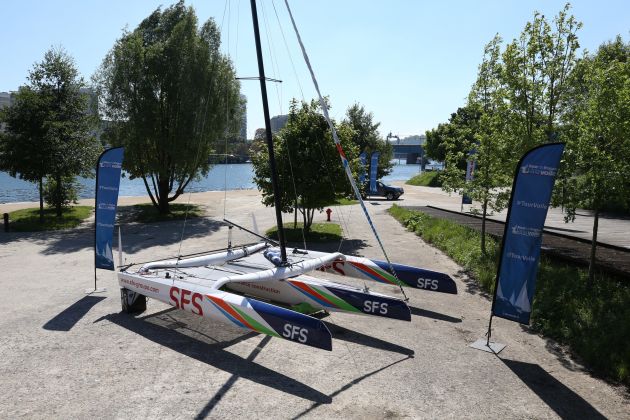 Since 2015 and the switch from single-hulled vessels to the livelier Diam 24 multi-hull boats, the Tour de la France à la Voile has not experienced such enthusiasm. To date, 31 crews have confirmed that they will be taking part, whilst other projects are in the finalisation stage. Consequently, an exceptional fleet will be present to celebrate the 40th edition of the event.

There will be a strong participation of women with the presence of Pauline Courtois and her 100% female crew Helvetia by Normandy Elite Team, as well as the return of Elodie-Jane Mettraux who, after the most recent Volvo Ocean Race on board Team SCA, will be reacquainting herself with an old racing flame as the project manager for the two Ville de Genève – CER teams.

“One of the assets of the TDFV is its assorted field made up of experienced sailors but also young talents and amateurs,” says Sofian Bouvet, skipper with Team SFS. “This regatta is a coming together of sailors from different environments, from multi-hulls to ocean racing, not forgetting Olympic racing. It promises to be an exciting race: an extremely multi-faced field with many different approaches and a high standard.”

Like the beginning of the season which witnessed keenly contested regattas, the standard on the Tour de France à la Voile 2017 is set to be high. The general consensus is that the teams are better prepared and race-ready earlier on, as explained by Quentin Delapierre, skipper with Team Lorina Limonade – Golfe du Morbihan and winner of the Tour de France à la Voile 2016: “The field will be very dense for this 40th edition with structured teams and the return of Olympic athletes.”

After a revolution in the format in 2016, 2017 will be the year of confirmation. Alternating water-sports stadiums and coastal regattas, black flags, finals, etc., the formula has proved its worth and filled the teams with enthusiasm.

There are several notable changes, such as the switch in finals in water sports stadiums from 6 to 8 Diam 24 boats. “It will open things up,” says Quentin Delapierre. “It’s good news for the outsiders. At the front, the competitors will all be battling to keep their places, because there will be a bigger risk of finishing in the bottom half of the table”.

There will be plenty of challengers for victory, some of whom have featured in the top of the table on the Grand Prix Atlantique, Spi Ouest France or Grand Prix Guyader such as Fondation FDJ – Des Pieds et Des Mains, Omansail, Team SFS or also Beijaflore sailing. The Lorina Limonade – Golfe du Morbihan team, which especially stood out in pre-season, know that they will have much to do to retain their title, which they won in imperial style in 2016.

The Event Village: a genuine experience for spectators

For this 40th edition, the Tour de France à la Voile Village has been redesigned to put the spectators at the heart of the regatta.

As a result, among the new elements is the spectator zone in the heart of the Village: every 30 minutes, a race report will take place in this zone with a live link between the presenter and an on-boat commentator, in order to receive the latest news from the regattas and understand the finest details of the competitors’ racing strategies.

La Quotidienne (the daily programme) is the Tour’s TV show and will be recorded live everyday in front of the public between 15.30 and 16.30, in the presence of renowned contributors before being repeated the following day on La Chaine l’Equipe at 11. The France Télévision and Canal Plus groups will also be broadcasting the most striking images of the Tour de France à la Voile 2017.

As regards events for the public, a Diam 24 boat entirely decorated in the colours of the FDJ Foundation will be on display at the heart of the Village, with educational presentations and sailing grinder activities. Inspired by the IMOCA, Accromât will be a real challenge for spectators who must climb to a height of more than 16 metres using the olivette system.