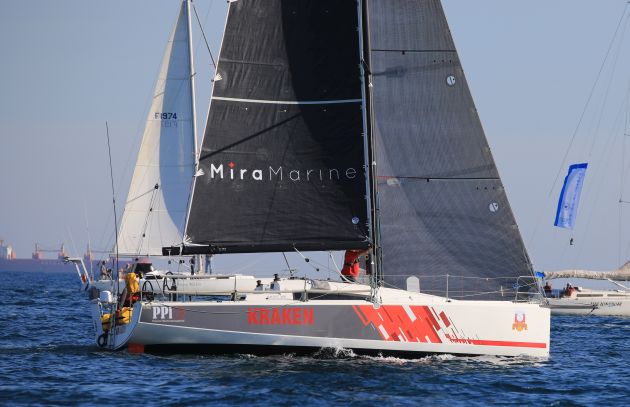 Following Saturday’s start of the Fremantle to Bali Ocean Clssic, Garth Curran’s 58 footer Walk on the Wild Side is leading the Bali fleet, enjoying light breezes and warm weather. The race record is now certainly safe for another year or two while the fleet inches its way past the fabled Zuytdorp Cliffs.

Not everyone took the traditional path between the Abrolhos and the mainland, with the two Buizen’s (Craig Hansen’s 52 footer Napea and Rob Northcoat’s 48 footer Scarlet Ribbon) both electing to sail past the western side of the island group.

It is clear that wind pressure is a major concern for the race fleet. Local bands of pressure are allowing some to make great gains, only to give it up again when the breeze moves elsewhere.

Two 34 footers, Thelma and Freja left two days earlier than the official start and are in Shark Bay heading for Carnarvon, where they will refuel, take on water and supplies before clearing Customs and sailing on to Bali.

While Wild Side is setting the pace near Steep Point, the surprise so far has been the performance of Todd Giraudo’s little Jeanneau 3600, Kraken. Sailed two up as a trial run for next year’s Melbourne-Osaka Race, the boat is sailing alongside Mike Giles’ Sydney47 Endorfin, off Kalbarri.

Kondili, the Hanse495 sailed by Phil Hearse, his wife Robbie and son Josh, leads the Rally fleet through the passage between the Abrolhos and the mainland, but is not far ahead of Napea.

Dave Kenny’s double hander The Edge was forced to retire in the early hours of the morning when her electrical system failed. Her very disappointed crew is returning to Fremantle.