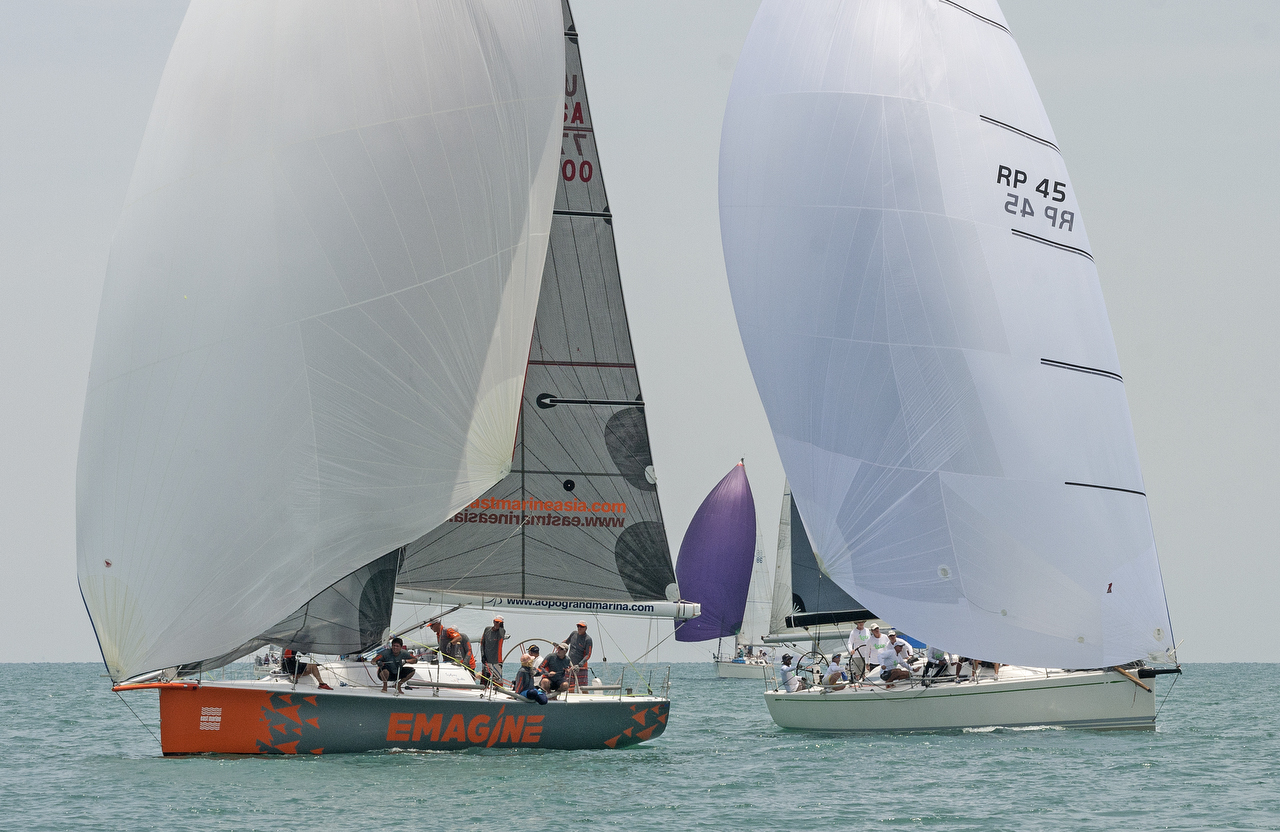 Pattaya, Thailand – All was back to normal on Day 2 of the Top of the Gulf Regatta as blue skies returned to greet the sailors, the storm clouds of yesterday were nothing more than a memory, as a fresh 10 knot breeze allowed race officials to get in a full race for all classes.

On the keelboat and multihulls course it was time to shake things up with some passage racing for all except the Platu class which continued banging the corners with three windward/ leewards bringing their series total to six with a maximum of 10 scheduled.

Light winds and windward/ leewards have proven to be the Achilles heel for Kevin Whitcraft's THA 72 (THA) so far this regatta, with the smaller boats in IRC Racing 1 having the rating advantage in such conditions.

In Race 1 today it proved so again with Emagine (AUS) and Loco (USA) both finishing ahead. And in a longer passage race in the afternoon the crew on THA72 hit their rhythm, adding a second win to their tally, moving them to within two points of series leader, Scott Bradley’s crew on Emagine.

At the top of IRC Racing 3 it was business as usual with Gary Baguley's El Coyote (AUS) claiming two more wins today.

Step two and three on the podium, however, was shared between Nautical Wheeler (USA) and Magic (AUS) with the latter revelling in the longer distance race today. Despite the apparent dominance of El Coyote, there was little separating them from second place on corrected time.

In a single race along the coast towards Pattaya for the Cruising class, Le Vent (THA), skippered by Pote Suyasinto, claimed line honours. However, after more than three hours of racing, they couldn't correct out to win, so it was Chris Mitchell's Lady Bubbly (AUS) taking those honours by just five seconds.

Pine-Pacific (THA) in the Platu class continued their form on Day 2 with second place in Race 1. Two mid-fleet finishes in the final two races of the day for Ithinai Yingsri and his Pine-Pacific crew, meaning a slide down the standings to fourth overall.

The big winner today was Chris Way and his Easy Tiger 111 (AUS) crew whose 4,1,2 scoreline lifts them to the top of the Platu standings. They are four points ahead of Royal Thai Navy (THA), skippered by Wiwat Poonpat, whose 3,5,1 scores leaves them tied on points in second place with Rolf Heemskerk's Team Viewpoint (NED).

It was all change in the Ocean Multihulls class today with the Corsair trimaran Bladerunner 7 (UK), having found some extra boat speed, beating defending champion Sonic (THA) in both races and with it, tying up the series at the half-way point.

In the Thailand Optimist National Championships, six races have been completed so far with three more scheduled for tomorrow.

In Fleet A, the racing is tight and after leading at the end of Day 1, Mic Mohr (Costa Rica) had another good day with a 2,2,8 results to hold onto top place, ahead of a rapidly closely Thai contingent lead by Panwa Boonnak, whose 5,1,1 moves him up to second and tied with Jedtavvee Yongyuennarn on 22 points.

Duncan Gregor, last year's top international youngster, is a little off the pace but still in the running in fourth place.

On the dinghy courses, three more fast and furious races bring the series total to six races completed so far.

Sophia Montgomery (THA) is running away in the Laser 4.7 division (Class 9b). Behind her there's a close battle for second and third places, currently held by Chanokchan Wangsuk and Suchakree Dutthotsapol respectively.

Class 10 is heading for a final day showdown tomorrow with the lead currently tied between Suthon Yampinid (THA) and Sutida Poonpat (THA), both former Thailand Optimist National Champions. Further back is Navee Thamsoontorn, who despite bar mechanical failure, looks to be safe in third.

For more information and results: www.topofthegulfregatta.com