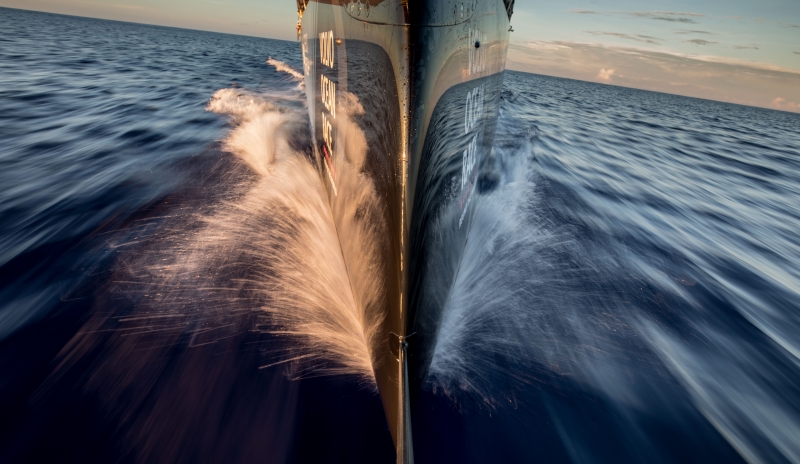 Turn the Tide on Plastic became the new leaders of Leg 6 of the Volvo Ocean Race on Wednesday as the sprint from Hong Kong to Auckland moved inside 1,500 miles.

Dee Caffari’s talented young sailors ghosted past Team Sun Hung Kai/Scallywag as they capitalised on the tiniest puffs of breeze in an otherwise windless Doldrums.

The temporary acceleration from less than a knot to more than four was welcomed by Turn the Tide on Plastic after two days of painstakingly slow progress in the Southern Hemisphere.

The 1300 UTC position update showed a 17-mile lead for Caffari’s crew, no strangers to the top spot in the Doldrums having previously led the fleet through the Intertropical Convergence Zone on Leg 4 from Melbourne to Hong Kong.

But, with around six days still to sail before reaching the Auckland finish line, navigator Nico Lunven was keen to urge caution.

“On the ranking we’re first but it’s calculated on the distance to Auckland,” Lunven explained, “and we won’t be going there a straight line.”

The dilemma facing the teams over the past 48 hours has been where to position themselves as they approach the island chain of Vanuatu.

If and when the new wind arrives it should do so from the east, and Turn the Tide on Plastic’s overnight gain is testament to the advantages on offer from getting it first.

However, as Lunven alluded, the forecast suggests a routing to the west of New Caledonia, some 300 miles to the south, will be quickest.

It could yet be that Scallywag, some 45 miles to the west, and team Akzonobel, another 15 miles past them, leapfrog their rivals into the top spot once more.

After several days in front, conceding any miles to Turn the Tide on Plastic has been a bitter pill to swallow for Dave Witt’s Scallywag crew.

“For us it’s about limiting the damage,” said Scallywag’s Marcus Ashley Jones. “Hopefully we’ll get a little bit of luck with a puff. We’re still in touch, still in the game, but it’s always disappointing to go from being the peacock to the feather duster.”

At times the two teams, first and second on the overall leaderboard, were practically side by side after nearly 4,000 miles of racing.

Although speeds were up around seven knots today, the teams face another 24 hours before they reach New Caledonia and start accelerating towards Auckland, their progress buoyed by stronger winds.

Meanwhile, construction of the Race Village at the Viaduct Basin in Auckland is continuing in anticipation of opening day on Saturday.