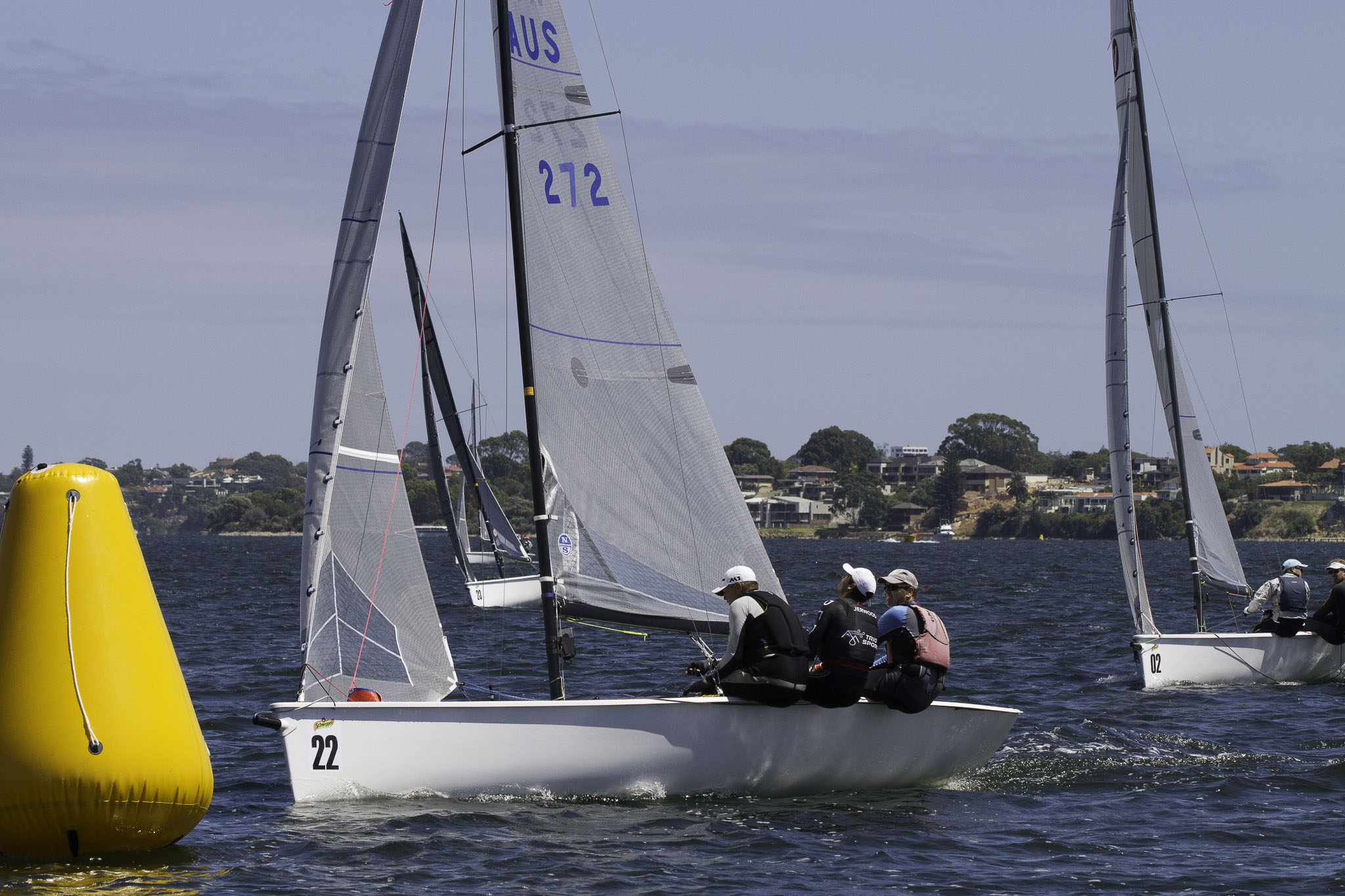 After the second day of the Schweppes Viper Worlds in Perth, Western Australia, a total of eight races have been completed and scores recalculated to include a single drop. A second drop will be allowed if thirteen or more races are completed. Conditions today could hardly have been more different from yesterday. Shifty south easterly breezes rarely reached more than twelve knots, in stark contrast to the 25-plus knots blasting across the Swan River yesterday.

The resilience of this fleet of sports boats is quite amazing. As the survivors limped ashore after four brutal races yesterday, they reviewed the carnage. Six of the 25 boat fleet suffered sufficient damage to force their retirement. There were two dismastings, a broken boom, a holed hull and many minor issues. Amazingly all yachts appeared on the start line today, ready to race, suggesting that some crews had very little sleep last night and the locker containing spares was given a serious raiding by those in need.

It is said locally that the only certainty about Perth’s weather when a tropical cyclone is brewing off the north western coast is that nothing is certain. That is defintely the case this week. With the windward mark at the south eastern extremity of the course, the surrounding land mass created challenging shifts and those who did best were unafraid to throw in a short tack on approach.

Britain’s Lawrence Crispin, who has been sailing exceptionally well, was the beneficiary of a big shift in race 6. Working the right hand side of the course early, along with countryman David Hitchcock, he picked up a shift along the western shoreline allowing him to establish a match winning lead by the time he reached the top mark and bowl away to a convincing win. Hitchcock was less fortunate, swallowed up by the chasing pack and finishing seventh.

The surprise of the regatta, to many except the man himself, has been Flying Fifteen champion Nick Jerwood, who heads the points table after eight races, scoring five wins in the process. His crew includes son Matthew, a prominent skipper on the world match racing circuit and boat owner Brian de Vries. Jerwood has started near the centre of the line in most races and with the exception of a “U” flag disqualification in race 3, has emerged among the leaders each time. His defensive strategy in race 8 was classic. Approaching the finish line with Denis Jones well ahead in a seemingly invincible position, Jerwood found himself locked in a battle with match racer Keith Swinton, Matt Jerwood’s sailing partner Alex Landwehr and American Justin Scott. The final outcome saw New South Welshman Martin Webster steal first place by sailing around the rest of the fleet and flying home in good pressure. Unfortunately an arbitrary penalty cost him his first place. Jones maintained his position and Jerwood, sailing deep after several defensive gybes, was able to crank up the angle on the final approach to narrowly take the points from Landwehr, Swinton and Scott.

With fourteen races scheduled, the regatta is now past the halfway mark. Jerwood would seem the logical favourite from here, but Keith Swinton is a seasoned battler in hard campaigns and remains in contention as does the British champion Lawrence Crispin.