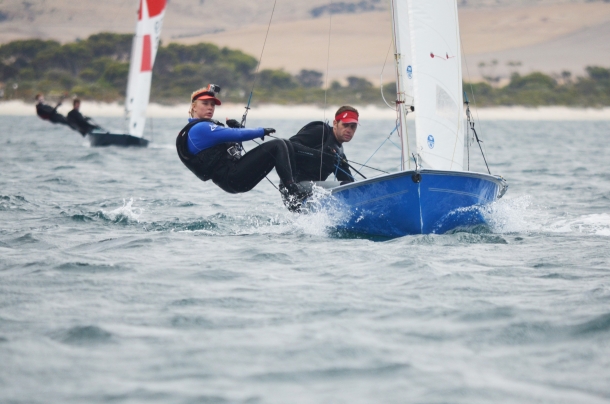 The Tumby Bay Yacht Club hosted a very successful 125 National Championship over the Christmas/New Year break that featured 24 boats from all the mainland states of Australia.

Competition started on the 28th of December 2014 with an Invitational race and continued over seven championship heats until the 4th of January 2015. Tumby Bay turned on the hospitality for the event and it was sailed in a fun and friendly atmosphere that was thoroughly enjoyed by all involved.

On the water the championship was dominated by Luke Johnson and Elizabeth McNeil from the Brisbane Sailing Squadron sailing “J”. They completed a clean sweep of the series winning the Invitational race and all seven championship heats with a dominate display of sailing.

Local sailors Peter and Caleb Henderson sailing Carnivore finished second in the competition with a consistent performance. Also high up in the overall classification were Darian and Jayden Gale from the Coffin Bay Yacht Club sailing Wot Ever who finished fifth.

The Junior Champions were Lauren Henderson and Jade Forbes from the Port Lincoln Yacht Club. They were very impressive in there first major regatta in the 125 class. Lauren also won the award for the leading female skipper.

Andrew Tailor and Frances Clarke from the East Fremantle Yacht Club in Flash 3.0 lead a strong contigent of eight WA boats finishing fourth overall. Heather Brand and Campbell Kilgour from the South of Perth Yacht Club sailing What Eva where big improvers over the regatta and took out the overall handicap competition.

The leading wooden boat trophy was won by Chris and Caleb Trenberth from the Tumby Bay Yacht Club in the newly constructed Knotskok.

Next year the National Titles will be sailed at the Nedlands Yacht Club in Perth, WA.