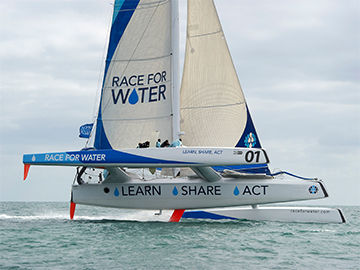 19/03/2015
The Race for Water Odyssey expedition has begun in Bordeaux with an aim to draw up the first global assessment of plastic pollution in oceans. In 300 days, over 40,000 nautical miles will be traveled, punctuated by 11 scientific stopovers and nine outreach stopovers, involving a total of 13 countries.
Race for Water Odyssey (R4WO) has arrived in Bordeaux ahead of an eventful week. On Sunday 15 March, the crew will raise anchor with the intention of gaining knowledge about waste gyres in less than one year. Scientific as well as human, the R4WO also aims to raise awareness about marine pollution – a vital exploit, considering that an estimated 80% of the trash polluting the oceans comes from human activities.

The six-member onboard team will be headed by Marco Simeoni, founder of the Race for Water Foundation and leader of the expedition emphasizes the importance of taking action, and is optimistic.

“Marine plastic pollution is alarming and we must quickly find sustainable collection and valorization solutions. To devise solutions, we must fully understand the problem. I am confident that when we return from this expedition, we will have genuine leads for developing solutions that will preserve our oceans. But drawing up the assessment won't be the end of our mission; the assessment is merely the first phase of a project that will take several years.”

For his part, Stève Ravussin, famous Swiss navigator and skipper of this expedition, can't wait to put his seafaring skills to use, and insists that the situation is urgent:

“The sea has given me so much; it enabled me to make a name for myself. The time has come for me to return the favor by showing the extent to which the sea is suffering from our actions. We come across countless diverse objects on the high seas. In 2012 during the Krys Ocean Race with this same catamaran, my path was obstructed by a drifting container, so I know what I am talking about. It is important to make this known, and I look forward to starting the R4WO to move things forward. Our training sessions in Lorient went well, and the entire team is ready to tackle the trip around the world.”

During the opening stopover in Aquitaine, Race for Water invited the public to a number of activities that were organized in collaboration with the City of Bordeaux and the Maison Ecocitoyenne. Mr. Alain Juppé, Mayor of Bordeaux, insisted on conveying his support for the R4WO, “[Marine plastic] pollution affects every region of the world and has long-lasting consequences on marine ecosystems. Action must be taken immediately, and that is why I insisted on supporting the R4WO, an ambitious expedition that intends to map out and measure the five marine pollution patches across the globe.

“I am extending my full support to the team of explorers and scientists who are committed to this noble project, vital for the future of the planet.”

The festivities begin with the docking of the R4WO at the Richelieu Quay landing with an inauguration of the departure village which will also host dedicated children's events and other entertainment.

The trimaran and her crew will then set sail for Azores, Portugal, the first of the R4WO's eleven scientific stopovers, where the scientific protocol will be deployed for the first time. Before returning to Bordeaux in mid-December 2015, the crew will sail for 300 days in order to draw up an initial global pollution assessment of the “world's biggest trash can”.