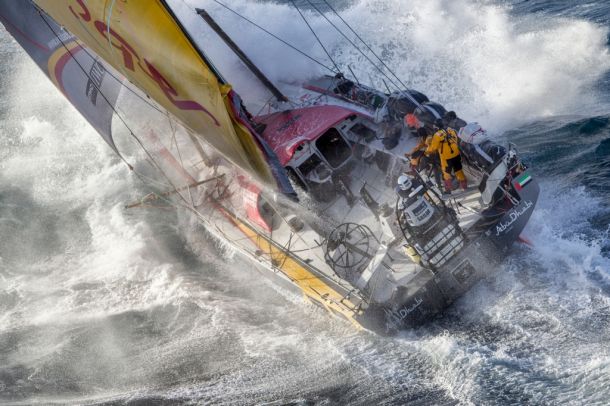 ALICANTE, Spain, March 19 (AFP) – Volvo Ocean Race’s six-strong fleet were stuck in Groundhog Day as they raced through the South Pacific – and they were not particularly enjoying the experience on Thursday. In the famous Hollywood film, the hero played by Bill Murray, finds himself trapped in time over the same 24 hours, and the crews now know exactly how he felt. They found themselves crossing the international dateline, which meant that the clock, for a while, turned back to March 18.

The conditions after passing New Zealand’s East Cape, were hardly conducive to comfortable sailing – 30 knots of wind (56 kilometres per hour) and a much heightened sea state. They have avoided by far the worst of Cyclone Pam, which wrought havoc in the South Pacific towards the end of last week, killing at least 11 on the archipelago of Vanuatu.

That weather system also led to a three-day delay in the departure of the Volvo Ocean Race fleet from Auckland on Wednesday before the 6,776-nautical mile (nm) Leg 5 to Itajaí in south-east Brazil. Nevertheless, they could still feel its aftermath for a very rocky ride early on Thursday. All on board are hardened professional offshore sailors, but many have been reporting severe bouts of seasickness as they speed through the South Pacific towards the Southern Ocean.

Amory Ross (USA), Onboard Reporter for second-placed Team Alvimedica (Charlie Enright/USA), gave a graphic description of life on the boat in his latest dispatch on Thursday. “Even in her subdued state, ‘former’ Cyclone Pam is packing one heck of a punch,” he wrote. “I’d be lying if I said our enthusiasm for getting out here is unchanged. Now that we’re actually here, everyone’s either green or exhausted and often both. The sea state is really confused and it makes doing anything abnormally difficult.

“We talk a lot about racing these boats, the demands and skills it requires. But when the conditions are like they are now, simply living takes considerable effort too.”

Team SCA’s Abby Ehler (GBR) added: “It’s bumpy, it’s wet and it’s wild. It’s like being on a rodeo horse or a rollercoaster. It’s just intense and requires 100 per cent concentration, not only helming, but when you move around.”

The boats are expected to reach their Brazilian destination, in a stage in which they pass the key landmark of Cape Horn, around April 7.