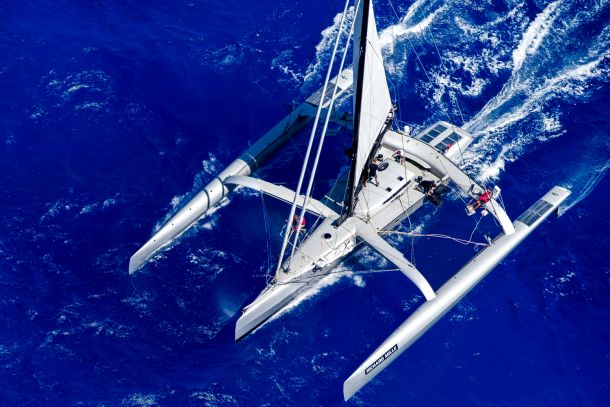 One of the principles behind Les Voiles de St. Barth since the event's creation back in 2010 is that all the boats, whatever their size or rating, are allowed to have free expression. In this way, in addition to the monohull craft, a number of multihulls also participate in the event each year.

The fleet of multihulls competing in Les Voiles de St. Barth is an eclectic one, but the Caribbean Sailing Association (www.csamultihull.com) has thought of everything. Indeed since last year its measurers have implemented a Multihull Ratings Rule. This special system for boats with two or three hulls aims to be more fair and egalitarian in its rating, since it takes into account the daggerboard and weight characteristics in its awarding of handicaps.

This enables a set of very different multihulls to take the same start line, a key factor given that this 2015 edition of the race will, for the first time, play host to Erik Maris' CG 32 Le Carré Diamond Genesis. A 32-foot foiling one-design catamaran launched in late 2012 and designed by Martin Fisher according to an idea by Laurent Lenne, it will compete alongside a 70-foot trimaran.

That 70-foot trimaran is Phaedo3, the former MOD 70 Foncia (launched in August 2011) with which Michel Desjoyeaux set the Round the Island record back in 2012 (two hours, 21 minutes and 25 seconds) shortly before winning the European Tour and finishing second in the Multi One Design Championship. Owned by American Lloyd Thornburg since the winter, the boat recently excelled at the RORC Caribbean 600. Onboard, the famous names include Brian Thompson, Sam Goodchild and Pete Cummings.

Suffice it to say that in elapsed time she will be hard to beat, but victory on corrected time is not necessarily a given – far from it, in fact. “For this particular boat, the courses we’ll be setting will doubtless be a bit small, so consequently it will be interesting to see how boats like Peter Aschenbrenner’s Paradox performs,” explains Poupon.

This 63 footer regularly demonstrates that she is quick and perfectly adept at reaching over 30 knots of boat speed. She really showed what she was made of during the RORC Caribbean 600 2013 while a certain Cam Lewis was aboard.

However, neither Phaedo3 nor Paradox will be able to dawdle along the route if they want to offset their rating difference with regard to their rivals. Indeed, Steven Cucchiaro’s 55’ Gunboat Flow and Chris Groobey's Tocatta 60' won't be there just to make up the numbers. Designed in carbon epoxy to guarantee a lightweight structure, the former includes all the necessary cruising comfort without sacrificing performance in any way.

The same is true for the latter, built in China at Xiamen, which put in her first appearance on the world stage back in 2013, during the International Boat Show in Fort Lauderdale. You get the picture then, in this multihull class at Les Voiles de St. Barth, that there is a little something for everyone and some great surprises in store!