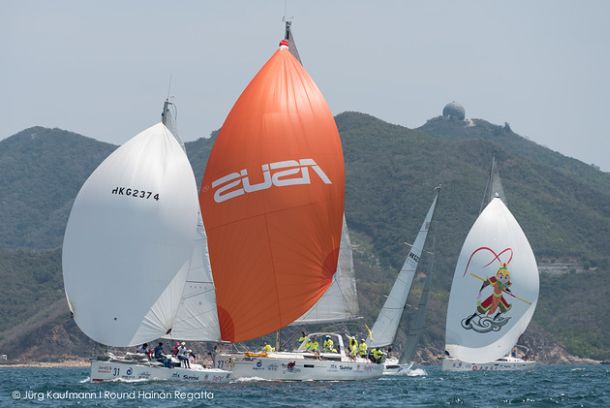 The 6th Round Hainan Regatta kicked off today, Saturday March 21st, with the 43 boat strong fleet eager to fight in the beautiful Bay of Sanya on two windward/leeward races.

In typical tropical conditions, warm weather and shiny blue sky, the first start signal for the bigger boats in class IRC 1 and 2 was fired shortly after 10am, in a light breeze that unfortunately quickly faded away to no more than 5 knots, leaving the Race Committee no choice but to keep the other classes waiting for the wind to build up again.

The debut of the new official charter class RHN Dubois50 was as lucky as it could be with US skipper Jim Johnstone onboard Sanya to grab success in the first race, scoring a win on defending champion Swan 82 UBOX, that despite being over 30 feet longer, did not get enough margin to win in corrected time. XP50 Furi, skippered by Dutchman Martin Hingst closed in third, followed by the other two HNR Dubois50s, Lingshui and Haikou in fourth and fifth respectively whilst smaller 45 footer Aloha, also built by Shenzhen based shipyard Farnova with its young crew representing Qiongzhou University finished in sixth.

“I was impressed by the boat's performance” said Johnstone. “Our crew is made almost of all Chinese sailors we haven't sailed much with before and we only had a couple of days of practice here in Sanya, but the boat is very easy to handle, you need a good bowman and a good cockpit cause it is still a 50 footer and quite powerful. There is still room for improvement, but sure the boat seems to be very fast.”

After waiting for the midday thermal breeze to fill in and getting to a very decent 12 to 14 knots, the Committee decided to launch the second race of the day for all the classes on a W/L course of around 3nm. In the RC1 Sanya confirmed its first excellent performance and scored the day's second victory, second to cross the finish line was Furi followed by the other RHN Dubois 50 Lingshui skippered by Weilong Guo. In IRC2 Old Boy Dream Team bounced back to get its first win in corrected time on Sea Wolf and China Cup 32 that place the local crew on the top spot of the provisional scoreboard.

In the eight yacht strong IRC 3 the win in both elapsed and corrected time went to Hong Kong based Mills 41 Ambush, similarly to class IRC 4 where the Grand Soleil 46 Lianchuang scored its first victory in this year's RHN regatta and so did French skipper Laurence Nicolas on Banshanbandao in IRC5, the smallest boat in the fleet.Simonis Voogd's sleek one-design Fareast18 also made their first appearance in the 6th RHN Regatta today with TSU Primary taking the opening race, I Yundong in second and Black in third.