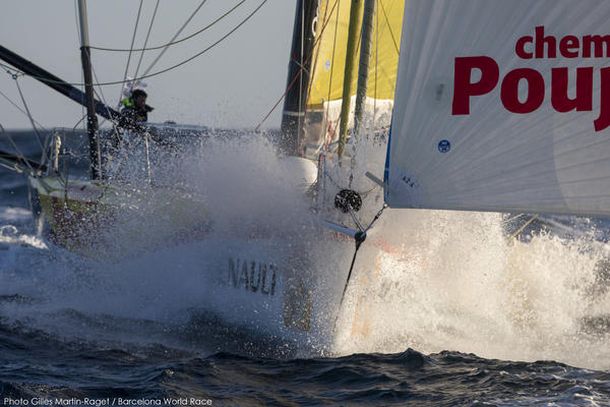 Sunday should see Cheminées Poujoulat in the Mediterranean. Some time Sunday. It is hard to be precise because the Barcelona World leaders Bernard Stamm and Jean Le Cam are forecast to have only light winds for their passage of the Gibraltar Strait and it is quite possible they will be slowed. The likelihood is Sunday afternoon, but don't programme lunch around the Swiss-French duo's return passage off Tarifa.

The race leaders have been setting a good pace today, averaging 15-17kts, and posting a meaningful 24hrs run of 374 miles. They accelerated yesterday as the breeze backed to offer them some fast reaching conditions. But by this Friday evening the wind will drop and continue to back, all the way round from NW to SW. And then all the way to the Straits and beyond it will be just pleasant, modest downwind and reaching.

It's a little point along the way, a measure of mental security for Stamm and Le Cam, conversely an almost inevitable point that will still have piqued Guillermo Altadill and José Munoz on Neutrogena. The leaders are closer to the finish now than Neutrogena are to them.
The Mediterranean looks benign for Sunday to Tuesday, downwind until they turn north, then on the nose and light to the finish. But the current outlook offers a sting in the tail, a feisty Tramontana offshore NE'ly, 30kts for their last night at sea, between Tuesday 24th and Wednesday 25th.

Even taking into account that the course is some 2000 miles shorter than before, and direct, Cheminées Poujoulat has still made good time compared to previous editions. Finishing on the 25th would mean 84 days, nine days quicker than Jean-Pierre Dick and Loick Peyron who finished 4th April 2011 on Virbac-Paprec 3.

It's also interesting to note that this is the first solo or double-handed round the world race since 2008 that all the boats will have rounded Cape Horn and been in the Atlantic when the winner crosses the line.

The battle northwards in the trade winds continues for Neutrogena and GAES Centros Auditovos. The second placed duo have had a couple of knots more windstrength and so been able to make better speeds than Anna Corbella and Gérard Marín. There is still 160 miles north-south between the two.

The match between We Are Water and One Planet, One Ocean & Pharmaton is a slow motion affair in the Doldrums right now, We Are Water trying to cross at a point 130 miles to the west of their rivals. Both have been slow, Aleix Gelabert and Didac Costa making just 0.8kts on the 'instantaneous' 30 mins speed gun this afternoon. Whoever escapes first gains the upper hand for many miles.
Renault Captur are 120 miles off Rio, trying to escape the high pressure and find a lane to the trade winds, averaging 9.9kts for the last 24 hours.

Their fortunes contrast with those of Nandor Fa and Conrad Colman on Spirit of Hungary. They would be forgiven for thinking that having struggled down the Atlantic, so often plagued by light winds, their reward comes now with a favourable climb back up from Cape Horn. That seems to be the case right now, as Conrad Colman explained: “We are on a fine reach at the moment. Charging up behind us is another depression and so we actually have some quite interesting choices ahead as to how best to benefit from that, but the depression behind us is one of the reasons we have chosen this westerly course, because we will see a nice slingshot effect in the next 36 hours or so, we should be getting north to the higher latitudes and get into Saint Helena to get a lift northwards. So I think we have a nice road ahead, so we are looking forwards to just keeping on trucking. The boat's good shape, we still can't use the full main but at the moment that does n ot harm us. The boat is in good shape and so are we.”

Nandor Fa (HUN) Spirit of Hungary: “Conditions are much better for us now since rounding Cape Horn a few days ago, right now we are reaching, speeds are good and now maybe a litle bit everything feels better the temperatures is higher and much more enjoyable than it was at the Horn or before the Horn, we enjoy very much this kind of sailing, going up in the Atlantic, heading north again. It is OK. We have reaching conditions, about 25kts of wind, good speeds we can progress well. It is really nice, it is wet outside, but it is all more favourable than it was.

“We don't look at the others, we do our best, we are on our own way we concentrate on our own route. Personally I don't care where the other boats are, what they are doing.”

Conrad Colman (NZL): “It is nice to be heading north and getting warmer, the world is a warmer place. Nandor and I have a bet running as to what our ETA and so it is certainly nice to see the days count down towards that. We have bet a nice dinner, but judging by how much Nandor and I have seen of each other maybe it should be apart, with our partners!”

Is the race dragging?

“I am sitting under the canopy and watching the skies slowly lighten and anticipating the sun coming up shortly. It does start to feel quite long now, we have been at sea now for quite some time now, even with refreshing things in New Zealand with our short stopover, but I am a sailor at heart, I love being at sea, and so it is nice to be charging across the ocean and I still enjoy that. There are still things I look forward to getting back to my normal life and to see my friends and family again.”

Do you feel closer to the finish because Cheminées Poujoulat is close to home?

“It does not change so much for us. They have been in a completely different universe from us from the start, and so I can congratulate Jean and Bernard on their efforts but they have had a spectacular race, but, frankly, what they do has no bearing on us at the moment.”