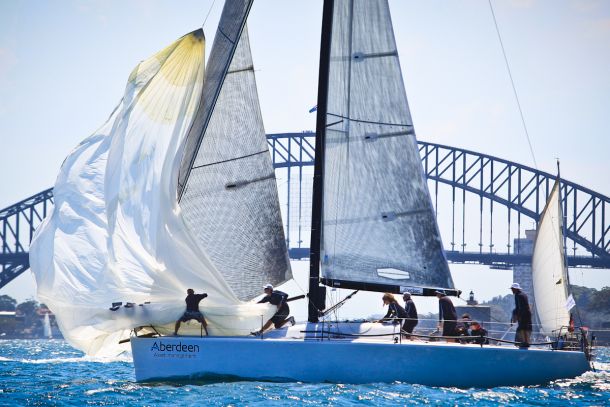 The Farr 40 fleet is preparing for this weekend’s Aberdeen Asset Management NSW Farr 40 title as the precursor to next week’s season finale, the John Calvert-Jones Trophy national title fight when a new Australian one design champion will be declared on Saturday March 28, 2015.

Both Voodoo Chile and Transfusion are ripe for state and nationals glory. At the other end of the yardstick Carl Russett and his Royal Prince Alfred Yacht Club based crew of Windy Too are hopeful of  finishing last fewer times than at the Pittwater regatta in December, the boat’s one design debut.

Given there was more racing than cruising going on, Russett scrapped his previous cruiser/racer, with its two showers and hot and cold running water, and instead opted for an all-out racer. Since then he’s had “nothing but a mountain of fun.”

“We’ve had a wonderful time club racing. With the help of some great sailors the improvement has been significant. Do I think we are anywhere near the level of the good guys going into this weekend? Nowhere near it. But if there was a contest among the Farr 40s with fridges, shore power and fuel gauges, we’d win!”

Guido Belgiorno-Nettis’ Transfusion (MHYC) and Andrew Hunn helming the Tasmanian entry Voodoo Chile (RYCT) are due to pick up from the most recent one design series out of Middle Harbour Yacht Club earlier this month with more fire in the belly. A pointscore reshuffle after a protest decision went against the pair cost Transfusion the regatta win and moved Voodoo into the number one spot. At the time the worse off skipper flagged there’d be no more Mr. Nice Guy.

Rod Jones and his Kindergarten crew have settled comfortably into their first season of Farr 40 racing and Jeff Carter’s Edake and Gordon Ketelbey’s Zen occasionally take one off the top teams.

The forecast for the Royal Sydney Yacht Squadron’s two day series, March 21-22,  is southerly winds 15-20 knots turning east to southeasterly during the morning and the chance of showers on Saturday. Sunday on Sydney Harbour is looking tricky with east to NE winds below 10 knots in the morning.

Russett is feeling more comfortable about his second one design hit out given the slackening trend. “The forecast has eased, which is good for us. I find anything over 14 knots a concern as these boats are so powerful. We have been in 60kts in an offshore race to Long Reef.  It’s one of life’s experiences and there’s not a lot you can do when the mast is in the water and the rudder’s out. Hopefully the weekend brings light airs. The lighter it is the more it’s a lottery, and we might have a chance.”

Tactician for Windy Too is Russell Taylor, apparently “a bit of a luminary at the Squadron and our local knowledge,” says Russett, who already has it all figured out. “Our plan is to head windward at the start and follow the fleet.”

Last year the international Farr 40 association made a provisional promise to grant Sydney the right to host the 2016 Farr 40 World Championship and a location and dates are being determined. Farr 40 class manager Geoff Stagg is in fact in Sydney this week talking to yacht clubs vying to host the prestigious event.

Russett’s not sure this far out whether Windy Too is going to be ready for the class’ A-league, but the good natured skipper has spotted a less obvious opportunity arising from being part of the potential international line-up. “My wife would like me to represent Australia in anything. I could buy a little emblem and put it on a blazer and hang it in the billiard room. You never know….”