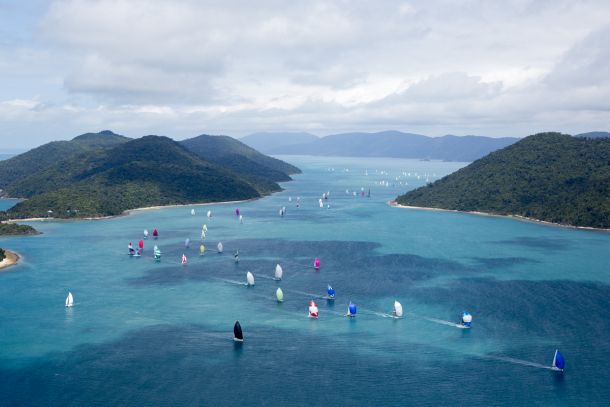 As the entry list for Audi Hamilton Island Race Week 2015 continues to grow at an inspiring rate, the organisers have already excelled when it comes to the party scene, and the launch of the regatta.

They have engaged an amazing Superband to entertain competitors, their families and friends on the opening night, Saturday, August 15.

This impressive gathering of musical talent will comprise Angry Anderson of Rose Tattoo, Sarah McLeod (Superjesus), Simon Meli (The Voice), Mark Gable (The Choirboys), and Guy Delandro (Glitter-Us). And, they will be backed by a five-piece band made up of musicians from the Baby Animals, The Whitlams, Jimmy Barnes’ Band and INXS.
The superband will be saluting the start of Audi Hamilton Island Race Week in a spectacular fashion by bringing the night alive on the open-air stage adjacent to Hamilton Island Yacht Club.

“Audi Hamilton Island Race Week gets bigger and better every year, and this year we are going to launch it like no other in the event’s 32-year history,” said Hamilton Island’s CEO, Olympic and World Champion yachtsman, Glenn Bourke. “This Superband on the opening night will set the scene for what promises to be the most memorable and fun Race Week ever.”

The broad-based appeal of Audi Hamilton Island Race Week is unmatched in Australia and internationally. There is superb trade wind sailing to be enjoyed amid an orb of spectacular tropical islands, dockside parties like no other, post-race waterfront celebrations, and an unsurpassed entertainment agenda.

The entry list for Race Week, which will be staged from August 15 to 22, is already nearing 50. It’s an imposing cross section of yachts, from Grand Prix racers and Rolex Sydney Hobart race winners to passage-makers, simple cruising yachts, sportboats and an impressive array of multihulls.

One of the most recent entries is the Corby 49, Vamp, owned by former Cruising Yacht Club of Australia commodore, David Fuller. She was built by Oyster Yachts in England and launched in 2002. Vamp won her division in the Rolex Sydney Hobart race three years ago.

Fuller said he is more than happy to be returning for his twelfth Race Week because the last time he was there he was watching it from a powerboat: “I hated it. I kept seeing all my sailing mates having so much fun on the water, and I wasn’t part of it. I had to be there.”

For him, the biggest appeal Audi Hamilton Island Race Week holds is the opportunity to sail around so many beautiful islands, the vast majority of which are uninhabited: “The scenery is spectacular and the sailing superb. You can’t beat it.”

And, there are other big bonuses for Fuller at Race Week: “I go back to the very early days of Race Week, so it’s great to return and meet so many old friends, on and off the water. Also, it’s the only regatta I know of where you can thrash a new Audi on the local airport runway.

The crew for Vamp, which will include 1984 Olympian Jamie Wilmot, is so enthusiastic about Audi Hamilton Island Race Week that their navigator, Ken Tuckey, has already created the Vamp website – www.vampathammo.com It’s designed to keep crewmembers, family and supporters informed of preparations during the lead-up period, then, once Race Week starts, they will post updates on their social and sailing efforts.

Hamilton Island is offering special ‘Early Bird’ accommodation rates for the regatta as a bonus to all competitors. Details are posted on the regatta website. This offer is available until April 30.

All information relating to Audi Hamilton Island Race Week 2015 is posted on the regatta website – www.hamiltonislandraceweek.com.au

In 2015, Audi Australia returns as the principal sponsor of Audi Hamilton Island Race Week for an incredible tenth year.  Over the past decade of partnership, Audi and Hamilton Island have worked hand-in-hand to create the most impressive sailing regatta in Australia, with even more activities on offer for sailors and onshore guests alike. This shared vision is based on a joint passion for winning performance, technological innovation and spirited competition.